Turkey is a hub of sacred institutions. Christianity in Turkey has had a long history dating back to the 1st-century AD. There are different Christianity sects, religious orders and different national cultures in Turkey which are reflected in the churches. Out of many, a few types of churches in Turkey are Armenian Apostolic, Anatolia, Armenian Catholic, Armenian Evangelical/Protestant, Greek Orthodox, European Catholic, Anglican and Protestant. Though the Christian population has dwindled, its rich history remains in the form of churches in Turkey.

Take a look at these six majestic churches in the country of Turkey that ought to be on the top of your list. We bet you wouldn’t find such anatolian gems anywhere else in the world. 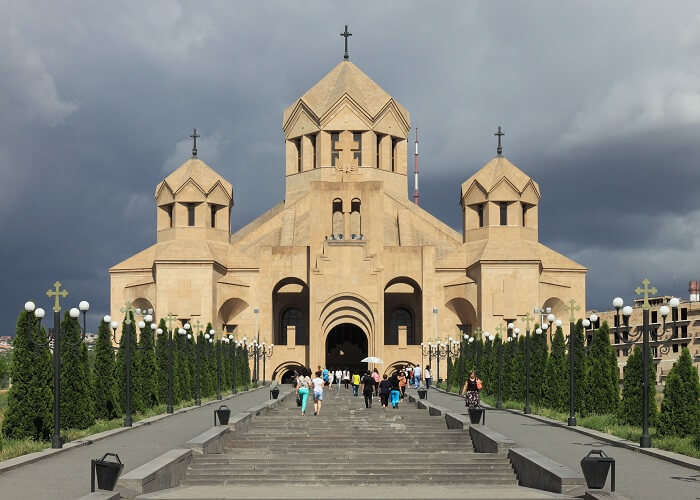 Armenia was the first nation ever to convert to Christianity. This is the great church originated in 301 CE founded by Gregory the Illuminator Apostles Bartholomew and Thaddeus through the apostolic succession confirmed by tradition. This is an Oriental Orthodox church with about 9,000,000 members which makes the largest Christian denomination in Turkey. St. Gregory the Illuminator was the first official governor of this church. Bulgarian St Stephen Church is also known as Bulgarian Iron Church is a famous church in Istanbul region of Turkey due to use of prefabricated cast iron elements in its built. It is a three-domed cross-shaped basilica. This Church is an important part of Bulgarian community. This church was at first made up with wood and later due to fire in 1898 the church was built again by using 500-tonne iron. The architect of this amazing church is Hovsep Aznavour.

Must Read: Street Food In Turkey: 10 Finger-Licking Delicacies That Pamper Foodies Of All Kinds

Also known as Antakya Orthodox Church is the second oldest church in the world and is one of the famous churches in Turkey. It is a classical orthodox church established around 41 AC is dedicated to two important saints in Jerusalem namely St. Peter and St. Paul. The church building was demolished due to an earthquake in 1872 and therefore rebuilt by Russians. The building is rich in Russian architectural style such as three entrances, an antique font, a small beautiful courtyard, plenty of days light inside the church and many essential antic liturgical artefacts, icons. Usually, Churches aren’t open for public worshipping but this place is open for all. This is an important pilgrimage site as every year thousands of Christians visit this church. Before visiting please check if the church is open or not as it is going under restoration for some time.

Must Read: 8 Best Cottages In Turkey For Experiencing The Best Of Luxury, Comfort & Bliss! 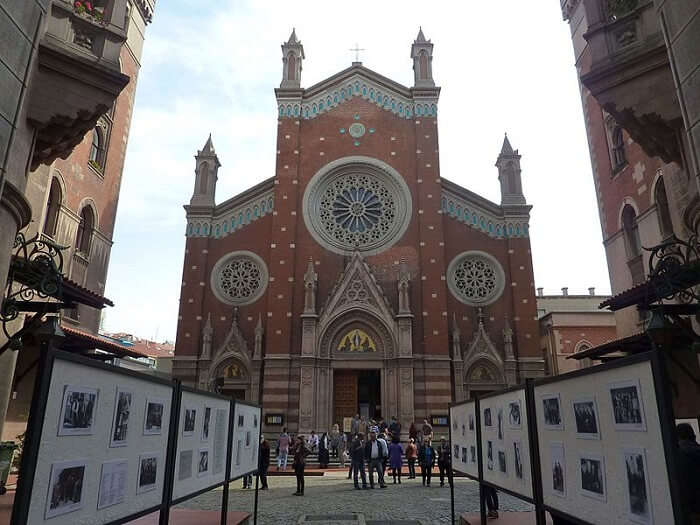 Opened in 1912, Church of St. Anthony of Padua is one of the largest Roman Catholic Church in Istanbul. The other name for this church is Sent Antuan Bazilikası or Sant’Antonio di Padova Church. The original church was built in 1725 by the local Italian community but it was demolished due to certain reasons and new Church of St. Anthony of Padua was built. This church is considered to be a minor basilica type and run by a few Italian Priests. This is the most important Catholic Church in the Istanbul region of Turkey with the largest community following. 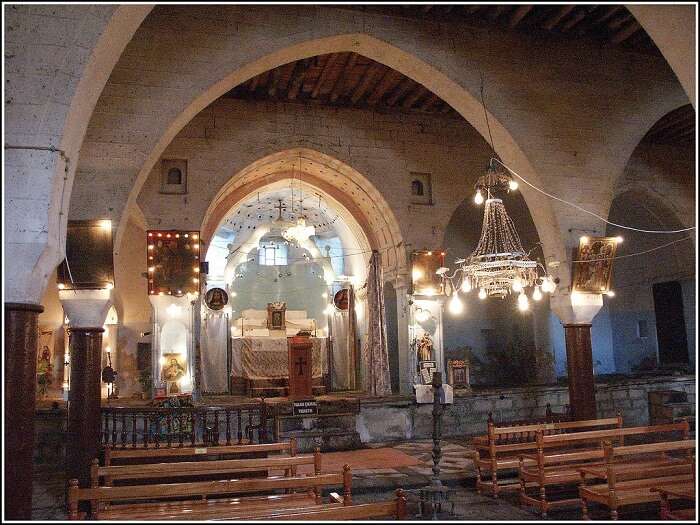 Also known as A Chaldean Catholic Church is a 17-century church located in the old city region of Istanbul. The church belongs to the Chaldean Eastern Catholic Church is exceptionally beautiful and visual treat. One of the most beautiful parts of this church is a four-legged minaret in Diyarbakı. The Church is a unique cultural heritage site which is highly well maintained. The walls, light points and altar of this church tend to leave a huge sacred impact on the mind of the visitor. This church structure is built using black basalt stone during construction. Since 1681, it is said that this church is serving as an Amid Keldani Church. It is one of the richest historical remains of Diyarbakı near the Seyh Mutahhar Mosque. 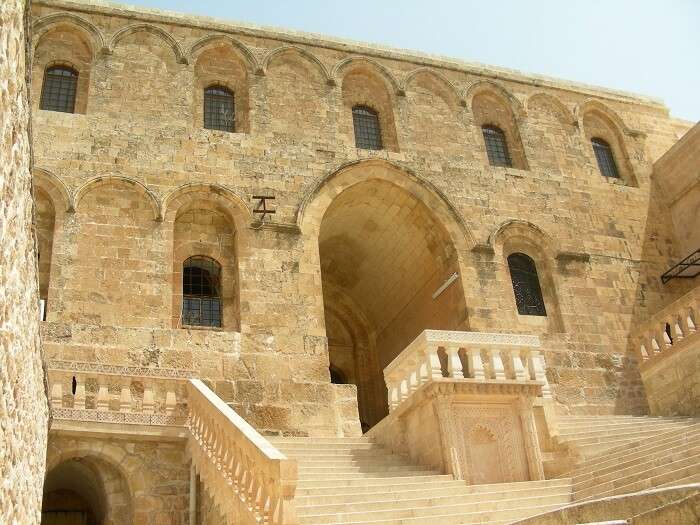 Also Known as the Mor Hananyo or Saffron monastery or the Monastery Church was built in 493AD for the Syriac Orthodox (Assyrian) Christians sect. The Deyrulzafaran Monastery Church is a main tourist attraction of turkey. Also, it is one of the oldest monasteries in the south Turkey region. This monastery had undergone restoration in the year 2007. This monastery is in marvellous condition with amazing beautiful items on display such as old bibles and an old cellar which was used by people for worshipping at the time when the building was a sun temple. There are two churches inside this monastery. The first one is Mor Hananyo built was Syriac architects namely Theodosius and Theodore. The main attraction of this church is larger and magnificent dome.

Further Read: 23 Intoxicating Things To Do In Turkey That Will Sink Deep Into Your Soul

Hope this article has helped you in finding some of the amazing facts about the great churches in Turkey.. So, the next time you are out for your trip to Turkey, do not forget to check out the beautiful churches.

What are some of the most famous churches in Turkey?

Even though people from different religions constitute the population of Turkey, there is a strong Christian influence out there that cannot be denied. Some of the famous churches located there are The Armenian Apostolic Church, Bulgarian St. Stephen Church, St. Paul Orthodox Church, and the Church of St. Anthony of Padua.

What are some of the catholic churches in Turkey?

Several Catholic churches in Turkey are quite popular all around the world. Some of them are Mar Petyun Chaldean Church, Church of St. Anthony of Padua, and many more.

What are the famous orthodox churches in Turkey?

Most of the churches in Turkey are orthodox churches and some of the most famous ones are Antakya Orthodox Church and The Armenian Apostolic Church.

What are the most famous historical churches in Turkey?

Some churches in Turkey hold strong significance in Turkey’s history. Some of the historically significant churches located in Turkey are The Armenian Apostolic Church, Bulgarian St. Stephen Church, Mar Petyun Chaldean Church, and many more.

What is the first-ever church in Turkey?

The Armenian Apostolic Church is the oldest church that was built in Turkey.

When is the best time to visit Turkey?

Turkey has fantastic weather all year round. But the right time to go there is between April and May or September to November. You will be able to explore the place quite comfortably.

How many days are enough to explore Turkey?

You can explore the entirety of Turkey within 12 days. If you do not have much time, you can even cover the place within 10 days. It entirely depends upon how many places you are going to cover.