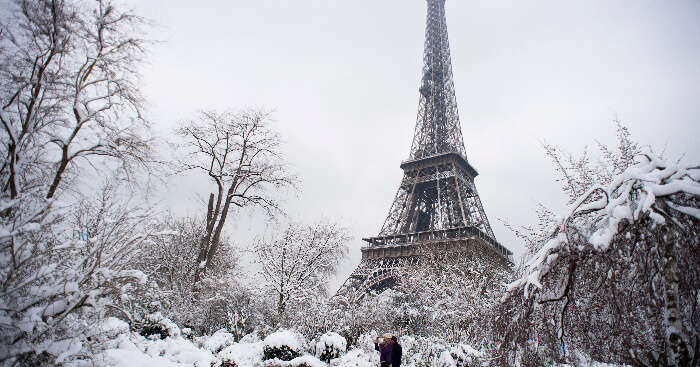 The Eiffel Tower is turning away tourists as a thick blanket of snow has covered the entire northern France, creating transport chaos in Paris. According to the company that runs this 19th-century wonder, the tower has been closed to ensure the safety of visitors.

Hundreds of drivers in cars got trapped in the snowfall and caused worst-ever traffic jams in the area surrounding Paris. Workers were seen clearing snow from Eiffel Tower’s intricate ironwork, stairs, and platforms.

Snowfall caused a heavy traffic jam in the city.

French authorities have told drivers in Paris to not come on roads until Friday due to the harsh weather. Also, officials has already warned of dangerous conditions in one-fourth of France.

Even after all this havoc, some tourists are appreciating the freak weather of Paris and how beautiful the tower looks in snow. People were seen enjoying the crazy weather on streets. Also, some flights from Paris airports were also cancelled or delayed.

Further Read: Paris In Winter: All That You Can Do In This Winter Wonderland