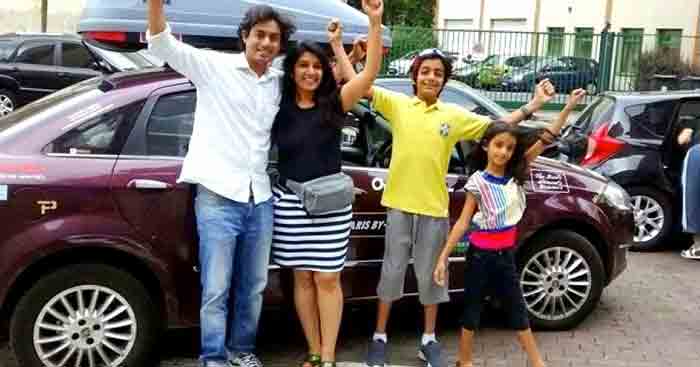 A road trip from Bengaluru to Paris with family sounds impossible right?But they did it and it was one hell of a journey!

Meet Anand and his wife Punita who took a road trip with their kids from Bengaluru to Paris in 111 days. They covered 22,780 kms and more than 50 cities in their sedan – Fiat Linea! Also let’s just take a bow to their epic parenting and driving skills which made their journey such a stellar success. (Yes, the kids were awesome too!)

But why would anyone want to take this crazy trip?

It all started when the family took a road trip from Bangalore to Rajasthan and the idea of a transcontinental road trip struck Anand’s mind. It would be a fascinating experience and Anand wanted to pursue it. Moreover, the timing for him was also perfect since he had recently quit his job for his own entrepreneurial venture.

But wait, there was his family involved too!

So Anand weighed in on the pros and cons before presenting the plan to his wife and kids. He also knew that getting permission for leaves from their kid’s school would be more difficult than the visa formalities of Iran and Uzbekistan!

But somehow, it happened, the school authorities were more than delighted and open to such an amazing and ambitious trip plan! The wife too, had agreed! THE TRIP WAS ON!

How did they do it?

Suggested Read: 20 Best Countries To Visit In The World In 2021

The Baid’s raised capital for their trip from over 14 countries and well wishers. They gave themselves a name and a purpose “Little Indian Family of Explorers or L.I.F.E” and were now ready for the road trip of a lifetime!

So after exchanging almost 2500 emails and coordinating with 12 different embassies, the family was all set.

Packed with all the essential supplies including medicines, they got their Fiat Linea serviced one last time and set off.

Suggested Read: 23 Year Old Backpacker Makes Sketches Of Each City He Visits & The Results Are Surreal!

The route that they chose was also crafted as per his family member’s interest for example Punita wanted to see Paris and Yash was a fan of the football team FC Barcelona – so they made a detour to Spain.

What did they experience?

Calling this trip as a fulfillment of destiny, Anand believes that since the whole universe conspired for it to happen – that same universe also made sure they met wonderful people on their journey!

Wherever they went, they found kindness and help with the best one being a woman in Uzbekistan paying for their entire meal without them even knowing about it! Any why? Because she loved India and the Taj Mahal.

However their journey wasn’t as smooth as imagined (obviously). Meals were a challenge but they managed, thanks to the impeccable cooking skills of Punita.

“She would whip up something amazing from the basic ingredients on the portable stove every time we were hungry”.

Apart from this, they faced a major challenge during the earthquakes in Nepal.

“Being trapped in Nepal during the earthquake was an extremely scary situation. We were at the bottom of a valley and rocks kept falling from above for five days straight. Somehow, we managed to get out alive.”

Moving on from scary situations, for Team L.I.F.E, the whole journey was about self discovery and self realization.
“Sometimes you have to journey far from home to find out who you really are. Because we were witnessing so many things at once, there wasn’t any time to assimilate what was happening to us. It’s only after we came back did we understand that we had all grown as individuals. The greatest thing about travel is that while your physical boundaries have stretched, it’s the horizons inside of you that expand, to encompass the world you witnessed.”

Suggested Read: You Must Not Indulge In These 16 Things While Traveling

To inspire families and travelers who wish to embark on exciting journeys, Punita and Anand give out some really valuable tips:

Surely, as witnessed by the Baid family, the best and most fruitful experiences in the world come from travel only and that is all L.I.F.E is about.

Visit These Most Dangerous Places In The World That Are Not For The Faint-Hearted In 2021!