7 Festivals In Barcelona One Must Attend To Witness The Extravagant Culture Of This Vibrant City! 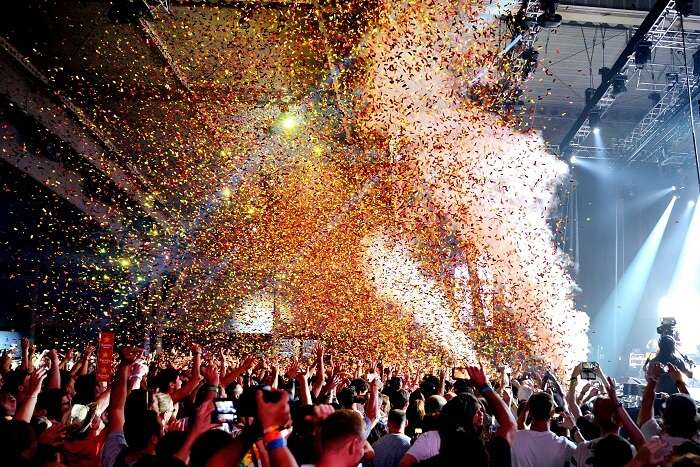 Barcelona, the capital and largest city of Catalonia besides being the second most populous municipality in the country of Spain, has been a tourist attraction for a long time. It has the world’s leading trade fair and cultural centers and its contribution to the fields of art, science, media, entertainment, and fashion contribute to it being one of the world’s major global cities.

Home to some of the most enthralling and invigorating festivals, it can get overwhelming when it comes to deciding where to head first for being a part of all the festivities which happens round the year. So, to save you from all the confusion here is a list of 7 exquisite festivals in Barcelona that you cannot miss when in this beautiful city.

Dia de Sant Jordi or Saint George’s Day is a special day of romance and literature and for all the romantically inclined individuals out there, this proves itself to be a beautiful experience. The streets of Barcelona are lined with vendors selling fragrant roses, also giving the day another name: The Day of the Rose or “El Dia de la Rosa The legend of Saint George, who slew a dragon to save a princess and then pluck a red rose for the her, is the inspiration for this festivals. It also pays homage to literature.

Must Read: A Guide To Barcelona In March: A Traveller’s Paradise

Racing enthusiasts all over the world are familiar with the legendary Formula One Spanish Grand Prix. Also called the Circuit de Barcelona-Catalunya, this thrilling race-track spans over a length of 4655 km just outside the vibrant city of Barcelona. Proven to be challenging and exciting, this is a must watch for anyone seeking an adrenaline rush. With a host of purchasing options for new visitors and returning racing aficionados alike, there is something for everyone at the Formula One Spanish Grand Prix.

With the tagline “Music, Creativity & Technology,” Festival de Sonar is one of the biggest music festivals in Barcelona. The Sonar festival seeks to create a wonderful atmosphere by revelling in the creativity of music brought to life by technology. You guessed it, Electronic music!

Sonar plays host to budding musicians and DJs while also honouring timeless legends. It prides itself on its commitment to being a global event and a meeting point for creative people from different disciplines and communities. With the activities of the festival divided into Sonar by Day at Fira Montjuic and Sonar by Night at Fira Gran Via de L’Hospitalet, there is enough to satisfy your craving for music and culture.

The Grec Festival in Barcelona has 40 years of history and is the leading producer of shows in Spain. One of the most vibrant events in the city, it celebrates the fields of music, dance, theatre and circus. It is a month-long festival filled with endless fiestas and artistic events hosting entertainers from all over the world. Grec Festival de Barcelona prides itself on providing “a performance for each spectator.” Irrespective of your cultural or artistic inclinations, there is something for everyone at El Grec!

When: July in 2018, To be confirmed in 2019
Duration: One month
Cost: Individual events have different prices. Season tickets can be purchased with discounts available. Prices will be disclosed soon.

Festa de la Merce is held in honour of Mare de Deu de la Merce, the Patron Saint of Barcelona and is often called the Festival of festivals. With hundreds of activities on the street, it is advisable to leave all forms of transportation at home and hit the streets with your pals for a night of revelry and fun. Most notably, the Correfoc, also called the fire run, is a significant portion of the festival. It is recommended that you take protective clothing to save from fireworks that are sprayed into the crowds. The Festa de la Merce begins with an opening ceremony procession, ‘Seguici Inaugural’ and is followed by a host of different events including concerts, human towers, parades and even a 10 km run!

Festa de Sant Medir is celebrated every year on March 3rd and involves the giving of tonnes of sweets and toffees to the public from horses, floats, and lorries during a procession. Intrigued? The origins of the festival can be traced back to 1828 when a baker by the name of Josep Vidal i Granes promised that he would go on a pilgrimage if he recovered from an illness. Upon recovery and return from the pilgrimage, he threw beans to the public in honour of a Saint. Over the years, beans were replaced by candy giving rise to one of the most delicious festivals ever!

The Barcelona Carnival is celebrated seven weeks following the winter solstice, after the first full moon. The carnival involves L’arribo, La rua, and L’enterro. L’arribo or ‘Fat Thursday’ is the first day of the Carnival when the King of Carnival (Carnestoltes) enters Barcelona magnificently. It hosts multiple parades and festivities that last all day, La rua. L’enterro, Ash Wednesday, signifies the end of the Carnival with the burial of the King. A satirical funeral procession is organized and the King bids farewell to the celebrations until next year. The Barcelona Carnival is the epitome of festivity and indulgence.

Further Read: 15 Best Things To Do In Barcelona That Are Enough To Relish The Real Taste Of Spain!

With this list at hand, it should be easy for the travelers to decide what festivals in Barcelona 2019 they want to attend. Whether you lean towards music festivals in Barcelona or anything else, there is something for everyone here! If you can’t wait anymore after knowing about these festivals, then pack up and plan your Spain holiday with TravelTriangle and immerse yourself into this fiesta vibe.