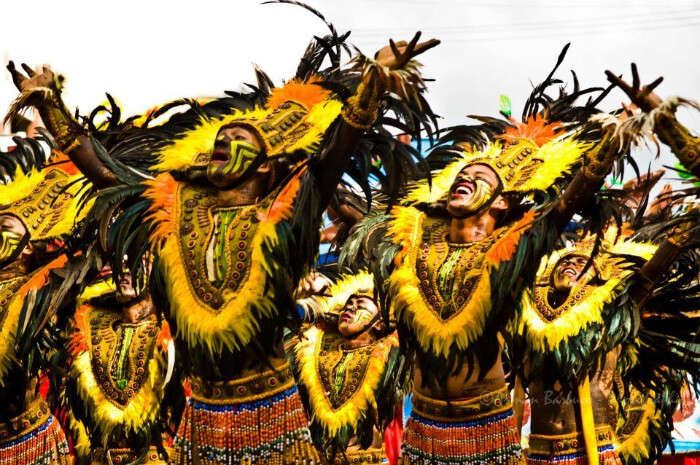 Filipino culture is well known for its fun and festivities. Festivals are so intricately woven into the cultural ethos of the Philippines that every month of the year witnesses some kind of festival in this country. Tourists throng this nation to partake of their cultural celebrations and joyous ecstasies in different festivals.
Let’s look at some of the most frolicsome festivals in Philippines that bring out the grandeur, and merriment of its culture.

12 most popular festivals in Philippines

Take a look at some of the popular Philippines festivals each month. Soak in the Filipino culture while holidaying there like never before!

Come January, people begin preparing for the Christian festival that commemorates Santo Niño (Infant Jesus). The town of Kalibo, Aklan in the Panay Island rejoices in the exultations of this festival as people celebrate by performing tribal dance and music in the parade along the streets.

The festival begins with the opening mass for Santo Niño in the Church on the third Sunday of January, and the revelry lasts for the next week.

Must Read: 8 Fascinating Things To Do In Manila To Savor The Best Of Philippines’ Culture

Malaybalay City, Bukidnon is the venue for its extraordinary festival beginning in the second half of February and extends to March 10. This one-of-its-kind jubilation glorifies culture and tradition of seven ethnic Filipino tribes of the province.

This festival is an amalgamation of a thanksgiving ritual for good harvest, a peace pact amongst all the tribes, a datuship ritual and a wedding ceremony. Tribal dances elevate the conviviality and gaiety in the atmosphere.

March brings in its wake the resplendent festival of Anibina Bulawanun that lasts for a week. The name ‘Anibina’ consists of two terms, ‘Ani’ meaning ‘harvest’ and ‘bina’ indicating ‘gold veins.’ As the name suggests, the festival rejoices in the abundant agricultural harvest in the Compostela Valley, famous for its mineral deposits.

The festival intertwines in the exultations the different themes highlighting the natural prosperity of Compostela Province.

When: 8th of March, 2022
Where: Compostela Province
Festival duration: 8 Days

April sees masked men and women in costumes resembling those of biblical Roma soldiers during Moriones Festival in the island of Marinduque in the Philippines. This festival is a motley of rituals as it depicts the story of the Passion of Christ. It has derived its name from the masks worn by people as these were known as Morion helmets.

People reminisce the sacrifice of Jesus Christ and chant verses from the Bible. They also act out the suffering of the Christ. The Festival begins on Holy Monday and ends on Easter Sunday.

Suggested Read: 10 Best Beaches In Philippines For The Love Of Sun, Surf, And Sand

This is a month-long festival held in the entire country in the month of May. People evoke their devotions for Blessed Virgin Mary and glorify the finding of the True Cross by Helena of Constantinople and Constantine the Great.

People organize processions through the streets and march dressed as Biblical figures. As part of rituals, people recite the rosary and offer flowers and prayers to an image of Mary every night. After the procession and rituals, people share food and snacks. This is one of the unique festivals in Philippines.

When: May, 2022
Where: Whole Country
Festival duration: 1 month

The Pineapple Festival is held every year from June 15 to June 24 in the Daet district. It celebrates a unique variety of pineapple fruit only produced in this region and is called ‘Queen of Formosa.’ People take out colorful parades, where they march and dance in the streets in fanciful costumes.

The dances and celebrations are choreographed, rehearsed and present an engaging sight to the onlookers. The festival uplifts the art and culture of the region and also gives a boost to its agricultural industry.

Just as July knocks on the door comes Bocaue River Festival in the town of Bocaue in Bulacan. Held on the first Sunday of July, it commemorates the discovery of the miraculous cross floating on the Bocaue River 200 years ago.

People create a replica of this cross and parade it through the streets of the city. A procession is also taken down the river with a huge elaborately decorated pagoda float.

When: 3rd July, 2022
Where: Bocaue in Bulacan
Festival duration: 1 day

August welcomes Pangapog Festival in Samal City, Davao del Norte. Held from 1st to 7th of August, people offer thanksgiving for the abundant harvest in this festival. The festival begins with ‘Panawag Tawag’ ritual performed by Babaylan Teresita Lugam in Sama tongue. This succeeds with revelries and rejoicing that includes a brilliant motorcade accompanied by singing and dancing.

Hin-Ay or Paray festival is celebrated by the land-locked, rice-producing community of Irosin, Sorsogon as thanksgiving for the rich harvest. The festival lasts for the entire month of September and ends with the feast of St. Michael the Archangel – the patron saint of the local parish church – on September 29. The festival highlights three themes through its activities: harvest festival, street dancing, and culture and sports.

10. Halaran Festival: Travel Back in Time

The arrival of October brings the festival of Halaran in Roxas City, Capiz. Depicting the kaleidoscopic history of the Capizeños, the events held during this festival take people back to the earliest time of settlement of the Bornean Datus.

The festival lasts the whole first week of October and raises the high spirits through eating, drinking and dancing to the resonant beat of drums.

11. Pintaflores: Exulting in the beauty of flowers

November brings to the city of San Carlos, the delightful festival of Pintaflores or flower tattoos. This gorgeous festival explodes in bright hues as people dance with their bodies painted in different colors and wearing floral costumes. It is held from November 3 to November 5 and reminisces the beginnings of San Carlos.

December gets illuminated by the Giant Lantern Festival held for the entire month in the city of San Fernando. Its giant lanterns give this festival subtle and mesmerizing charm and it also features competition of such lanterns. San Fernando City got the nickname of ‘Christmas Capital of the Philippines’ because of this festival.

Further Read: Labassin Waterfall Restaurant In Philippines Is The Next Hot Place To Try Filipino Cuisine

With plenty of famous festivals in Philippines to celebrate, you can bask in the jovial ardor & feel the high spirits the beautiful country. Plan a trip to Asia during any month & experience the bliss.

What are the main holidays in Philippines?

New Year’s day, Independence day, Good friday are some of the main holidays in Philippines.

What is the biggest festival in the Philippines?

Some of the biggest festivals in Philippines are Ati Atihan, Sinulog festival and more.