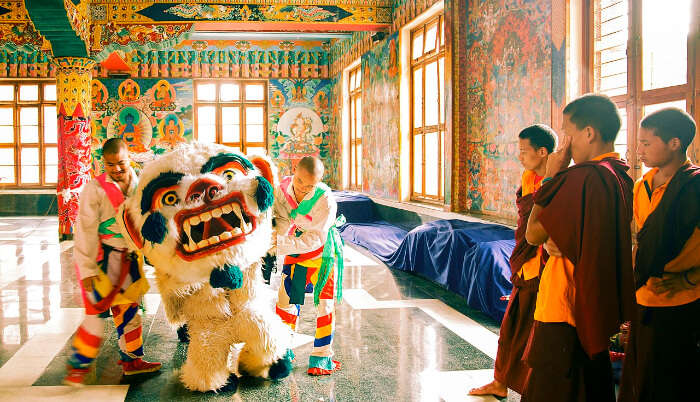 Ladakh is a destination in India that attracts thousands of tourists every year, the crowd pulling attractions here are plenty apart from the scenic terrain and the breathtaking landscape. Marking the beginning of a new year in Ladakh, Losar festival Ladakh is one of the most prominent festivals of Ladakh. It’s a religious festival in the land dominated by Buddhists and monks, this Tibetan Buddhist festival is celebrated for fifteen days at a stretch with lots of enthusiasm in the Tibetan community. Let’s have a closer look at what this festival is about and why is it celebrated?

About Losar Festival in Ladakh

Every year, Ladakh is transformed into a melting pot of culture, vibrant colours and hypnotising chanting prayers that fill the atmosphere of this arid land, truly a paradise on earth. The Losar festival of Ladakh is a much awaited festival that is one of the major Tibetan Buddhist festivals celebrated with performances of traditional songs and folk dances of the region. The Losar festival in Ladakh is an annual event that witnesses an outburst of devotion, joy and positivity. The Losar festival in Ladakh is celebrated on a high scale that lasts for about 15 days, from the start of the Tibetan lunar calendar. Majorly, Losar Festival Ladakh is to celebrate the onset of the New Year in the traditional schedule of Tibetan Buddhism.

Must Read: 12 Festivals Of Ladakh In 2021 That Celebrate The Life In The Valley

How Is The Losar Festival Ladakh Celebrated?

During the festival, the Ladakhi Buddhists make a religious offering before their deities and perform an amalgamation of ancient rituals, cultural events in the from of traditional performances. Expect chanting with blazing fire torches, a battle between good and evil, the Kings and ministers. This interesting show of events is a must watch and a once in a lifetime experience that will be witnessed by music, dancing, a feast with your friends and family and lots of happiness beyond your imagination.

Suggested Read: 17 Best Things To Do In Ladakh That You Can’t Afford To Miss In 2021!

Where Is The Losar Festival Celebrated?

The losar festival is celebrated in Ladakh, it is celebrated all over Ladakh by the followers of the Tibetan Buddhist faith. You can witness the ceremonies being performed in several monasteries of Ladakh and all over the region.

The Losar festival dates back to the pre-Buddhist era in Tibet. The story behind these festivities goes back to the 17th century when Buddhism arrived in Tibet and the incense-burning custom of the Bon religion merged with the harvest festival to form the annual Losar festival in Ladakh during the reign of the 9th Tibetan King, Pude Gungyal. The celebrations usually begin with a Metho ceremony with a procession of people chanting prayers and carrying flame torches. It is believed to cleanse the evil spirits and the negativity that was accumulated in the entire year. The preparations begin a month in advance of the festival, the locals start with cleaning their houses and discarding the old materials, unused items so that all evil omens are chased away from their life to maintain the prosperity and harmony. The entire region is decorated with flashy and bright colours, and rehearsals take place at various venues.

Suggested Read: Magnetic Hill In Ladakh: A Handy Guide To Unravel This Mystery In 2021

Why Is The Losar Festival Celebrated?

Further Read: 10 Astounding Treks In Ladakh That Need To Be On Every Hiker’s Bucket List In 2021

Are you all set to chase away the evil spirits and bring in the new year with these kind people? Bring in 2021 with lots of joy and happiness, exchange culture with the locals of Ladakh and celebrate the Losar festival in Ladakh this new year! Join in the festive celebrations, witness the music, dance, traditional performances and the exciting battle between good and evil at the Losar festival Ladakh in 2021! Plan a trip to Ladakh, the Land of High Passes and witness the most surreal and culture driven festival in India.

Q. How is the weather in Ladakh for most part of the year?

A. The weather in Ladakh is cold most of the time. It can even decrease up to 0 degrees Celsius and sometimes it can even be in minus.

Q. In what time of the year the Losar festival would take place in Ladakh?

A. The Losar festival Ladakh will take place in December. It would last for 15 days and would accept people from all over the world.

Q. Does anybody need to pay an entry fee to go to the festival?

A. No there is no entry fee for Losar festival. One just needs to take care of the travelling, food and living expenses when they come to enjoy this festival.

Q. What is the language that people speak in Ladakh?

Q. Which is the famous dance form of Ladakh?

A. The famous dance form of Ladakh is called as Jabro. It is performed by both men as well as by women in any festival or any occasion. It is a kind of a community dance of nomadic people that has somewhat Tibetan origin.

A. Ladakh is famous for its scenic beauty, Buddhist monasteries, weather conditions, adventurous and exciting spots, and many other such things. It is one of the most soothing places in India.

Q. Is Ladakh a costly destination?

A. Yes, Ladakh is somewhat costly mainly because of its geographical location. Everything becomes comparatively expensive in such hilly regions and so the travels and tour are also costly but it is worth visiting at least once.

Q. What is the best time to visit Ladakh?

A. You can visit Ladakh at any time of the year. The place has its beauty and specialty in all the months. So different months have their beauty and benefits so people can go to Ladakh whenever they want.

Leh Ladakh Bike Trip 2021: Everything You Need To Know From The Scratch

Top 12 Summer Festivals In India You Must Plan Attending In 2020!

Christmas In Miami: 12 Fun Activities To Make The Most Of 2021 Winter Celebrations