Food Festivals In Las Vegas: 7 Events That Are Perfect To Indulge In The Best Delicacies 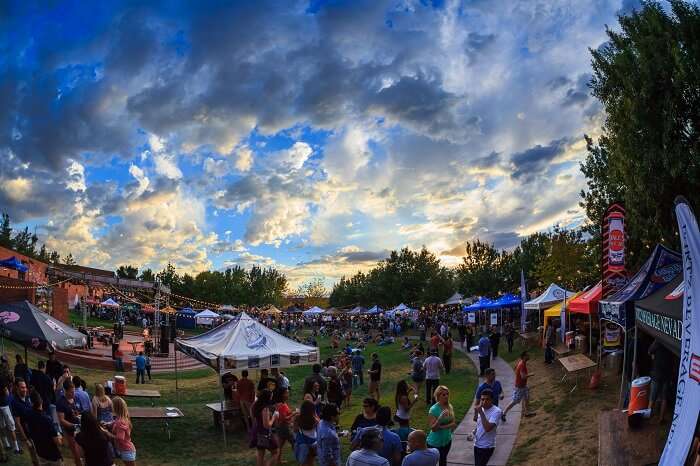 While Las Vegas has always been high on the entertainment quotient (read casinos and partying), it’s eclectic food scene will sweep you off your feet! Believe us, the dizzying variety of food here will overwhelm you, so take some time to research and then make the right choice! While the best restaurants on the Strip are a must-visit, don’t forget to make a stop at these food festivals that will keep you drooling!

Be it Greek, Italian or Indian, Las Vegas is where your taste buds will have a rollicking time! Yes, you heard it right – the sheer variety of food festivals here will completely win you over. Here’s a lowdown of the best food festivals in town:

This festival that’s spread over two days features a range of cuisines and some great spirits! It is headlined by the best chefs, including Francois Payard and Saipin Chutima, so get ready to take your taste buds on a ride! The most popular restaurants in the city serve their signature dishes, so work up your appetite to sample as much as you can. The beverage selection here, including beer and wine along with other spirits, complements the food. Make sure you be there on time as the festival kick starts at 9 am each evening.
Location: Tivoli Village 420 S Rampart Blvd, Las Vegas, NV
Dates: October every year

Must Read: 8 Best Villas In Las Vegas For A Luxurious Stay In This Bling City

This one is sure to interest you, after all it brings together some of the best food trucks in town! Make sure you try Fukuburger, one of Las Vegas’ staples or gorge on some delicious steak at the Picanha Steak Truck. Save up some space for dessert, because the Great American Funnel Cakes will blow your mind! No matter what you mind, there’s a food truck serving your favourite food. Apart from this, there are fun rides, a beer garden and some competitions too!
Location: Sunset Station, 1301 W.Sunset Road, Henderson, NV
Dates: April every year

Suggested Read: 10 Most Famous Restaurants In Las Vegas You Must Drop By

The Las Vegas Festival is the largest Indian food festival that showcases the culinary heritage of India. While food is the big attraction here, it is also the celebration of Indian folk traditions and cultural diversity that draws visitors to the event. Leave some space to hog on the best delicacies of India – jalebi, rasgullas, chole bhature and biryani. There are also spectacular performances by musicians and dancers that are so colourful and a visual treat for the eyes!
Location: Clark County Amphitheater, 500 S Grand Central Parkway, Las Vegas, NV
Dates: May every year

This one is a big draw for beer lovers and rightly so; after all, there are over 200 beers on offer at the Downtown Brew Festival. There are close to sixty outlets serving the best brews, including some of the local favourites like CraftHaus, Big Dog’s and Ellis Island. Your ticket includes unlimited beer samples; for food, you can take your pick from the various stalls set up by local eateries. You surely can’t miss this festival for anything in the world!
Location: Clark County Amphitheater, Las Vegas, NV
Dates: October every year

Suggested Read: Las Vegas Travel Guide: All About The Visa, Packing And Places That You Should Explore!

This is the largest Italian food and music festival that’s held twice a year in honour of Saint Gennaro, the Patron Saint of Naples in Italy. The food here is to die for, but there’s also a lot of arts and crafts as well as home exhibits that are eye-catching! While you are giving food a break, go get your face painted or raise your adrenaline on some of the scary amusement rides – you won’t get bored here even for a single minute! They say each edition of the festival out does the other, so there’s a lot to look forward to in 2021!
Location: 4111 Boulder Hwy, Las Vegas, NV
Dates: May and September every year

The first Las Vegas Greek Food Festival was held all the way back in 1973 at the Stardust Hotel. Ever since, this one features among the best festivals in town. It’s a celebration of Greek culture, by way of delicious food, music, dance and other entertainment options on offer! The proceeds of this event go to local non-profit organisations; so, you know it’s for a good cause as well!
Location: St John Baptist Greek Orthodox Church, Las Vegas, Nevada
Dates: September every year

Much famed to be the only beer festival that is held for the longest period of time, Brew’s Best is one of the best festival in Southern Nevada. This festival witnesses participation from the best local and national breweries, so you can spend all day sampling the brews here! If guzzling beer all day makes you tired (we’re it won’t), you can indulge in some fun activities and games too. It’s certainly a day well spent!
Location: Festival Plaza Drive, Las Vegas, Nevada
Dates: November every year

Further Read: Shopping In Las Vegas: 10 Best Places To Shop Like Never Before

10 Things To Do In Orlando That Define Extravaganza