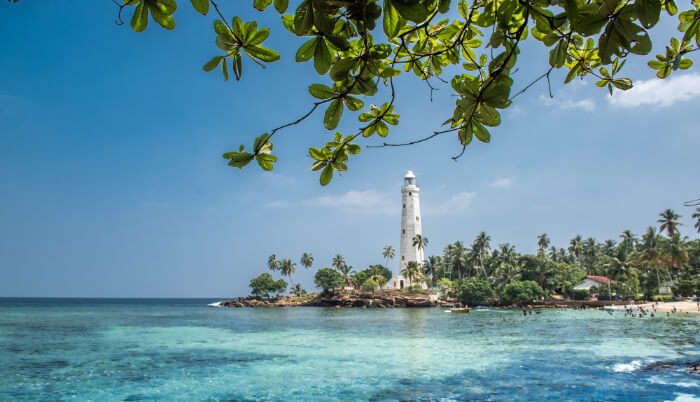 A picturesque city in the southwest coast of Sri Lanka, Galle is a gem in this island country. Most famous for the Galle Fort, a spectacular structure built by the Dutch in the 16th century, Galle is now a UNESCO World Heritage Site. Located just 119 kms away from Colombo, Galle is easily accessible from major parts of the city. The geographical location, unique architectural style and a host of quirky shops & restaurants make Galle an idyllic getaway, especially during the monsoon. Therefore, take a trip to Galle in August and explore its untarnished beauty at length.

Galle, located in the southwest coast of Colombo, enjoys a tropical rainforest climate. The city does not experience any dry season as such, but January and February may be considered as comparatively dry months. Due to its tropical climate, the temperature does not vary largely during a year and the average temperature remains around 26 degrees celsius. During the month of August, the temperature goes down to 24.8°C, while the average rainfall is recorded at 187mm. The sky looks magical after the fresh showers and the sun shows up during early afternoon. It is advisable to pack umbrellas and raincoat while visiting Galle during this time.

Best Places To Visit In Galle In August

While there a number of amazing places to visit in Galle, some of the places are best enjoyed only during monsoon. Check out our curated list of these top places to visit.

One of the most striking attractions of Galle, the Galle Dutch Fort was built by the Portugese many years ago. It was constructed on a large piece of land and was used by the Portugese until the Dutch took over. Later, after rebuilding it, the British sealed the fort as their own. The Fort features a monumental structure built with unique blends of architectural styles. A UNESCO World Heritage Site at present, the Galle Dutch Fort should be the must-visit place on your list.

Must Read: 10 Places To Visit In Nuwara Eliya In 2021: The Mini London Of Sri Lanka!

2. The National Museum of Galle

A treat to all the history enthusiasts out there, the National Museum of Galle offers you a window to the glorious past of Sri Lanka. One of the famous touristy places in Galle, the Museum showcases an array of architectural designs, relics and other archaeological objects. These objects can be traced back to as early as the 4th century. You will also find the influence of Dutch in Sri Lanka represented through various weapons and vessels which are put to display here.

Suggested Read: 9 Things To Do In Ella That Will Take Your Sri Lanka Trip To The Next Level

Located close to the Galle Dutch Fort, the Galle Lighthouse is one of the beautiful attractions of Galle. It is a tall, captivating building which also happens to be the oldest towers in the country. You can feel the cool, fresh breeze of monsoon brushing off your skin when you are here. You can also see the far off oceans from the lighthouse, and take a moment to realize its importance for mariners.

Suggested Read: The Complete Guide To Applying For A Sri Lanka Visa For Indians

If you are looking for a peaceful retreat in Galle during August, Japanese Peace Pagoda is the place to be. Seated on top of the Rumassala Hill, the Pagoda overlooks the vast ocean and dense forests spread across the country. During the daytime, feel the gentle monsoon breeze and during the evening, attend the daily ritual performed at 5.30p.m.

An offbeat destination in Galle, the Jungle Beach is a treasure trove of all the serene things that you are looking for. Located in close proximity to the Japanese Peace Pagoda, Jungle Beach can be easily covered on a single day tour of Galle. The Beach does not remain swarmed by tourists. Hence, you can expect a relaxing time here. You may either take a stroll along the shores or try snorkeling.

Fun Things To Do In Galle In August

If you think Galle is only about exploring museums and forts, think again! Because these exciting things to do in Galle will prove your point otherwise.

One of the most exciting things to do in Galle is surfing. The beaches of Galle are just perfect for beginners as well as professionals. There are a number of surfing schools located just close to the Galle beach. Do not forget to check out the weather forecast before hitting the beaches. A little help from locals might be useful if you are to try surfing on your own.

Best time: Early in the morning

SUP or Stand Up Paddle Boarding is a fun activity to try in Galle. The activity is performed on a board with one paddle provided for paddling. All you have to do is use alternate arms while paddling and balance like a pro! If you are already an expert at it, you might as well try yoga on the boards. Note that the activity incurs a risk if you do not know how to swim.

When in Galle, try fishing! It is so much fun to go out and catch a fish or two on your own, and cook it later for supper. Galle is quite popular for its ‘stick fishermen’, where the local fishermen use stilts and spearfish for a catch. Although visitors are not allowed to do that, you can still catch snapper along with a little guide from the locals. While you are fishing, you may also get to catch a glimpse of whale swimming.

Suggested Read: Dehiwala Zoo: A Pocket Guide To Have A Funtastic Experience On Your Next Sri Lankan Vacay

Galle beaches are considered as one of the best places for scuba diving because of the great visibility and affordability. There are an array of dive shops located around the beaches. Make sure to check their qualifications before buying any one. For beginners, you will be asked to try in shallow waters initially. Later on, you can get a hang out of it and do it for utter fun.

As Galle experiences tropical rainforest climate, you will easily find the place covered with large stretches of lush forests. Spot crocodiles, elephants and various species of birds during a tour of rainforests. Do not be startled if you come across pythons on your way. It is a common sight here. Make sure to use mosquito repellents while going on a rainforest tour.

Further Read: 11 Top Villas In Hikkaduwa To Enjoy In The Beachy Paradise Of Sri Lanka!

Galle is an open experience of Colombo’s varied landscape and architectural heritage. And it is best enjoyed by visiting those amazing places and trying out several fun activities. Additionally, there is a magical charm to the whole scenario when you plan a trip to Galle in August. It’s time to curate a travel itinerary already!

Sikkim In August Darjeeling In August South India In August

5 Interesting Cafes In Galle, Sri Lanka To Visit In 2021

3 Great Resorts In Galle, Sri Lanka For A Comfortable And Luxurious 2021 Stay