Viharamahadevi Park: A Handy Guide To Explore This Nature’s Paradise In Sri Lanka! 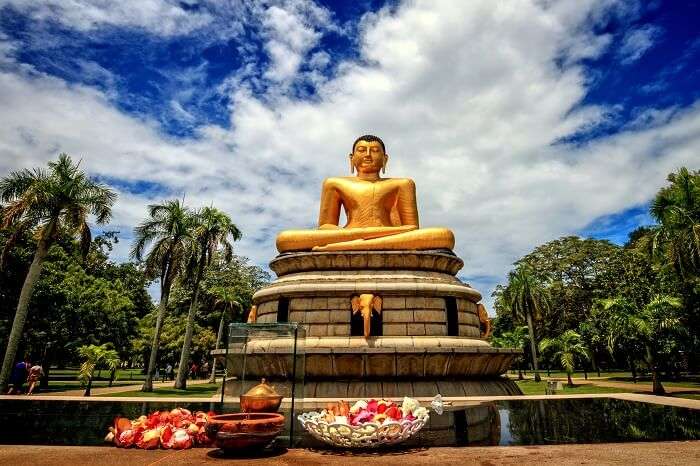 Commonly known as the ‘garden city of the east’, Colombo is the must visit place for the travellers visiting Sri Lanka. The city is not just a place sprawled with pristine beaches, but it also becomes the highlighted stopover for many other reasons. One of them being the home of ornamental gardens and magnificent temples.

Viharamahadevi Park is one of the gems of the Colombo city which is situated amidst the hustle-bustle. While in the city, take a brief tour of this lush-green park by keeping this guide handy.

The Viharamahadevi Park is the oldest and the biggest park in the port city of Colombo in Sri Lanka. Located near historical places such as the National Museum, Town Hall and the Colombo Public Library, after receiving recent renovations this place has become a central location in Colombo. Built in the reign of the British Colonial Government on land donated by Captain Charles Henry de Soysa, this park was named after Queen Victoria as the Victoria Park.

The park has a long history of being used for different purposes like during the World War II it hosted the British Army and the 17th Brigade of the Australian Army. It was also used as a cricket ground by the first class teams from 1927 to 1995 and even hosted a match between the touring English team in the 1930s. After World War II was over the park was restored and it took a bit of its current form.

After the Independence of the Island Nation of Sri Lanka from the British Rule, the park was given its current name, Viharamahadevi Park which is named after the Queen Viharamahadevi, the mother of King Dutugemunu. At the present day, the park features a gigantic statue of Buddha, a children’s playing area and a numerous water fountains.

With the passing time, the charm of the amusement started to fade. The amusement park beside the park, the lakes, the play area, the fountains were kept without proper maintenance and it became more or less understandable the park could no longer be the same central location in Colombo.

Things took a turn in 2013 when it was decided that the 23rd Commonwealth Heads of Government Meeting was to happen in Colombo. During this time the park was renovated and reconstructed to regain its speciality of being the central location of Colombo again.

Must Read: 6 Best Museums In Sri Lanka That’ll Walk You Through The Country’s Rich Historic Past

This place, just like the city of Colombo is a year-round destination and you can visit any time of the year due to its pleasant temperature which comes due to its proximity to Ocean. You should still avoid coming between the months of June and September because of the heavy rains that happen here during monsoon that could hamper your experience.
Also, the view of the sunset and sunrise by the lakeside in such a serene place is another unexplainable experience of its own.

How To Reach Viharamahadevi Park

The park is super easy to approach from anywhere in the city of Colombo. You can make use of the public bus services or hire the cool kangaroo cabs, ace cab or rent a traditional taxi. If you want the cheapest way, you can even reach the park on those tuk-tuk rickshaws.

Suggested Read: 6 Best Homestays In Sri Lanka To Relax, Revive, And Rejuvenate At One’s Own Pace

Best Places To Stay Near The Park

Though the park hasn’t got many things to watch, it is advised that you stay in Colombo more than a day and experience the whole of the city. Some of the best places to stay near the Viharamahadevi Park in central Colombo are Cinnamon Red Hotel, Backpack Lanka Hostel, Bunkyard Hostels, Cinnamon Grand Colombo, Renuka City Hotel and Juliana Hotel to name a few of the best.

The entry fee of Viharamahadevi Park is 20 LKR for adults which is very nominal and for children, there is some discount.

Suggested Read: Top 10 Things To Do In Kandy For Couples That Assure Ultimate Fun In Sri Lanka!

Interesting Things To Do Near Viharamahadevi Park

1. Scenic Tour of Colombo in an Airplane

Escape from the everyday monotony of your life, take a ride of an aeroplane and experience the scenic views of the city of Colombo from up above in the air. Enjoy these scenic views on a 20 minutes flight over land.

2. Tea and Herb Tour in Colombo

Built-in memory of those killed during the struggle of Independence of Sri Lanka, this is a must-visit destination for the tourists who come to Colombo. Completed in 1953, this premises has a museum and the Independence day celebrations of Sri Lanka.

Suggested Read: Kandy Shopping: 10 Best Places In The City That’ll Compel You To Stop And Shop!

Are you ready to escape into the serene surroundings of this park settled in the heart of the Colombo city? If yes, then plan ahead and book one of the customized Sri Lanka packages with TravelTriangle and don’t forget to mark this place a must visit in your travel list!