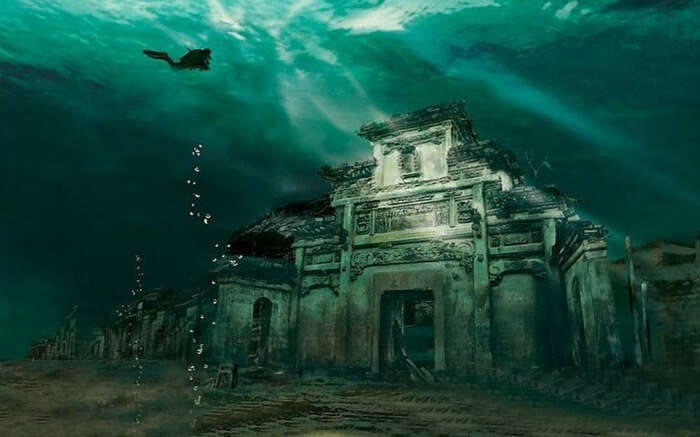 Yes, there’s a fascinating world under the water! Many brave hearts have dared to dive into the realms of the underwater and discover as well as create sites and landscapes that will leave all mortals being dumbfounded.

Take the plunge and discover a whole new world of underwater wonders that range from coral reefs to manmade cities, seabed sculptures, restaurants and shipwrecks. This treasure trove of both natural and manmade underwater wonders provides some incredible sights.

So put on your diving costumes and come explore these major underwater wonders of the world!

You can literally see dead people in the Neptune Memorial Reef in Miami, Florida where human remains have been used to create this artificial reef. People’s ashes were mixed with cement to create this reef. Filefish, trunkfish, sea urchins and various other kinds of marine animals have now made this reef their home.

Located more than 8,000 feet below the ocean’s surface, the deep-sea vents off the coast of Ecuador are a phenomenal sight. These extreme water and mineral combinations can sustain a number of species like blind crabs, brittle stars, pink vent fish, sea cucumbers, and sponges.

Considered as one of the best diving sites in the world, the Blue Corner Wall in Palau is a sight for sore eyes. Multitudes of rich marine life including schools of pelagic fish, bright sea whips, rich coral reefs, flapping eagle rays, and darting reef sharks can be spotted swimming around. But be careful as the currents are quite strong here so make sure you explore the area with experienced divers.

Transparent water, snow-white like plaster walls, stalactite halls, and deep vaults greet you as enter Russia’s largest cave. There is an abundance of gypsum in this 5 km long cave where one tunnel leads to another. There is also a legend surrounding this underwater wonder of the world where the magical and surreal Lady of the Cave is said to reside in the cave and protect it from any danger.

Dive into the deep waters of Cabo, Mexico and witness the unique phenomenon of sand waterfalls. Strong currents force coastal shelves to spill sand like waterfalls into a 120 m abyss. You can also spot octopus, reef sharks and barracudas swimming along in this abyss.

Explore the multi-colored vibrancy of the world’s largest coral reef that can be spotted from the earth’s orbit: the Great Barrier Reef. Underwater gardens and a multitude of marine life make up this incredible Heritage Sight. This reef is also considered as one of the seven natural wonders of the world.

Over 500 species of fish and 106 coral species can be seen in the stunning Belize Barrier Reef in the West Indies. Over 90 per cent of this reef is yet to be discovered paving the way for a number of new species. It is truly one of the greatest places where you can experience marine life at its best!

8. Green Lake (Austria)- The park that disappears under water

This is one of the most phenomenal wonders of the underwater world where the surrounding park goes underwater during summer. The ice and snow from the surrounding Hochschwab mountains in Austria melt and convert the park into a lake. Scuba divers can plunge in and explore the green foliage underneath that is also replete with benches, trees, and plants.

9. Jellyfish Lake, Palau- A jellyfish explosion in an isolated lake

Imagine thousands of harmless jellyfish swimming past you in an isolated lake! At Jellyfish lake off the coast of Koror in Palau, you can even pet these jellyfish whose stingers are too small to harm humans. Just avoid the layer of hydrogen sulfide that lies 15-20 m deep in this natural underwater wonder.

Declared as a UNESCO World Heritage Site in 1996, Lake Baikal is the largest and deepest freshwater lake in the world. This sea wonder of the world expands about 2 cm every year and contains over 1,550 species of animals and 1,085 species of plants. You can spot the Nerpa Baikal seal here that are a symbol of the region’s heritage.

11. The Northern Red Sea, between Asia and Africa- The underwater garden of Eden

As you enter the Northern Red Sea that lies between Asia and Africa, you will be surrounded by over 1000 invertebrates, 1000 kinds of fish and numerous coral reefs. The sea turns into a colorful plethora of orange and red in the sunlight and is truly a scuba diver’s paradise.

Cocos Island belongs to the Golden Triangle of Galapagos, Malpelo, and Cocos and is one of the best places for hardcore scuba diving. Many parts of this island were also featured in the movie “Jurassic Park”. There are over 20 different diving sites full of scalloped hammerhead sharks, silky, blacktip, tiger, guitar and silvertip sharks, whitetip reef sharks, marble, manta, eagle, and Mobula rays swirling around.

Dive into a circular shaft of salt-water that gets deeper and deeper and find yourself surrounded by friendly turtles, barracudas, snappers, jacks, tarpons, and tiny seahorses. Dean’s Blue Hole in Long Island is also the deepest blue hole that is a delight for any scuba diver.

Smoking pools of hot water laced by lava mountains mark the geothermal site of the hot springs in Hveravellir, Iceland. Located between the Hofsjokull and Langjokull glaciers, these geothermal wonders are warm throughout the year and are truly natural underwater wonders.

What lies beneath the sunken forest of Lake Kaindy is exactly what lies above. The trunks of spruce trees go all the way to the bottom of this lake that was formed after an earthquake in 1991. Clear mountain water and cold chilly weather dot this sunken forest in the Tian Shan Mountains.

Zhemchug Canyon in the Bering Sea is the biggest and deepest underwater canyon you will come across in the world. Lying 2.6 m deep and full of cold, oxygen-rich water, this underwater ravine is filled with marine life like the short-tailed albatross, the Northern Fur Seal, the snow crab and different types of whales.

Must Read: Wake-up With The Sharks At These 8 Almost Unreal Underwater Hotels In The World

Ancient Cities, Ruins, & other Manmade attractions under the sea

The Palace of Cleopatra was considered a myth but was finally discovered underwater by French archaeologist Franck Goddio in 2000. Lying off the shores of Alexandria this city was submerged around 1,200 years ago. Giant slabs of stones with Egyptian and Greek inscriptions, bronze statues, coins, ships – all dot the ocean floor and make The Palace of Cleopatra one of the greatest wonders of the underwater world.

Lion City was once known as the flourishing city of Shi Cheng that was built around 25-200 AD and consists of around 62 football fields in the area. This city now lies submerged in a lake between Five Lion Mountain at around 85-131 feet underwater. The city was intentionally flooded in 1959 to create a hydroelectric power station. Much of it still remains intact and is one of the most beautiful underwater wonders of the world.

Ancient villas, thermal baths, marble sculptures, and streets all line the ocean floor of the Bay of Naples. These memorabilia belong to the ancient city of Baiae which was once a major city in the Roman empire but also a land of corruptions and scandals. It was submerged due to violent volcanic eruptions over a course of 2000 years.

You can explore entire streets, tombs, and architecture of this submerged ancient Greek city of Pavlopetri. This town is the oldest archaeological underwater site in the world and dates back around 5,000 years ago.

Explore the once sinful and wicked city of Port Royal in Jamaica that was submerged under the ocean due to a massive earthquake in 1692. This city now lies 40 feet deep and contains many precious artefacts, many of which are still quite intact.

25. Underwater post office, Vanuatu – You’ve got mail under the ocean!

If you want a postcard from a unique destination, dive into the depths of the South Pacific Ocean in Vanuatu and send a mail. This post-office is 50 m deep and accepts special waterproof postcards that are available on the shore.

Go snorkeling in the deep shores off the coast of Japan and you will come across the Yonaguni-Jima pyramids. These phenomenal structures rise 250 feet from the seafloor and are among exceptionally beautiful wonders of the underwater world.

Dwarka was considered as one of the oldest Indian cities and according to legend consisted of 70,000 palaces dedicated to Lord Krishna. The city flourished until his death and then sunk under the Gomti River. Many artefacts are slowly being recovered now breathing life into this ancient tale.

The Underwater Museum in Mexico is a great site to go snorkeling as there are over 470 statues to explore! These include the Man on Fire, Cross of the Bay, Thing Blue (Beetle Car), El Bacab, Anthropocene (VW Car), Silent Evolution (450 statues), The Promise and the Dream Collector. There are also plenty of fish and turtles swimming around the statue.

Beautiful sculptures line the bottom of the Caribbean Sea off the western coast of Grenada and is called the Molinere Underwater Sculpture Park. This wonder of the underwater world was created by British sculptor Jason deCaires Taylor to protect the reefs. The sculptures keep changing over time with silt shifts and corals growing in abundance on them.

30. Christ of the Abyss (Italy)- Say a little prayer underwater

Italian sculptor Guido Galletti created this brilliant underwater wonder of the world that is 10 meter under the surface and 2.5 meters in length. The original statue is located in the Mediterranean Sea.

Suggested Read: 50 Weird Yet Fascinating Places All Across the World

31. Ocean Atlas (Bahamas)- Bearing the weight of the ocean

Located deep in the waters off the coast of Nassau in the Bahamas, this 18-foot tall statue is the largest underwater sculpture in the world. Created by Jason deCaires Taylor, this statue depicts a girl bearing a heavy burden on her shoulders. Explore this phenomenal statue that is made of special pH neutral cement, and can help create new reefs.

Shipwrecks & other remains under the sea

Among the many wonders of the underwater world lies the Bronze Age Sewn Boat of Croatia that dates right back to 1200 BC. This 3,000-year-old relic was discovered in 2014 at the bottom of the Zambratija Cove and surprisingly much of it is still intact!

From epic ancient cities to artificial and natural reefs filled with colorful marine animals, underwater museums, and even a post office, there are plenty of underwater wonders of the world you can explore!

So get your diving gear on and plunge into the waters of these different regions and uncover a different world underwater! Start planning your international holiday now!

Further Read: 11 Mysterious Places Around The World You Will Not Believe Actually Exist

Thanks To India, Earth Is Now A Greener Place Than It Was In Last 20 Years

A Good Workout & A Luxury Trip, This New Fitness Cruise Will Gift You The Best Of Both!

10 Most Romantic Private Islands For Honeymoon In 2022

Fire And Ice Vacation Ideas: The Future Of Travel Is Here And You Ought To Know