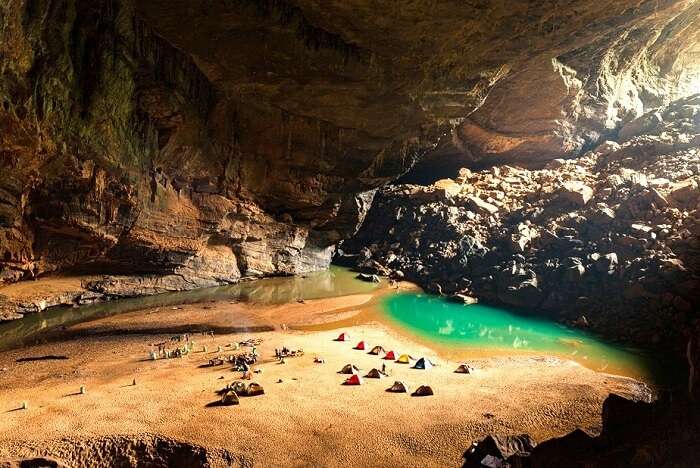 Hang Son Doong Cave in Vietnam is taken as one of the world’s largest caves. It is 5 times larger than the well-known Phong Nha Cave. This magnificent and amazing structure is the biggest chamber of Son Doong. This cave was created 2.5 million years ago. Tourists can camp near the Hand of Dog, which is a huge stalagmite. This looks like a dog’s paw, which attracts visitors to it! Centuries ago the roof of the cave collapsed, which created beautiful sections naturally which today are blanketed in lush greenery.

The Hang Son Doong Cave in Vietnam was found by a local man, named Hồ Khanh in the year 1991. The local people were prevented from entering the cave, due to the mix of the weird sounds like the whistling sound of wind. Also the roar was heard from the rushing stream in the cave. This is all heard through both the entrance and the steep descent. Some facts about the cave are as follows:

Must Read: Places To Visit In Da Nang: 10 Places To Put On Your Vietnamese Holiday Checklist

The Hang Son Doong cave tour is good from the month of February to August, which is the best time to travel Son Doong. The rest of the months are rainy, which is dangerous for the travelers. The weather from February to April in Son Doong is cool. This makes it perfectly suitable to discover the cave, as one does not get exhausted from the heat and the darkness inside the cave.

By Air: Saigon International is the main airport. Then a domestic airline such as Vietnam Airlines from Saigon to Dong Hoi can be taken.

By Train: One can have a quiet exciting experience through trains. Train from Hanoi to Dong Hoi, takes about 10 hours. But it is advisable to keep the Son Doong cave map handy!

By Road: The major city of Hanoi is connected well through buses. Some of the bus companies are Hung Thanh, and Hoang Long. These are comfortably suited for long journeys.

Things To Do At Hang Son Doong Cave

This amazing tour to the caves belongs to the finest and well-known Nam Long and Nam Long Plus hotels, which are perfect in organizing and collaborating with the best of the local tour companies. These altogether offer the best ways for one to enjoy the beautiful and the most amazing national park and its spectacular caves.

Suggested Read: New Year In Vietnam: 10 Experiences For A Lit Beginning Of 2021

You can enjoy a luxurious and comfortable stay near Hang Son Doong Cave, at the Hoa Binh Hotel, the Nam Long Plus Hotel and the Riverside Hotel. Budget accommodation can be availed at nominal rates, at the Geminai Hotel & Cafe, Tuong Minh Hotel, and the Ngoc Bao Hotel.

Enticed yet? Book your trip to Vietnam soon as the price of Hang Son Doong cave tour is pretty moderate. Other than mesmerizing on the beauty of Son Doong cave tour 2021, there are many things you can do nearby the caves. But travel during the month of February to August to avoid the scorching heat and enjoy the caves at their best!

Tuần Châu Island: The Only Guide You’ll Ever Need To Explore This Magical Island In Vietnam

10 Things To Do In Hanoi: How A Trip Becomes An Unforgettable Experience?

Snorkelling In Vietnam: Witness The Enchanting Underwater Life At Its Best In These Spots!

Your Guide To Scuba Diving In Vietnam: Find The Best Spots, Ideal Time, And Much More