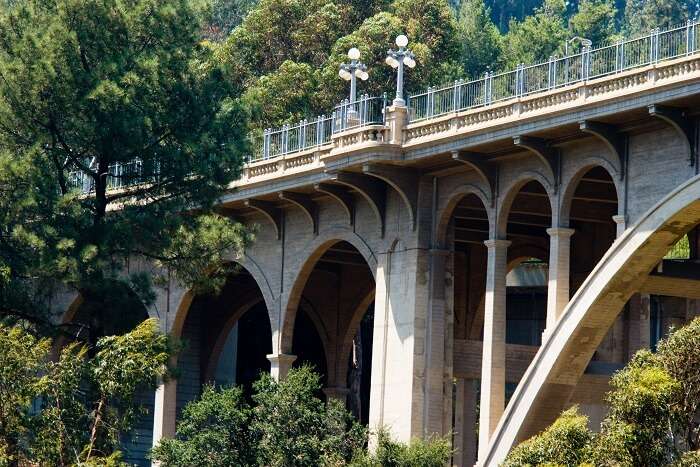 The city of Los Angeles is known to be the heart of Hollywood. The star-studded Hollywood Walk of Fame, the signature Hollywood Sign, and the Universal Studios is just a warm welcome to those wishing to get a taste of the life of the rich and famous. However, glitz and glamour are not the only things that find a home here. A little-known fact is that the City of Angels is also a host to ghosts, ghouls, and demons. We’ve shortlisted 6 haunted places in Los Angeles.

So here’s a list of 6 haunted places in Los Angeles that will pass a few chills down your spine. Check these out:

1. The Municipal Pier at Santa Monica

Image Source
Constructed in 1876, the Santa Monica Municipal Pier continues to be one of the most intriguing haunted places in Los Angeles. This iconic location has been a widely popular tourist attraction for years. Visitors have often talked about a dark and shadowy entity that haunts the roof at nights. It may also be seen taking a ride on the carousel horses. The news of this figure has spread so widely that it almost bears the status of an urban legend. The carousel along the pier once housed well-preserved wooden horse figurines and a Wurlitzer organ that produced the calliope music.Eventually, the carousel and nearby offices were replaced by a residential complex where the LA elites stayed. Once their parties died down, stomping of feet could still be heard even when nobody was around. Residents often reported hearing ghastly sounds. On other times, they would be witness to the haunting tune of the calliope music. These apartments were then reduced to ashes in 1975 due to a fire and were remodelled as Government offices.

The Sunset Strip is a narrow area on the Sunset Boulevard that connects Beverly Hills to West Hollywood. Back in the late 1800s, this area did not come under the jurisdiction of the LAPD, transforming it into Vice City. It was home to illicit transactions, brothels, casinos, strip clubs, and nightclubs that carried out shady activities. In 1940, the restaurant/club that prominently shone out was Ciro’s. It was the hub where Hollywood’s rich and famous dropped in to party. The place was also a centre for operations of mafias and gangsters, the most famous amongst these being Mickey Cohen. Cohen was also known as the King of the sun set strip. The basement of Ciro’s witnessed unspeakable horrors and torture carried out during the mob wars of 1947 to assert dominance over this land. With such a gory history, it would only make sense for this place to end up becoming one of the most ghostly places in Los Angeles. Presently, the Comedy Store, the birth ground of some of the famous comedians, stands on the very foundations of Ciro’s. Once the stand up performances are over and night falls, the ghosts put on a show. The commonly seen apparition is that of a World War II Army veteran wearing a bomber jacket. He is normally seen hiding or crouching in the kitchen and the upstairs office of the Comedy Store. Another well-known apparition seems to be ‘Gus’ who appears to be a hitman and can be found in the main room. Visitors and employees have both reported hearing terrified screams, animalistic snarling, and even moaning emanating from the empty basement. In addition to the noises, invisible forces are said to be pushing against the basement padlocks, chairs have been dislocated by supernatural entities, ashtrays were seen levitating before getting smashed against the wall – and this is just the beginning!

Image Source
Inaugurated on 4th June 1930, the Pantages Theater was a testament to Hollywood at its peak magnificence. Even after all the years, the location continues to be one of the most gorgeous theatres of all times. However, beauty does not bear immunity to the supernatural. In 1949, the multi-millionaire Howard Hughes took ownership of the RKO Studios, which also landed him the Pantages Theater. So stunned was he by the sheer beauty of the Pantages Theater that he set up his office on the second floor. The workaholic was often seen in the balcony, where he would take breaks thinking in the dark – the same spot where he has been sighted even to this day. The apparition of young Hughes is also seen walking around the theatre, especially in the executive offices. In addition to Hughes’ spirit, a young woman, who died in 1932, also seems to be haunting the Pantages Theater. Legend has it that the aspiring opera singer was spectating the show on the mezzanine floor when her life was tragically cut short. Disembodied voices of the woman can be heard singing in the auditorium when it is dark and quiet. It appears that the spirit has overcome her shyness and commenced giving performances at the Pantages Theater. Even though the stage is empty, discernible voices have been picked up by the stage microphones during the taping of live performances.

Speaking of haunted places in Los Angeles, USA celebrity hauntings is a real phenomenon here. Hollywood heartthrob Marilyn Monroe lived at Hollywood Roosevelt Hotel during the initial years of her flourishing career. Apparently, Monroe hasn’t been able to give up her poolside Suite 1200 even to this day. A full sized mirror that was once a constant fixture in Monroe’s room was moved to the lobby after her untimely demise. Visitors who would click a photograph in the famous mirror would get a glimpse of Monroe’s reflection hovering around them. Sometimes she would be seen applying lipstick and on other times she is seen primping and setting her hair. Due to the thriving popularity of the ‘haunted mirror’ hotel officials had to move it out of the lobby. Another celebrity ghost that bears a strong presence at the hotel is Montgomery Clift. The star lived in the suite number 928 for a considerably long period of 3 months during the shooting of ‘From Here to Eternity.’ Guests putting up in the rooms near suite 928 have complained about someone practising the bugle, as Clift would often do in preparation of his role. Unsurprisingly, the suite would be vacant! In addition to the A-listers, there are other activities that have been reported at the Hollywood Roosevelt Hotel. Guests have seen random children running around and playing in the corridors, a pianist wearing dated clothing and shoes and playing the tunes at the mezzanine, and hotel guests who are seen enjoying a swim even after pool hours.

Image Source
Queen Mary is much more than a hotel that hosts the spooky “Dark Harbor” event around Halloween. Thriving on a long and eventful history, Queen Mary emerges as one of the most haunted places in Los Angeles. She started her journey as a luxury cruise liner that ferried big names like Winston Churchill and Bob Hope to Southampton in England. With the advent of World War II, she was drafted to carry troops to the battlefield. Stripped off her aesthetics, the ship was renamed as ‘Grey Ghost’ and painted into a grey camouflage. In 1967, the Queen sold her off to a tour operator who transformed her into a floating hotel at the Long Beach. Many sightings have been reported by the visitors on the ship, the most prominent amongst these being the Engine Room #13. In fact, the door of #13 has even crushed some unsuspecting victims to their death! Women in 1930s swimsuits were seen relaxing in the decks of the first class swimming pool. As per the legend, a young girl who is said to have drowned continues to haunt the second class swimming pool. Even the Queen’s Salon is a residence for a wandering young woman who is dressed in an evening dress. In addition to the sightings, strange activities like the ringing of telephones, running of water, and flickering lights have also been observed.

Image Source
When one thinks of haunted places in Los Angeles, it shouldn’t be surprising that a movie location shows up on the list. So don’t be fooled by the beauty of this location, it much more sinister than the stunning backdrop of La La Land. The Colorado Street Bridge has been monikered as the ‘Suicide Bridge’ and for good reason. Six years after the completion of the bridge, it witnessed its first suicide victim in 1919. This incident simply led to a chain of suicides all taking place at this venue. There have been over 100 documented cases of suicide taking place on this bridge and these are just the official numbers. Quite obviously, the real count would be much higher with the number still climbing! The issue became so grave that fences had to be constructed along the bridge to discourage the suicides. However, it hasn’t borne much of an effect. Naturally, a hotspot for suicide is also an epicentre of unfulfilled wishes and thus, hauntings. Many people have seemingly witnessed a man jumping off the rails. Those who could muster up the courage to extend to him have never been able to find him or his body. On the other hand, those driving in these precincts have had narrow-misses with a lady crossing the bridge, who vanishes at the last minute! The lights in the underpass tend to go off as visitors progress through the path until there is absolute darkness. Spooky!

Supernatural sightings and occurrences are so common in Los Angeles that the city has its own Ghost Hunters of Urban Los Angeles. Book a ticket to USA and visit these 6 haunted places in Los Angeles if you dare. We challenge you!