Top 10 Haunted Places In Tokyo That Will Scare The Daylights Out Of You! 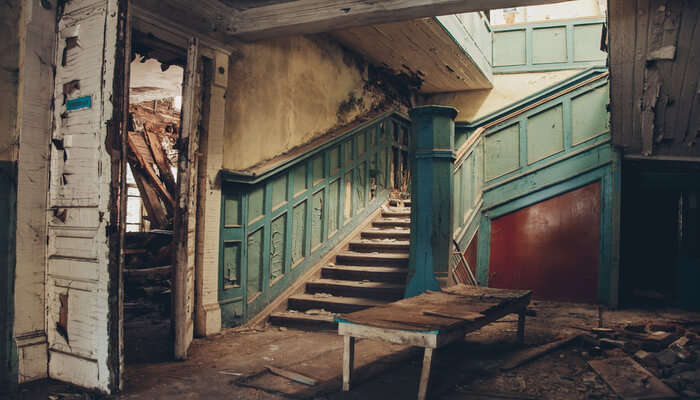 Now the capital of Japan, Tokyo is a prefecture that is visited by a number of travelers every year. Famous for its cherry blossoms, shopping districts, cheap electronics, gleaming castles, and traditional culture, Tokyo also houses some of the eeriest places which might send a tingling sensation down your spine. Japan is a peaceful place to live in but paranormal activities have not spared this prefecture. So, if you want to spook yourself out, then head to these top haunted places in Tokyo. But remember to take a companion with you while visiting these scariest places in Tokyo.

Note down the list of haunted locations in Tokyo which will send a chill to your bones. If you are a scaredy cat then these places are not meant for you.

Located in the heart of Tokyo, Toyama Park is one of the most haunted places in Japan. During the daylight, the park is lively and full of families and friends who visit this park for a picnic. But at night, no one dares to even think of stepping in this park. People who have visited this park at night have encountered some grisly scenes and heard shrills of people at the park’s hill, Hakone Yama.

Must Read: A Handbook Of 10 Tokyo Travel Tips For A Butter-Smooth Japanese Escape!

Also known as Oiwa Inari Tamiya Jinja, this shrine was the home of a woman. It is believed that this woman was poisoned by her husband but she came back as a ghost to avenge her death. This story is based on one of the most popular ghost stories of Japan, Yotsuya Kaidan. People living nearby either try to stay away from the shrine and if it is necessary to go then pay their respects first to protect themselves from the wrath of Oiwa.

Suggested Read: 6 Magnificent Tokyo Castles Sitting In & Around The City, Exhibiting The History Of Japan Perfectly!

In 1989, a cannibal, as well as a serial killer, murdered a girl and left his mutilated body near the Komine Tunnel. A chill of terror ran through the whole nation after encountering this incident. The tunnel was then not frequently used by people. The government opened a new tunnel in 2006 and the old tunnel became a haunted place. People have witnessed the ghost of that girl and thus, no one now dares to go near the Komine Tunnel.

Suggested Read: These Top Places For Shopping In Tokyo Will Not Burn A Hole In Your Pocket!

In 1963, the Doryodo Temple witnessed its first murder when an 81-year-old woman got robbed and then killed in the temple. The temple closed after this incident and people stayed away from this temple. Later in 1973, the body of a missing college student was found near the temple. Her professor killed her and then murdered his own wife and children before committing suicide. In 1983, an arsonist lit fire to the dilapidated temple exactly after ten years. To avoid any mishaps, nobody dared to visit this place again.

Suggested Read: If You Are An Adventure Junkie Then These 5 Tokyo Theme Parks Are Where You Should Be!

Himuro Mansion in Japan is popular around the globe for the infamous Himuro family murder. The family which owned this mansion used to practice occult but the ritual got tainted when a lover saved his lady from being sacrificed. This made the master kill himself after killing every family member. It is said their souls still linger in the mansion and try to entice people to complete their ritual. People living nearby have heard some eerie noises and screeching voices due to which they stay away from the Himuro Mansion.

Suggested Read: Day Trips From Tokyo: 7 Places To Fill Your Travel Diaries With In The Land Of Rising Sun

Once the tallest building in Asia, Sunshine 60 is a huge entertainment complex located in Ikebukuro. Seven criminals from the famous Japanese War were executed at this site. Not only this, many paranormal activities like strange apparitions occurred during the construction of this building. In the evening, people can spot strange fireballs floating around this mall which makes it one of the scariest places to visit in Tokyo.

Popular as the Hall of Repose, Ireido is the place where people took refuge during the Greta Kanto Earthquake which occurred in 1923. These refugees were burned to death at this place. Moreover, this site also served as a crematorium for around 38,000 bodies. Not only this, a Buddhist-style memorial hall was constructed in 1931 at this place to pacify the victims of the Second World War. People walking nearby have not only heard uncanny noises but also witnessed paranormal activities due to which Ireido has also been included in the list of haunted places in Tokyo.

Suggested Read: This Psychedelic Digital Art Museum In Tokyo Offers A Trippy Experience Like None Other

Another haunted place in Tokyo is Masakado’s Grave which is situated in the financial district of Tokyo. This is the resting place of Taira no Masakado, an angry samurai rebel from the Heian Period. His decollated head did not decay for nearly three months with its eyes rolling in the sockets. The head mysteriously catapulted from Kyoto to Tokyo making this site one of the spookiest places in Tokyo. If any worker disturbs the grave either risks accident or dies. Are you brave at heart to visit this grave?

One of the largest boneyards in Tokyo, Zoshigaya Cemetery is a place where people are unwilling to visit at any point of the day. Some people have claimed to witness faces and white hands appearing from the trees. Three people have committed suicide at this place and it is believed that their souls remain there and terrify lone wanderers. Owing to its history, Zoshigaya Cemetery is counted in the most haunted places in Tokyo.

According to the locals, Akasaka Mansion is considered as one of the famous haunted houses in Tokyo. Many people have witnessed paranormal activities like white smoke from the air conditioner and lights turning on and off on their own. In addition to this, a woman complained that someone dragged her in the room.

Further Read: 35 Best Places To Visit In Japan That Make It Look Right Out Of A Storybook In 2022

Like to watch horror movies? Do those eerie sounds excite you? If you said yes then you must visit these haunted places in Tokyo. The stories attached to these places will definitely make your blood run cold and a visit to any of these places after the darkest hour will make you believe in the paranormal activities. So, before planning your holiday to Tokyo, make sure to include the spookiest places in Tokyo. Dare to visit this place alone if you are not a faint-hearted person!

15 Haunted Places In New Zealand That’ll Give You Shivers

This Ghost Town In California Can Soon Become Your Next Holiday Spot. Would You Dare To Go?

5 Eerie Haunted Places In Nepal To Have An Encounter With The Mystical Side!