10 Magnificent Tokyo Castles That Exhibit The History Of Japan Perfectly! 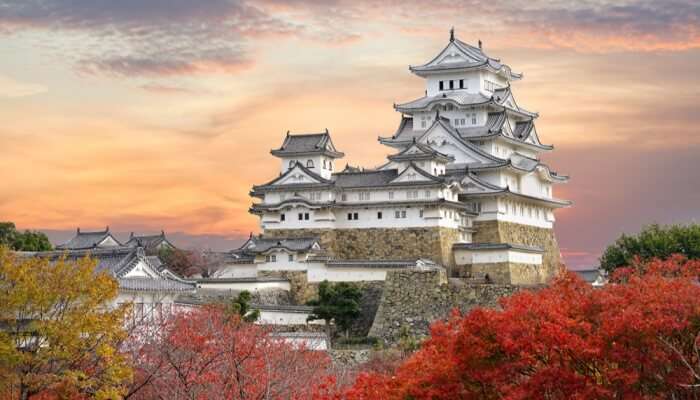 Exhibiting an enchanting amalgamation of cosmopolitan city and charming villages, the capital city of Japan, Tokyo, takes the breath away from the travelers. A city with an intriguing history and traditional culture, Tokyo is constantly coursing towards a bright future. While contemporary architecture, modern shopping streets, restaurants serving innovative and delectable dishes, and the mighty skyscrapers showcase the metropolitan and present-day city, Tokyo castles allow the travelers to take a trip to the ancient times of the capital. Unlike many other famous cities, castles in and around Tokyo entice the tourists by the offbeat Japanese architecture and battle histories.

Providing a magnificent juxtaposition of modern and conventional worlds, Tokyo offers a plethora of hidden experiences for the travelers of every taste. Warm-hearted, friendly, and lively city dwellers simply add to an already enthralling time. The marvelous authentic Japenese architecture and historic vibes of the castles in and around Tokyo are something that one should definitely experience once in their lifetime. Continue reading and go through the list of our handpicked castles that one should certainly add to their bucket list.

Top 10 Castles In And Around Tokyo

Showcasing an entrancing blend of ancient and new, Tokyo blankets wonderful experiences for the travelers. With contemporary sky-high scrapers representing the modern-day city and some of the best castles in and around Tokyo exhibiting the historic side, this metropolitan city of Japan leaves the spectators awestruck.

Surrounded by the captivating cherry blossoms, the most famous flora species of Japan, Hirosaki Castle was built in the 1600s on orders of the Tsugaru clan. Hirosaki Castle housed the first of the twelve castle towers. Although, when the lightning struck the castle just 15 years after it was constructed, this historic marvel was completely destroyed including the tower due to the fire that broke down. However, the castle was reconstructed two decades later and blankets a Hirosaki Park. The floors of this park are covered with enchanting cherry blossoms and the interesting watchtowers that have been named according to their directions.

Must Read: Day Trips From Tokyo: 7 Places To Fill Your Travel Diaries With In The Land Of Rising Sun

A samurai castle built on top of a hilltop, Himeji Castle acts as the epitome of traditional authentic architecture in Japan. Himeji is one of the Tokyo castles that has been added to the list of world heritage sites by UNESCO. The snowy white shades of the building make this marvelous structure enticing for the travelers. Built on orders of samurai warrior Akamatsu Norimura, this castle has never faced any form of destruction and is one of the well-preserved and beautiful castles in and around Tokyo. A velvety green lawn with beautiful pink cherry blossoms forms magnificent scenic views for the spectators.

The elegant and poise architecture with black walls and low ceilings, surrounding refreshing water body, stunning cherry blossoms, and the surreal backdrop of snow-clad mountains has landed Matsumoto Castle to the list of ‘National Treasures of Japan’. One of the Tokyo castles that were a major part of the warring period was Matsumoto Castle and allows the visitors to spectate the narrow windows, used by archers and gunmen during wars, offering mesmerizing views of the Japanese Alps, and the swans swimming in the moat below.

Tempting the travelers with its crimson colored exterior walls, Shuri Castle has seen a history of immense hardships. After being destroyed a couple of times due to wars and fire, the castle still stands strong and beautiful. Located on a hilltop, the castle allows the visitors to spectate some of the picturesque views over Naha, the capital city of Okinawa Prefecture. The bright colored architecture makes this castle standout amongst the rest of the Tokyo castles and entices flocks of tourists throughout the year.

Built on a man-made stone table, Osaka castle is one of the most popular Tokyo castles attracting a number of travelers. Surrounded by a refreshing moat, this castle was one of the largest castles during the 1500s, before getting destroyed in a massive fire due to lightning that struck the gunpowder keep. The building was reconstructed in 1931 and now features some of the modern elements like an elevator! The Osaka Castle Parl covers a couple of acres of land and allows the visitors to embrace the natural wonders or make use of the sports facilities available.

Suggested Read: 15 Unbeatably Fun Things To Do In Japan That All Travelers Must Try

Also known as the ‘black castle’ by virtue of its dark-colored exteriors, Matsue Castle houses the original framework that was built in the 1600s. The castle has never been touched by any form of destruction like earthquakes, fire, wars, and other forms. Sitting at a hilltop and surrounded by water, the castle houses a museum that displays arms and artifacts used in ancient times. The surrounding lush greens and narrow canals make the castle seem entrancing. Travelers are also allowed to ride a boat around the castle, on the moat and take in the beautiful views.

Suggested Read: This Psychedelic Digital Art Museum In Tokyo Offers A Trippy Experience Like None Other

Located on the Asahi River, Okayama Castle is named as ‘crow castle’ owing to the marvelous black exterior. Okayama Castle stands with Himeji Castle as its neighbor and the contrasting colors of black and white entice the travelers. Destroyed during World War II and reconstructed in the 1900s, the six-story-tall castle features the elements of its history, a pottery studio, and a small restaurant.

Suggested Read: 30 Best Places To Visit In Japan That Make It Look Right Out Of A Storybook In 2019!

Built in the 1600s, Nagoya Castle is located in the heart of Japan. The castle holds a very intriguing history and was contructed on orders of then military governer Imagawa Ujichika who gifted this castle to his son. This castle of Tokyo was heavily damaged during World War 2 during the air raids with the USA. This magnificent building was reconstructed in the 17th century and the extremely stunning architecture appeals to travelers.

Located in Shiga Prefecture, Hikone Castle is one of the Tokyo castles that is considered as the most important historic building in Japan. Sitting at the peak of a hill, the architecture of Hikone castle has survived during all these years. It is one of the originals castles in and around Tokyo. The unique architecture of Hikone castle combines varied different styles and designs, making it one of the attracting landmarks in the city.

With hues of white and gray covering the exterior walls, Shimabara Castle is a five-story structure housing Christian artifacts, castle remnants, weapons, and armors. The castle was built during the Edo Period, destroyed during the Meiji Period, and reconstructed during the 1900s. One of the turrets of this castle also houses an art museum that exhibits beautiful displays of the famous sculptor Kitamura Seribo. The displays include statues, models, and sketches made by the artist.

Further Read: 14 Places For Shopping In Japan That Will Make Your Shopping Experience Worth It!

The intriguing and rough history of the hardships of Tokyo castles is bound to blow the minds of spectators. Still standing tall and proud, castles of Tokyo have seen ample of unfavorable days but emerged as some of the magnificent marvels of the stunning country, Japan. These aesthetically appealing wonders of Tokyo have the capability to make the minds of visitors apparate to the ancient town. The beauty and uniqueness of these structures leave the spectators in awe. So, without any delay, plan a historic vacation to Japan and witness the exquisiteness of these castles by yourselves!

Kyoto In November 2020: A Detailed Guide For A Trip To The Land Of Cherry Blossoms

Japan’s Godzilla Theme Park To Open Soon In 2020 And It Doesn’t Get Better Than This!

Snorkeling In Japan: 13 Best Spots For Experiencing This Water Adventure In The Japanese Waters In 2020!

Tokyo Olympics 2020: Everything You Need To Know About The Event

Camping In Japan: 5 Super Gorgeous Spots For All Future Campers!

Japan In January 2020: Take A Trip To This Winter Wonderland