12 Super Hilarious City Names And How They Got Them! 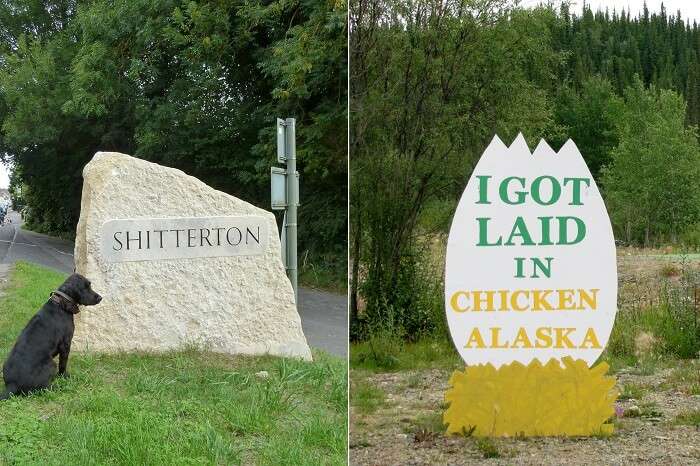 Every city name has a meaning. While some cities and towns are named after an important river, mountain, or even jungle, others are named after, say, a person who may have discovered or ruled it long ago. Whatever be the name, there’s always a rational explanation behind its nomenclature. But if that holds true, then how did the following cities fall upon such wacky and comical names? Believe it or not, there’s a reason for that too, no matter how bizarre it may sound.

Scroll down to see some of the funniest city names and how they got them that will make you go like “Whaaaaat???”

See These Hilarious City Names And The Stories Behind Them

If you think it’s a coincidence, you’re hell mistaken.

One of the theories behind Shitterton’s origin says that it’s “the village on the stream that is used as an open sewer”, thus, the name. Who knows how true it is! This small hamlet in Dorset, England, never fails to draw the attention of passersby. So much so that travelers kept stealing the Shitterton road sign, again and again, to keep as a souvenir, and the villagers had to get one made out of marble in the end.

We know what you’re thinking. But no, you won’t find Batman here. This small village in Nottinghamshire, England, draws its name from the old English word for “goat home.”

The early miners that came here in search of gold kept themselves alive by eating ptarmigans that were abundant here. When the town was to be incorporated in 1902, people suggested the name “Ptarmigan”. However, since no one could agree on the correct spelling, they named it ‘Chicken’ to avoid embarrassing situations. Sure the town is mocked for it, but the villagers take it quite well, as is evident from the picture!

The residents of Crapstone say the name means “the “place of the rocks“ or ”something to do with the soil” when it might mean neither. But these innocent fellows can’t be blamed for not knowing. Crapstone is one out of those many terms in the English language that have changed over the centuries, words that either didn’t exist earlier or didn’t have such eyebrow-raising meanings.

Hold your horses. Toad Suck in Arkansas (US) got its name either from the layabouts who hung out in local taverns where they “sucked on the bottle until they swelled up like toads”, or it’s simply a distortion of the French phrase meaning ”a narrow channel in the river.”

On the contrary, the city is actually very exciting. Located in Oregon (US), Boring was named after the Union soldier William Harrison Boring, the first person to settle here with his family in 1856. The town is paired with Dull in Scotland seeing the hilarious connection between the two.

When the Boring town isn’t boring, why would the village of Dull be dull? Located in the county of Perth and Kinross in Scotland, Dull derived its name from the word “field“ or ”meadow” in Pictish, which is now an extinct language.

This one has a pretty interesting story behind it! No Name is a place in Garfield County, United States, and is located near the No Name Creek and the No Name Canyon. They say that when the state sent questionnaires to find out the town’s name back then, most of the inhabitants wrote “No Name“ in the Name of Town section. But that’s not the funny part. The funny thing is that the state officially registered it into the state records and the city ended up with No Name (geddit?).

The name may send you rolling on the floor with laughter, but it is an ordinary term for the Danes, the people of Denmark where the town is located. First recorded in 1231 as Mæthælfar, the name of Middelfart means “the middle passage“ or ”the middle way.”

Don’t get your hopes up, people. This city in Pennsylvania is called ‘Intercourse’ (originally ‘Cross Keys’) because of the two famous roads that cross here – the Old King’s highway from Philadelphia to Pittsburgh that intersects the one from Wilmington to Erie in the middle. The joining of these two roads is referred to by the locals as ‘Intercourse’.

But then, are the people of this city called ‘Morons’? Well, let’s hope not! Morón de la Frontera is a Spanish town in the Seville province of Spain. The name has evolved over time, turning from ‘Almourol’, to ‘Maurorum’, to ‘Mawror’, and finally into ‘Morón’, which means “rocky terrain” and justifies the city’s topography.

Image Source
Don’t worry. You’re only as likely to get into an accident here as anywhere else in the world. The name goes back to the 1786 land survey when Brooke Beall and William Deakins Jr. were conducting separate surveys in this area in Maryland and Deakins claimed the land already surveyed by Beall “by accident”. Weirded out? So are we!

Wacky enough to tickle your funny bones? We’re sure they were! Do you know more cities with such funny names and a weird story behind it? Let us know in the comments below.