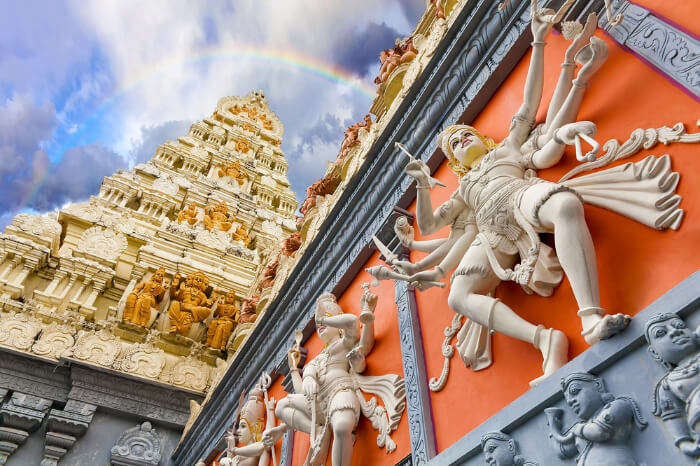 Apart from the scenic beauty, adventure sports and the presence of vibrant business centers, Singapore is also a home to the scores of temples. Indeed, one can witness the presence of Hindu temples in Singapore in almost all nook and corner of the island nation that make it truly possible tourist spot for the Indian Hindus willing to visit and worship in the temples while far from their own country. In order to connect to the people of India to its historic and cultural richness, the Hindu temples of Singapore keep organizing various Hindu festivals accompanied with music and dance concerts as religious events symbolizing total vibrancy and cultural amalgamation of Indian spirit to re-imposing Hindu faith away from home.

Approximately 10 percent population of Singapore comprises of aboriginal Indians and so are they majority Hinduism religion followers. Thus, it is obvious that being Hindus in Singapore, they would like to worship in the Hindu temples as well. It is perhaps the primary reason that this island nation houses several old recognizable Hindu temples. Besides Indian Hindus, large chunk of Nepal’s Hindu population too live in Singapore and visit temples there.

Majority Indian Hindus in Singapore are from South India therefore country’s olden temples reflect the typical Dravidian and Tamil stylish architecture. They include the presence of tall Gopurams, ornate carvings and vibrant colours of temples wherever they are. Interestingly though, vibrant and architecturally enriched Hindu temples in Singapore also welcome the visitors or tourists which are and aren’t Hindus. They welcome people of all faiths and religions who are keen to explore this nation. Here is a list of top 10 temples which you must include on your travel itinerary to Singapore visit. If you are a Hindu, you should also plan worshipping there. 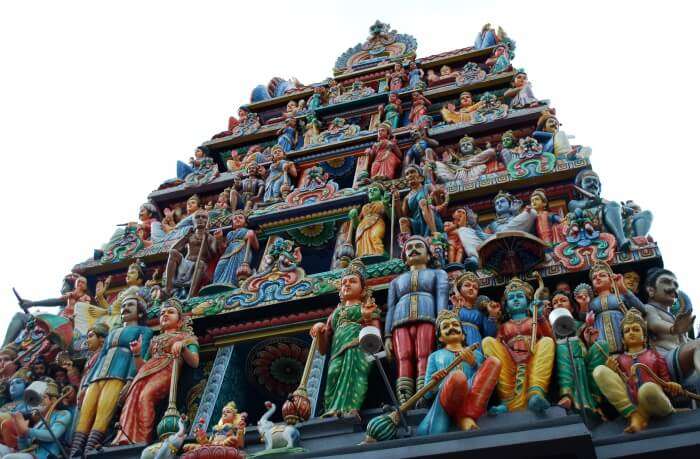 Built in the year 1827 by Naraina Pillai, Sri Mariamman Temple maintains its reputation and recognition as the 1st Hindu temple in Singapore. Located at 244 South Bridge Road, it is an agamic temple that had been built in the Dravidian styled architecture. With the abundant architectural and historical significance, this temple remains a major tourist attraction in Singapore irrespective of people’s faiths. The temple has already been listed among the National Monuments of the island country. It has been dedicated to the Goddess Mariamman, who is known for her power to cure severe and life threatening illnesses and diseases. Tourists from across the world visit this temple and wish to get saved from various chronic diseases. They have a firm belief that by worshiping here, they would be cured of the chronic illnesses.

Must Read: 14 Ethereal Festivals In Singapore That Will Force You To Ditch Yours In 2022 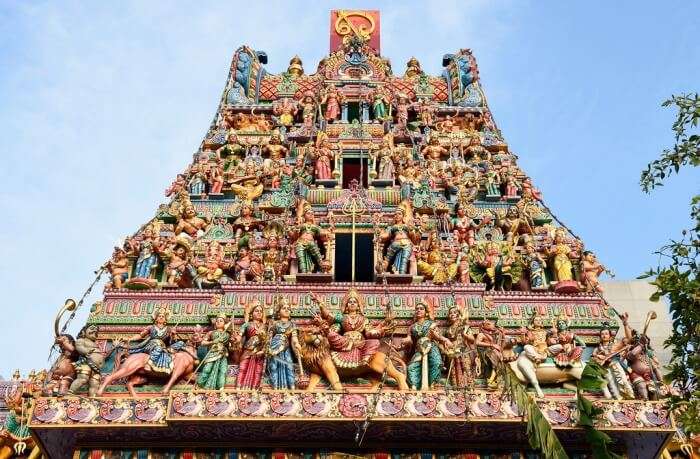 One of the oldest temples in Singapore, Sri Veeramakaliamman Temple had been built by the migrant Indians who came there to work, live in the city and finally settle there. This temple is dedicated to the Goddess Sri Veeramakaliamman or Kali, also known as the destroyer of evil. Due to unique architectural and historical significance of this temple, it remains the center of attraction and is considered one of the most spectacular tourist spots for the tourists and the believers of Hinduism. 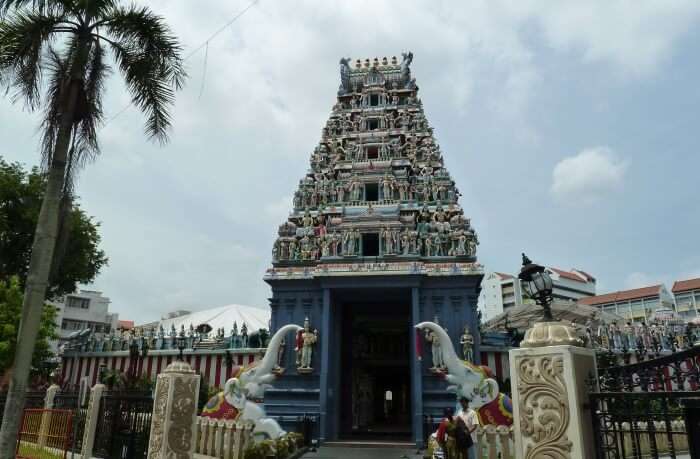 Built in the year 1885, Sri Srinivasa Perumal Temple is one of the oldest temples in Singapore. Having been built in the traditional South Indian style of architecture, this temple’s Gopuram is considered to be an incarnations of the Lord Vishnu. Inside the temple, visitors spot the scared deities of Perumal (Lord Vishnu), Goddesses Lakshmi, Andal and Lord Vishnu’s bird mount Garuda amongst others. It is rushed throughout the year as the followers of Lord Vishnu flock here with the customization of their Singapore trip plans to add this temple’s visit and special prayers in their itineraries.

Suggested Read: These Exhilarating Experiences On Sugi Island Will Make You Take A Detour From Singapore 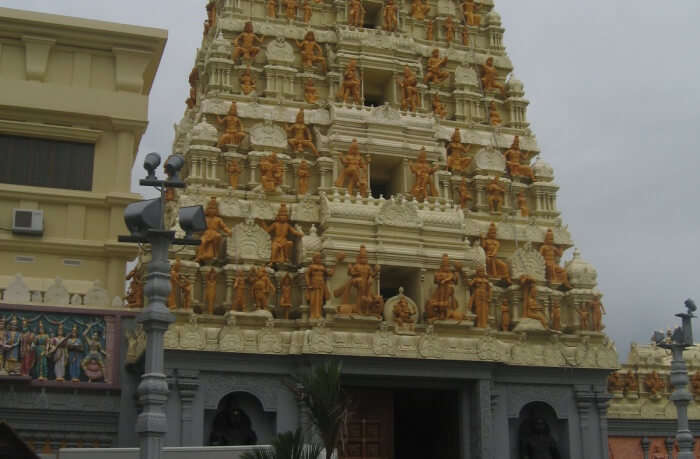 Suggested Read: 20 Romantic Places To Visit In Singapore For Honeymoon In 2022 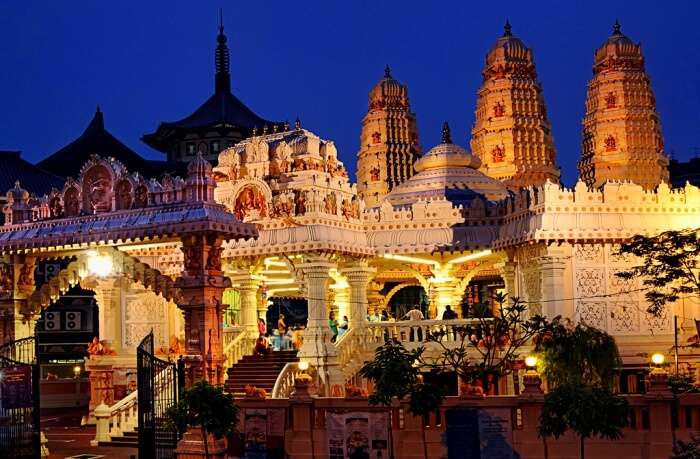 Rebuilt as a solid structure in the early 1850’s, the Sri Sivan Temple is an abode to the Sivalinga deity. This temple is well connected to all parts of Singapore through the road network, so it receives ample worshipper visitors throughout the year. Indeed, it has already turned into a modern scared place for the devotees to worship the Hindu God Shiva. It gets spiritual ecstasy during the Mahashivratri festival. This Indian festival is celebrated with ample zeal in Singapore to worship Lord Shiva. If you are looking for a spiritual tour to Singapore, it definitely remains a perfect place for you and your family to visit at least once.

Suggested Read: 16 Best Adventurous Activities in Singapore To Make You Scream In Thrill In 2022! 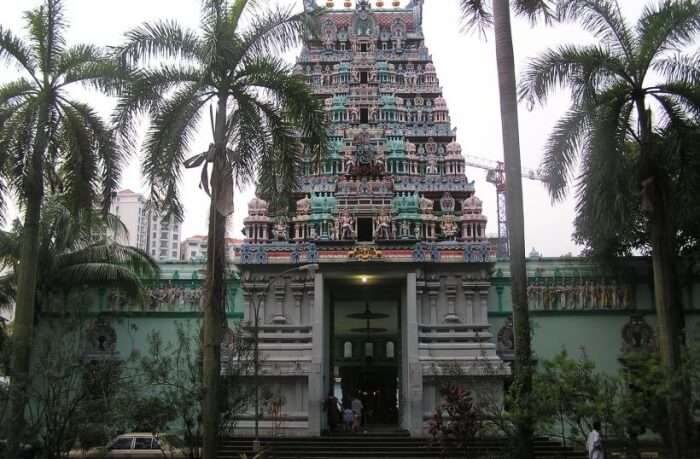 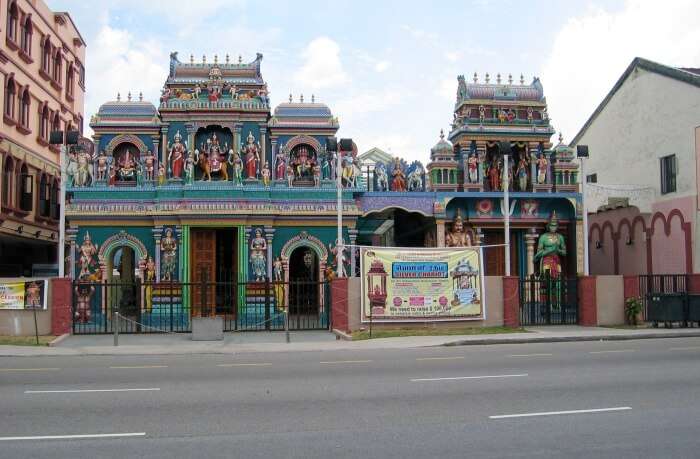 One of the oldest Hindu temples in Singapore, Sri Vairavimada Kaliamman Temple is visited by the devotee Hindus throughout the year. Although exact date of its construction isn’t known, since its inception though it has been attracting countless Hindu believers to visit for worship. Some records explain that it was built in 1860 but no authenticity of that claim is found yet. Hindus from Indian and all over the world especially Nepal and Sri Lanka keep visiting here for worship.

Suggested Read: Blast From The Past: 11 Spectacular Historical Places In Singapore 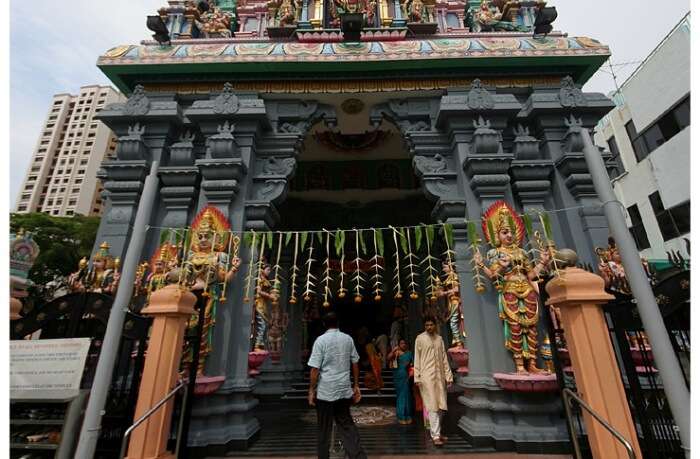 Sri Ruthra Kaliamman Temple in Singapore is dedicated to Goddess Kali. Located amid the scenic beauty, this temple used to be a tiny shrine earlier. The Indian Hindu community members took initiative to reconstruct it to turn into a huge building. It is today famous as a spot for multi-racial yet multi-religious Bhajan listening spot. Weekly classes are also conducted to educate people about the Human values that seek attention of people irrespective of their individual faiths. 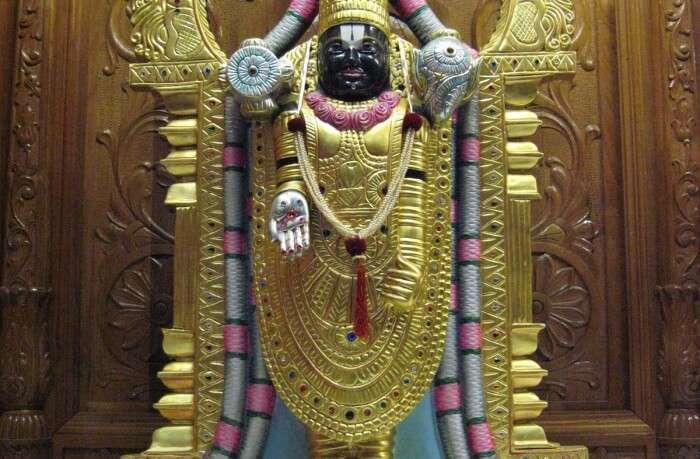 One of the popular Hindu temples in Singapore, Holy Tree Sri Balasubramaniar Temple is a famous landmark in the island country. It has been welcoming large chunk of devotees daily but receives huge rush during the annual ‘Panguni Uthiram’ festival celebrated with pomp and show. Other Hindu festivals are also celebrated here. Several devotees are also seen carrying milk on the pots on their heads to be offered to their god.

Further Read: New Year Celebration In Singapore 2022: Welcome The Next Year In The Lion City

Besides the above mentioned 9 famous temples in Singapore, there are many others that merit for visiting and discovering depending on your time, reachability and interests. Before clicking the pictures, read the guidelines and rules applicable. Make sure you remove your footwear and also ascertain not to wear inappropriate dresses before entering these sanctums to respect the sanctity of beautiful Hindu temples in Singapore that always seek people’s attention. So, plan a trip to Singapore soon and explore these beautiful symbols of art – architecture and faith.