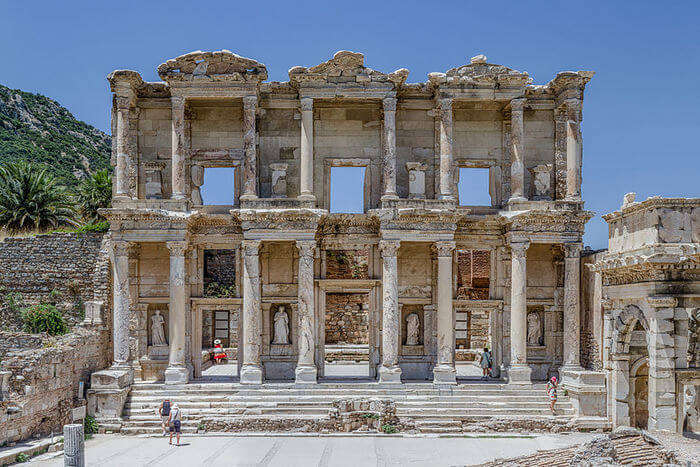 The land of historic significance, a nation with great cultural depths – Turkey, its charm is such that it attracts millions of tourists year after year. Visitors can’t have enough of this place. Turkey has so much to offer that a tourist might fall short of time to visit places, but Turkey will never get exhausted of places you must visit in whatever time you have.

So here we are with a list of 10 must-visit historical places in Turkey, making things easier for you when you are packing your bags with tickets to Turkey lying in it!

Built in the 10th century BC, this city flourished under the Roman Republic. It was established as a port and was an important commercial centre. Either take a taxi or rent a bike. Alternatively, take mini-buses — the cheapest way to travel.

Suggested Read: 20 Mouth-Watering Turkish Delicacies That Will Give Anyone An Instant Foodgasm!

Aizanoi, a city that has many relics of universal value, was one of the most important cities during the Roman rule. Its status as a commercial road network had gained utmost importance.

Must Visit: When in Aizanoi, do visit the Zeus Temple, the Complex of Stadium Theatre, the Macellum and the museum of Kutahya.

Suggested Read: Honeymoon In Istanbul: Let Your Hearts Meet Where The East Meets The West

There are many popular historical places in Antalya – the most famous being the Antalya museum. One of Turkey’s largest, it has 13 exhibition halls and an open air gallery. This museum highlights the history of the Mediterranean and Pamphylia regions. The magnificent display of artifacts makes the visit to this place worth every penny.

Aphrodisias, the city of the Aphrodite (the Goddess of love), is one of the most impressive historical sites in Turkey. Explore the ruins, tour the museum, and to do any justice to the beauty of this place you will need to spend at least 3 hours.

Tip: Avoid visiting during winters, the frequency of buses is quite thin in this weather.

Suggested Read: Tie The Knot Amidst The Blissful Ambience Of These 7 Wedding Venues In Turkey!

Side, an ancient Greek city, is home to many tourist spots which are both enjoyable and historically valuable. The temple of Apollo, the Aspendos, the Roman ruins, the Pamukkale bath, and the Duden falls are a few must visit places. Parasailing, rafting, scuba diving, and jeep safari are a few must do adventures while at Side.

Anadoluhisari, a fortress located in Istanbul, was built by the Ottoman Sultan between 1393 and 1394. One of the best historical places in Istanbul, it is also the oldest Turkish architectural structure built in Istanbul and was converted to a museum during the 1990’s. Although the inner museum is not open to public, the outer walls are still accessible and are worth a visit.

Suggested Read: 12 Places To Visit In Cappadocia In 2019 That Let You Explore The Magical Kingdom Of Anatolia

One of the most photogenic structures and most famous historical places in Turkey, the Blue Mosque is like a social complex. It features a mosque, a madrasa, Sultan Resting Mansion, Turkish bath, a fountain, a hospital, Mekteb-I Sıbyan, rental rooms, and homes. On a visit to this most famous tourist attraction, one must not forget to pay a visit to ‘Arasta’, which is at the back of the museum and is surrounded by Mosaic Museum with shops selling souvenirs.

Suggested Read: 10 Exotic Places For Photography In Turkey To Boost Up Your Instagram Game In 2019!

If you are planning to visit the best historical monuments in Turkey, it will be a shame if you miss the Alanya castle. Then a castle, now an open air museum, it offers picturesque view of the turquoise waters that flow alongside. This castle is surrounded by a four mile wall that features about 140 towers.

Tip: Don’t forget to shop in the tiny shops that boast of homemade knitting and sewing, and lamps!

Pilgrims, historians, architect enthusiasts, romantic couples, and even simple tourists, this place appeals to everyone. The exotic buildings and the sprawling gardens make a visit to this place a memorable one. You will need at least half a day to explore this place.

Tip: Carry a guide book or hire a local guide, but a guide is a must.

The youngest amongst the historical places in Turkey, the Anzac cove – a site of World War I – was the main base for the Australian and New Zealand Army Corps (ANZAC) for eight months during one of the campaigns of the war.

So with this digi-guide you can now plan your Turkey tour more peacefully! Keep wandering and let us know your favorite historical site in Turkey!

A. According to the reports by FCO, Istanbul, the largest city in Turkey and Ankara, the capital city is mostly safe for travelers. However, it is advised to be cautious before visiting any of the major cities in Turkey as there are chances of getting caught up in civil unrest and terror attacks.

Q. Which is the most popular historical building in Turkey?

A. Historical Blue Mosque is believed to be the most popular historical buildings in Turkey. Its enormous structure comprises 260 windows and 6 minarets.

Q. Which is the most beautiful place in Turkey?

A. There are numerous beautiful places to visit in Turkey and the following are the most popular amongst them:
1. Kabak Bay
2. Butterfly Valley
3. Patara
4. Princes’ Island
5. Cappadocia
6. Hagia Sofia
7. Mount Nemrut
8. The City of Ephesus

Q. Which is the oldest building in Turkey?

A. Gobekli Tepe is the oldest building in Turkey which was established nearly 12,000 years ago in the south-east Turkey. It is known as the world’s oldest temple and the first magnificent structure to be established by humans.

Q. Are there pyramids in Turkey?

A. Yes, Mount Nemrut in Kahta is a natural mountain of 2150 meters height and has a 50 meter artificial peak constructed on its top. This was commissioned as a tomb for King Antiochus I between 80 to 72 BC.

Q. How can I reach Topkapi Palace?

Q. Which is the oldest temple in the world?

A. Gobekli Tepe in Turkey is the oldest temple in the world.

Hang Gliding In Turkey: Two Best Spots To Fly In The Sky Like A Bird!

Turkey In December: Know Everything About This Country Before Packing Your Bags In 2020!

Nightlife In Istanbul 2020: 17 Best Experiences To See The Night Spreading Its Charm