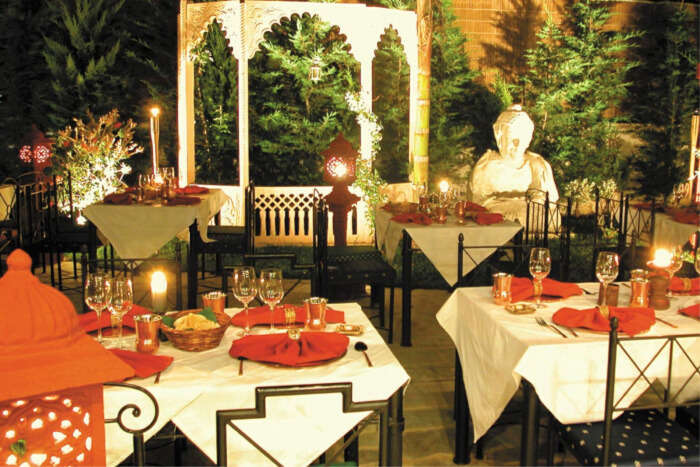 Santorini is a place known for its blue waters, white buildings architecture and some of the most beautiful views of the Aegean Sea. The Island is really popular among tourists and it is always bustling with a group of tourists. Home of to some of the best Greek and Mediterranean cuisine restaurants, it’s a place for food lovers. Though Santorini is not popular for its Indian food restaurants, more and more Indian Restaurants In Santorini have been popping up year after year.

So read along as we tell you about the famous places for tasting Indian cuisines while you’re holidaying there! Although not well known for serving Indian Cuisine, we have shortlisted some of the places which serve the best Indian Cuisine on the Island of Santorini.

Must Read: 15 Santorini Hotels With Terrific Views And Unmatched Hospitality

Although a classical Greek family restaurant established by a mother and a son in the year 1992, this place serves some of the best Indian Food on the Island. Known for its traditional Greek food, the restaurant also serves Indian Food on the side which has also become famous with its Indian Customers. Located next to the Central Orthodox Church in Fira Town the Capital of Santorini, this place is a must go for Indian Food lovers.

Suggested Read: Know Why Dana Villas In Santorini Needs To Be On Every Couple’s Bucket List!

Suggested Read: 15 Best Things To Do In Santorini For An Impeccable Island Holiday!

Vinsanto Restaurant located in the Kamari Beach area of the Island of Santorini serves some of the most authentic Greek as well as Indian Cuisine. Known internationally for its Greek Cuisine and known among Indians for its Indian Cuisine, this is a restaurant different people visit with a different purpose. Having been a hotspot for serving Greek and Mediterranean food, this restaurant is also a popular location that serves Indian food.

Suggested Read: 5 Most Romantic Places In Santorini That’ll Electrify Your Escape In 2022!

The Taj Mahal Bar is located in Perivolos just next to the beaches. With its vibrant Indian decorations, it’s a stylish place that is ideal for any meal from your morning coffee to your dinner. The atmosphere is unlike any other Restaurant on the Island with its Indian Decoration, mainstream music playing mixed with oriental tunes to match with the theme of the place. The menu here includes all types of drinks and spirits and delicious vegetarian as well as non-vegetarian food, this restaurant is more Indian than most on the Island.

Santorini is a popular island destination in Greece which has always been known for its rich intermixing of different cultures. While the Island isn’t specifically known for its Indian Cuisine, some places on it are well known for serving good Indian food to Indian Tourists. So, plan a trip to Santorini and try Indian dishes at some of the best places!

Christmas In Greece In 2022: A Guide For The Lovers Of Christmas Festivities!