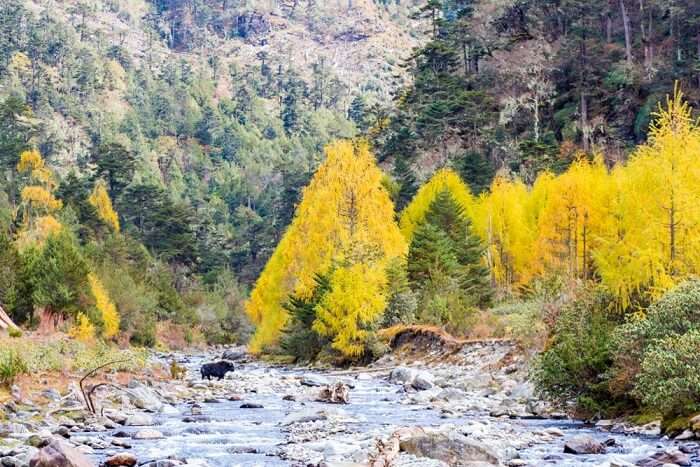 In today’s world where the human greed and passion to acquire the world has resulted in dangerous and horrifying results, the victims have been the environment as well as the animals. In such a world, the animals are not safe even in their natural habitat, they need extra protection if we need to maintain the life cycle and the food pyramid. Wildlife sanctuaries are one such solution to this problem as they provide protection to animal species from hunting, poaching, predation and many more torturous activities. In short, for animals’ wildlife sanctuaries are nothing less than a blessing. One such wildlife sanctuary is the Khaling Wildlife Sanctuary.

Located in the Samdrup Jongkhar District in Bhutan, Khaling Wildlife Sanctuary is one of the well-maintained sanctuaries available in Bhutan. Though, one of the smallest sanctuaries in Bhutan but the reserve is no less in terms of greenery or beauty. Occupying a minimal area of three hundred square kilometre, the Khaling Wildlife Sanctuary in Bhutan has an elevation range between 400 metres and 2,200 metres. As it is located in Southern Bhutan, the wildlife sanctuary shares the southern border with Assam and half of its territory with a wildlife sanctuary of the same name in Assam, India too. Though this wildlife sanctuary is the smallest natural protected area in Bhutan, but the reserve is fully occupied with lush greenery and natural beauty. The rivers flowing through it just add on to the physical beauty of the place. The wildlife sanctuary is surrounded by Assam on its eastern and southern sides, River Nyera Ama Chhu on the western side and Martshala and Shingkhar Lauri on the northern side. The altitude of this reserve varies from almost plain at around 150 metres to 1500 metres.

Being an extended part of the earlier known Neoli Wildlife Sanctuary, the Khaling Wildlife Sanctuary is also, known as the Khaling Neoli Wildlife Sanctuary, it is a home to the some of the rare wildlife species like Pygmy Hog, Hispid Hare and Elephants, Gaur and many other animals of the tropical wildlife. This beautiful wildlife sanctuary also acts as a home to some of the rarest avian species including chestnut – breasted partridge, rufous – necked hornbill and many others. With such rare bird species being spotted here, this wildlife sanctuary has even been marked as a major Bird Preservation site. The secret behind its lush greenery is the presence of evergreen forests, rainforests and subtropical forests as well as grasslands. With such a rich natural green cover this reserve surely looks like a place straight out of heaven. Apart from being one of the famous top – class habitat for wildlife, the Khaling Wildlife Sanctuary is also known as the site for bird conservation in Bhutan.

So, that you know a bit about the places to visit nearby if you plan to stay in the area for a bit long, we have made out a list for you. Have a look!

Sakteng Wildlife Sanctuary
Located in Trashigang District in Bhutan, this wildlife sanctuary is among the most protected areas in Bhutan. It has many endemic species of flora, that one might not find elsewhere. It also has the the Migoi, a species of the ape family that is endangered being protected here.

Orang National Park
This is located in the Darrang district of Assam. It has a variety of animals and plants that are being protected here. Among the animals, the most protected ones are the one-horned rhinoceros, that is endangered too.

Rupa- a scenic hill station
Located on the banks of Teanga River, Rupa is a serene hill station in Arunachal Pradesh. Though being a small hill station, this place is quite popular among tourists.

Bomdila- a picturesque, offbeat and a scenic hill station
Located around 18 kilometres away from Rupa, Bomidla is another popular hill station in Arunachal Pradesh. Known for its lush green hills, and the view of the Snow-capped Himalaya, tourists love this destination.

Nuranang Falls (also known as Jung Falls or Bong Bong Falls)- waterfall
Located in Tawang district, the Nuranang falls are 100 metres high and are simply pristine. This waterfall is known for it’s milky white water color and is quite a hub for tourists.

Tawang Monastery
Located in Tawand, Arunachal Pradesh, this Monastery is Asia’s second largest monastery. It is 3 stories high and has 65 residential building inside. There is a wall that surrounds the Monastery to ensure this place remains protected.

Umananda Temple
Umananda temple is located in the Peacock Island, in the Brahmapurta river. It is among the few places that are less explored in this region, but this place is gaining popularity. One can take a boat to the visit the temple that are available during the day-time.

Every person likes to go to a place which has something to peak their interests and is surrounded by some other places worth visiting. Khaling wildlife Sanctuary is one of the best places to visit in Bhutan for a wildlife and nature lover, thus contributing a lot in the country’s tourism. The only thing to keep in mind while visiting the place is to ensure proper peace and decorum, so as to not scare away the animals. Doing this will not only help you to see the wildlife clearly but will also enhance your tour.

Though it can be visited by a person on his own too by the help of maps and directions but we recommend you to either hire a guide or contact a tourism company. The reason behind this recommendation is that as a new person you will only see the things from the surface but travelling with a guide will help you get into the details and know the secret stories behind the things as well.

All of these places are located within a range of 26 to 53 kilometres from the Khaling Wildlife Sanctuary and are easily accessible. Totally mesmerising, with the scenic mountains in the background these places are worth visiting when going to visit the wildlife sanctuary. If you are a wildlife lover or a wanderlust soul then go ahead, Bhutan is waiting for you. So, plan your trip to Bhutan with TravelTriangle and experience the best of scenic views and lush greenery around to soothe your soul!

32 Hidden Places In Goa: Explore The Unexplored Side Of Goa In 2021

25 Best Places To Visit In Mcleodganj In 2021 That’ll Make You Fall In Love With This Gem!