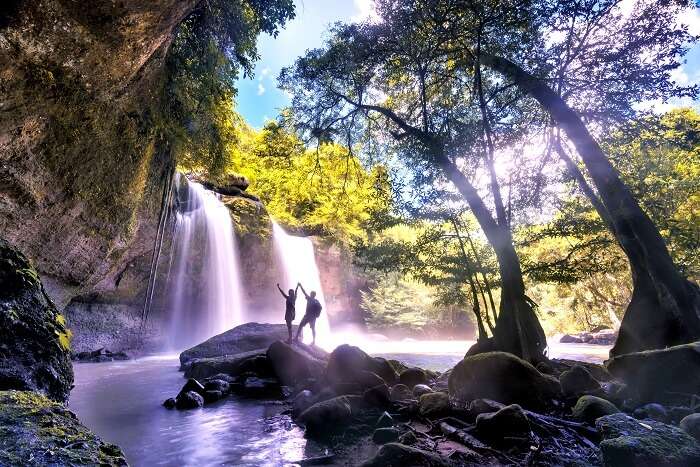 Khao yai national park is a Unesco world heritage site owing to it being the largest monsoon forested area in mainland Asia. The beauty of the park is surreal with paradisiacal waterfalls, riverside camping sites, and scenic trails to hike and trek. There is a variety of fauna and the Khao Yai National Park animals includes the elephant, macaque, barking deer, sambar deer, gibbon, porcupine, and civet.

Basic Facts About The Park

Reaching Khao Yai National Park from Bangkok is easy as there are private taxis, buses and minivans running till Pak Chong.

The nearest railway station is Pak Chong from where local transport can be hired.

This national park can be visited all year round but the best time to visit is in between November to April due to the favourable climatic conditions. March and April sees migration of birds, making it a haven for all the nature enthusiasts. The temperature is pleasant and the rains are not too heavy which makes exploring easy.

Here are the Khao Yai National Park attractions and activities:

This is the highest Khao Yai National Park waterfall. The beautiful cascade is the largest in the entire park and one can drive to the falls. Scooters can be hired to get around inside the place. The final distance to the falls is needed to be covered through a 1 km hike which is totally worth it.

Must Read: 9 Ayutthaya Temples That Are A Must-Visit To Experience The Best Of Thailand

Khao Yai National Park camping is an experience not to missed. The two major sites are Lam Takhong and Pha Kluay Mai. Lam Takhong is an open site while the Pha Kluaymai is hidden by jungles. Extending along a river, the site continues upto the cascades of Haew Suwat.

Suggested Read: 10 Tips For Backpacking In Thailand: A List Of Do’s & Don’ts

There are several trails from the main road which leads to the Nong Phak Chi Watchtower. The Khao Yai National Park trekking adventure is thrilling. One might encounter the whirlpool of flora and fauna thriving here. The trek is mainly through the grassland, making the Khao Yai National Park hiking easy and fun. One can spot various animals and birds on the way here.

Suggested Read: This Buddhist Temple In Thailand Is Made Of Beer Bottles, And It’s Not A Hoax!

A lot of hotels and guesthouses are available to stay at the boundary of the national park. There are a few bungalows too inside the park which one needs to book much in advance. If one wants to experience the complete wild affair in the park, then there are two campsites where tents can be set up. If you book a Khao Yai National Park tour package then your accommodation would be booked by the operator himself.

So when are you booking your trip to Thailand and experiencing the thrills of the Khao Yai National Park?

Q. Is there a option for Khao Yai National Park camping?

Q. What is Khao Yai National Park weather in december?

A. The region experiences a pleasant and cold weather during the time between November to February. Usually its sunny and the temperature remains between 21 degrees.

A. The greenery resort, the Focus Khao Yai are some of the hotels where one can stay while at Khao Yai National Park.

Q. Is there a option for Khao Yai National Park trekking?

A. The Khao Yai National Park is a very offbeat place in Bangkok which is preferred for trekking amidst the jungle and wildlife.

Ream National Park: A Guide To Get Closer To Nature Than Ever Before

Mountains In Thailand For Adventure Activities And Scenic Views In 2021

Shopping In Krabi: 10 Places To Stop By In This Lesser Known Paradise For Shopaholics