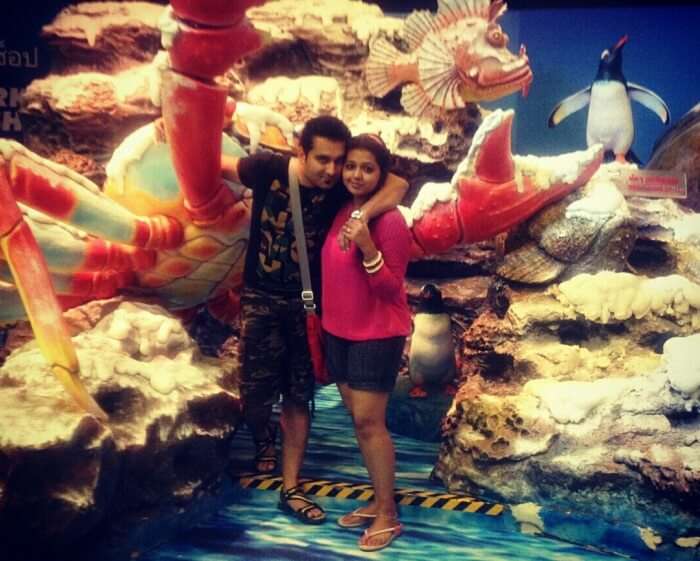 Just like every couple, we too were excited for our honeymoon. And to ensure everything goes well, I had made all arrangements way before the marriage date. My wife wished to go to Thailand and I had Bali and Indonesia in mind. So no brownie points in guessing why Thailand was chosen! I booked my seven nights and eight days Thailand honeymoon package from Travel Triangle, which was suggested to me by a friend. This led to the initial planning stage and I found the relevant information from their website. In no time after filling out the preferences and budget requirements, a travel representative contacted me and suggested a customizable honeymoon package in Thailand covering 3 cities – Bangkok, Phuket and Pattaya.

Just three days after tying our nuptial knots, we ventured on this beautiful journey and brought back the memories of a lifetime.

Day 1: The Beginning – Warm Thai Welcome and the Beautiful Phuket

We had a flight to Bangkok from IGI Airport, New Delhi at 12:15 am, which was delayed by half an hour due to fog. We landed at Suvarnabhumi Airport at around 4am in the morning and after the basic immigration formalities, we boarded our connecting flight to Phuket from the airport’s domestic terminal.

Although Thailand offers an on-arrival Visa to Indian tourists for 14 days, I insisted on getting the Visa in India itself. This turned out to be a smart move as our connecting flight to Phuket was just 1 hour 15 minutes from the landing time of our Bangkok flight and owing to the delay in departure, we might have missed it.

We landed at the Phuket airport at 6:30 in the morning. From there, we and 3 more couples were picked by the cab driver. The main city of Phuket is thirty kms from the airport and we were tired because of long flights. However, the tropical landscape and superb countryside on the way, rejuvenated us. In a little over one hour, we were dropped at our hotel – Hotel Baramee Hip, which was close to the famous Patong Beach.

As we were extremely tired, we ordered lunch and slept through the day. Later in the evening, we ventured out to explore the island

The first glimpses of the city were enough to guarantee that we were about to have a marvelous time there. We roamed around the Bangla Street, Walking Street and Patong Beach and thoroughly enjoyed the nightlife and carnival like celebrations. We had a buffet dinner at an Indian restaurant, which was included in the package.

Around midnight, after having a couple of drinks, it was time to return back to the hotel.

Must Read: 6 Exotic Places To Visit In Thailand For Your Honeymoon

Day 2: Soaking in the Phuket Sun

After a delightful breakfast, we boarded our pick-up vehicle around 8am for half day city tour.

Our tour guide, Jenny was very pleasant and we were taken to the most famous destinations in and around Phuket, starting with Khao Saam Haad or the 3 Beach Hill, Wat Chalong Temple, Sea Gypsy village, Cape Promthep, a huge Phuket arts and crafts showroom and the local distillery for cashew and fenny tasting.

After lunch at a local restaurant, we moved back to the resort for a swim and then left again for the Walking Street for shopping. We spent a romantic evening at the Patong beach and thoroughly enjoyed the scintillating nightlife of Phuket.

Suggested Read: 10 Exciting Things To Do In Phuket

Day 3: The Warm and Clear Waters of Phi Phi Island

Early next morning after breakfast, we were picked up by the driver and dropped at the Phuket harbor from where we boarded the already reserved ship to Phi Phi Island. The panoramic views of the vast sea, soothing sea breeze and crystal clear waters of Krabi and Phang Nga Bay conjured a magical spell on us.

Later after a swim in the Phang Nga Bay, we were treated to a splendid buffet lunch and then we were taken back to the harbor. The rest of the day was spent lazing around on the Walking Street and exploring the shopping arcades, groovy bars and exceptional pizzerias.

Suggested Read: 11 Remarkable Things To Do In Krabi: The Ultimate Bucket List

Planning your honeymoon in Thailand but confused about what to do? These Thailand honeymoon stories help you find your best honeymoon trip ever!

We had an early breakfast in the morning and were then driven to Phuket airport to catch the flight to Bangkok.

We arrived at Suvarnabhumi Airport at 1pm and after a long wait of three hours on the airport, finally our tour cab picked us. We contacted the agent and he apologized for the goof up. In order to make it up, we were sent a private vehicle and that too a Lexus GS. So I guess I couldn’t complain anymore.

In around three hours, we arrived in Pattaya. After checking-in to our hotel Bella Express, we headed to the beach.

Pattaya is a beautiful resort city where a gorgeous beach caresses the palm-laden road. It is a place where you tend to feel a surge in your hormones.

The beautiful crescent-shaped coastline is dotted with tanning beds and covered with silky sand to immediately put you into the holiday mode.

After spending an hour at the beach, we left for the rather infamous Walking Street. The thumping music, vibrant colors, neon lights and pretty damsels (I am not sure if all of them were really damsels!) welcomed us warmly.

Instead of watching an adult show, we preferred to stroll through the busy road and then took a tuk-tuk taxi back to the hotel.

We were picked from our hotel in the morning and then transferred through speedboat to a half day tour of Coral Island. En route, the ferry stopped for tourists for parasailing and under-sea walking excursions.

We opted for under-sea walking and yes, it was once in a lifetime experience.

Walking on the sea-bed and watching the mesmerizing sea life gives you a feeling that cannot be expressed in words.

After an hour under the sea, we were taken to the Coral Island where we went for a swim in the warm waters and then were transported back to the Beach.

The lunch was served in an Indian restaurant near the beach. Since we had whole evening to us, we decided to back to South Pattaya and Walking Street. We eased our senses by getting a Thai massage, checked a couple of quirky bars and then headed back to the hotel.

Since we customized our Thailand honeymoon itinerary, we opted out of the famous Alcazar Show in Pattaya. This is one thing that I believe we should not have missed.

We had a scrumptious breakfast of chhole poori and lassi in the hotel restaurant and after filling ourselves to the brim with the quintessential Indian food, we were driven to our new and last destination of the trip – the capital city.

We arrived in Bangkok around noon and immediately after check-in to Hotel Four Seasons, we were picked by the tour vehicle for a half day city tour. The sites that we covered included Wat Traimit or the Temple of Golden Buddha.

We decided to skip Wat Pho, the Temple of Reclining Buddha to go to the famous Indira market. After spending the day and emptying our wallets on gifts and souvenirs, we took the metro back to the hotel.

The Indian restaurant that was included in the package for dinner served extremely tasty Indian buffet and after dinner we spent the evening in the hotel bar where there were live performances with singers playing famous English rock anthems.

Suggested Read: Our Friends Trip To Thailand Turned Out To Be More Adventurous Than We Thought!

Day 7: The wild-side of Bangkok

We had opted for half day Bangkok Safari and Marine World tour and after breakfast, we were picked by our driver. This was our first Safari tour and we were looking forward to it.

The Marine World is kind of a zoo with a lot of shows included in the itinerary. These included orangutan, sea lion, dolphin and cowboy shows.
Safari Tour was an ok experience since we were not given an open jeep.

We were accommodated in a trailer and saw the animals from inside the vehicle. Major species that we saw in their natural habitat were Bengal tigers, zebras, giraffes, ostriches and rhinoceroses.

After spending the afternoon amongst wild animals, we boarded the vehicle that dropped us to Indira Market and spent the rest of the evening in Siam Underwater World. The magical underwater world is replete with amazing marine creatures and a lot of activities.

After thoroughly enjoying the experience, we decided to have dinner in the Siam Mall and then returned back to the hotel.

After a week of unmatched fun, great beaches, scrumptious food and boisterous night outs, it was finally time to say goodbye to Thailand, but with a promise to come back again. Our flight to Delhi was late in the night so we had another whole day to roam in the Thai Kingdom.

We checked-out, kept our luggage in the hotel cloak room, grabbed a taxi and went to the shopping street again to shop for anything that we might have missed.

Around 4pm in the evening, we returned back, called our agent and a cab was sent to drop us to Suvarnabhumi Airport. We boarded the flight at 9pm and landed in New Delhi at around 4am IST.

The honeymoon trip to Thailand was a mesmerizing experience. From pristine beaches, adventure activities, bustling nightlife scene to huge shopping arcades and rich & vibrant Thai culture, we explored as much as we could in these 7 days.

Further Read: Beyond Bangkok: 10 Tourist Places in Thailand You May Have Ignored Before

Vibrant culture, epic nightlife, beautiful clear blue waters, and serene beaches define the nation of Thailand. Thailand gives a perfect opportunity for the new couples to escape the hustle and bustle of the world and spend some time with each other in tranquility. Plan your vacation to Thailand now and take back a pocketful of wonderful memories with you!

Avid traveler and photographer. Likes to spend time in the mountains, can be found with a good book in hand.

Museums In Phuket Where You Can Get In Touch With The History, Art & Culture In 2021

4 Popular Theme Parks In Thailand That Everyone Must Visit For A Fun 2020 Getaway!