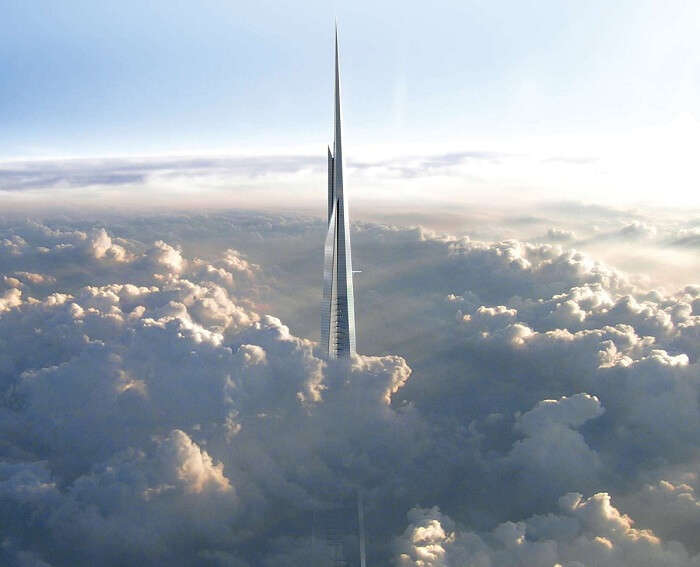 World Wars, Cold Wars, Holy Wars… What did we miss? Oh darn, the Height Wars. Oh no, we don’t mean the tallest who, rather the tallest what! We are talking about skyscrapers. And with the Kingdom Tower of Jeddah (Saudi Arabia) all set to be open as a kilometer tall building in 2016, the Height Wars have reached a new high altogether.

The title of the World’s Tallest Building is soon to be snatched from Burj Khalifa in Dubai. Saudi Arabia’s Jeddah Tower aka the Kilometer Tower, with its 200 floors, is all set to be the tallest building in the world. Here are some interesting comparisons that caught our attention.

The Kingdom Tower Vs Burj Khalifa

The Kingdom Tower Vs The Skyscrapers of London

You need to stack the 4 tallest buildings of London, one over the other, to reach the height of the Kingdom Tower.

And finally versus the tallest structures across the world

Well, this is how it fares against the rest.

But the Height Wars have been around for the last 130 years!

The term skyscraper was first applied in 1884 to the 42 meters high Home Insurance Building in Chicago. For the next 115 years, the world’s tallest building was always in the United States. These skyscrapers took a leap and even surpassed the French Eiffel Tower in 1930 with Chrysler Building in New York to be the tallest structures.

1. The architecture and the design are going to be the same or, maybe, even better.

The building is designed by Chicago-based Adrian Smith and Gordon Gill, who were also the architects of Burj Khalifa.

2. The Kingdom Tower will have the world’s highest observatory at 634 meters from the ground.

The tower will have the world’s highest observatory and a separate 98-foot-diameter (29.9 meters) outdoor balcony. The same was originally planned to be a helipad.

3. And not one or two, but 3 sky lobbies for that amazing unperturbed view of the Earth. The highest one is on level 157.

There are three sky lobbies, the highest one at 610 meters (2,000 feet) at level 157. So, it prevents any one elevator from having to go all the way up to the top, eliminating the need for excessively huge cables.

4. And patios along the three sides for views of Jeddah and Red Sea

There are amazing patios along the three sides. The shaded notches in outdoor terraces offer great sitting areas for extreme views of Jeddah and the Red Sea.

5. You don’t even have to worry about nausea in the high elevators.

A total of 59 elevators, including 54 single-deck and 5 double-deck elevators, and 12 escalators will be there in this majestic building. The lifts will, however, not be able to reach normal elevator speeds to prevent nausea due to change in air pressure.

6. And, above all, because the city itself is so beautiful.

Jeddah, a Saudi Arabian port city on the Red Sea, is a modern commercial hub and gateway for pilgrimages to the Islamic holy cities Mecca and Medina. The seafront promenade Corniche and the King Fahd’s Fountain, boutique resort hotels, beaches, and outdoor sculptures of the city have been popular among the tourists. But, the upcoming Kingdom Tower of the proposed Jeddah Economic City is sure to attract a lot of tourists.

For now, Kingdom Tower in Jeddah seems to have won the Height Wars. But only time will tell as to how long will it hold its title of the tallest building in the world.

Further Read: 23 Mythical Hotels Around The World You Must Stay In At Least Once