10 Lakes in Scotland That Are Perfect For A Surreal Vacation 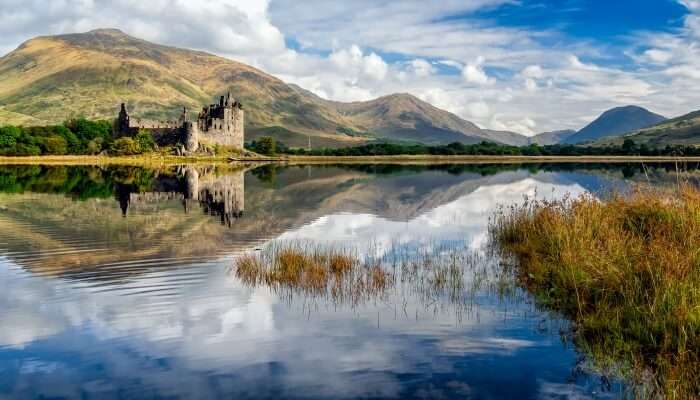 Scotland is blessed with nature’s beauty. Its mesmerizing lakes not only add to the scenic beauty but are also popular attractions among visitors and locals for fishing, hiking, water sports or simply relaxing in the beauty of nature. Lakes in Scotland carry a rich history with them, and great tales of Gaelic legends and myths add to the magic of their landscapes. The breathtaking views of the beauty of Scottish waters make them a perfect stop. The country has nearly 30,000 lakes, each of them being unique with its lure and sparkling landscapes. These lakes are home to numerous species of plants and wildlife.

In this article, we have mapped out some of the best lakes in Scotland. These are the most incredible lakes you must visit before you die.

Loch Awe is the longest freshwater lake stretching out in Bute and Argyll landscapes with a length of twenty-five miles. The lake is surrounded by high mountains of Ben Cruachan and Ben Lui. The lake has several islands, and few of them have ancient castles on them.
Location: Lochawe Village, Argyll, 3 miles west of Dalmally within the Scottish Highlands.
Things to do: Visit Kilchum Castle in summers with a boat ride.
Indulge in fishing and swimming

Must Read: 10 Festivals In Scotland To Witness In 2021 For An Exotic Dip In The Scottish Culture!

Morar Lake is the deepest freshwater lake in the British Isles. The lake has a depth of around 300 meters and is about 12 miles long. The lake is known for its sea monster, Morag which is believed to be hiding in the deep waters of it.

Location: Highlands in the British Isles
Things to do: Swimming in the clear freshwaters.
Visit to watch magnificent views stretching eastwards.

Suggested Read: 7 Reasons Why Shillong Is Called Scotland Of The East

Loch Katrine has been serving as the main water supply of Glasgow since Victorian times. Its name has been derived from a Gaelic language and means ‘cattle thief’. The atmosphere is surreal and presents breathtaking sceneries to enjoy nature at its best.

Location: By Callander, Trossachs
Things to do: Enjoy a steamboat ride from Trossachs Pier to Stronachlachar
Indulge in hiking and picnic.
Camping out along its shores

Known for its alluring beauty and famous Loch Ness monster, this lake is the second deepest lake in Scotland. The lake is nearly 23 miles in length and 226 meters in depth. The tales about the monster and its regular reported sightings can be heard from the locals.

Location: Drumnadrochit, Highlands
Things to do: Get a glimpse of its monster, Nessie.
Walk along and admire the beauty of nature.

The Lomond Lake is 39 kilometres long with the largest island, Inchmurrin. The lake is also known for being the point where two lovers parted, according to folk tales. The wild and beautiful place can be visited without travelling too far from the city.
Location: 23 kilometres North-West to Glasgow
Things to do: Indulge in water water activities
Visit Trossachs National park
Relax and connect with nature

Known for its unique kind of tidal systems, Loch Earn is located in the Trossachs National park. With the lake lies the most famous sculpture of Mirror Man. The lake is also the source of the River Earn. The lake is also known as ‘Lake of Ireland’ for the love of neighbours of Scotland.

Location: Southern highlands of Scotland, in the districts of Perth and Kinross and Stirling
Things to do: Partake in water sportsn such as kayaking, waterskiing, etc.
Sooth your mind, body, and soul

Loch Maree is described as the most beautiful lake in the Highlands. Its water is believed to cure lunacy sacredly. The lake is believed to be home to monster muc-shelich. But the monster is claimed to be only a giant eel. There are five fascinating large wood islands situated in the loch.
Location: Kinlochewe, Highlands
Things to do: Try fishing
See Isle Maree chapel dating back to the 7th century.
Witness exotic wildlife

Lake Arklet is a small and beautiful lake and is also a part of the public water supply. The lake can be reached by walking along the river from Loch Lomond. The lake is a perfect visit for all nature lovers.
Location: Between Loch Katrine and Loch Lomond, in Trossachs National Park
Things to do: Spot fish brown trout
Get a glimplse of wonderful wildlife
See picture perfect views of mountains

This lake lies in southwestern Scotland is known for its scenic views. The lake is also said to be the darkest place in Scotland. The highest peak in southern Scotland is also situated close to this lake.
Location: Galloway Forest Park
Things to do: Indulge in hiking
Get to kno abolut the intriguing history
Visit Clatteringshaws Visitors Center

Loch Muick is a freshwater lake in the Balmoral Estate. The lake is famous for red deer among the other wildlife species. The circular track around the lake is famous among hikers and bikers for a rewarding experience.
Location: Braemar, Scotland
Things to do: Climb to Loachnagar, which is well worth the climb.
Watch Glas-Allt Shiel or the Widows Hut

So in case you are planning your next trip to Europe, do not forget to visit these beauties of nature. Lakes in Scotland offer a lot to learn and indulge in the depths of natural masterpieces. You will surely feel relaxed from daily life stress and will want to revisit them. So try out Scotland today with TravelTriangle.

Q. Is Loch Ness the deepest lake in Scotland?

Q. What is the best time to visit lakes in Scotland?

A. The best time to visit lakes in Scotland is late March to May and September to November.

Q. Can we go swimming in a loch?

A. Swimming in unsupervised waters can be hazardous. Also, due to low temperatures, the cold water can cause severe water shocks or cramps in the body. However, there are lakes famous for swimming and other water sports.

Q. What is the kind of weather in Scotland all year?

Q. Which is the best season for fishing in lakes?

A. March to July end is the best time for fishing.

A. Despite being landlocked, the height of Loch Ness changes twice a day.

Q. Can we walk around the lakes?

A. You can walk and trek on the trails built around the lakes.

Lakes In Calgary Lakes In Sri Lanka Lakes In Austin

An Aerospace Engineer by profession and a freelance content writer by passion, Ankur has always had a zeal to write. He has been born and brought up in Allahabad, and strongly believes that the pen is mightier than the sword.

33 Largest Zoos In The World Where You Can Spot The Rarest Fauna And Have Ultimate Fun In 2021!

50 Weekend Getaways Near Pune For A Quick Vacation With Your Loved Ones In 2021!