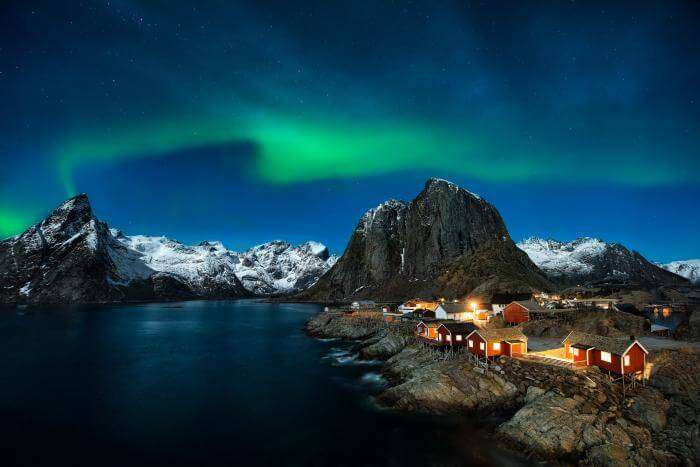 One of the most remote places in Norway, the Lofoten Islands, is also one of the most beautiful places on earth. A paradise for landscape photographers and astrophotographers, an adventure for hikers and cyclists, the Lofoten Islands boasts of rugged coasts and tall mountain peaks that are home to different birding colonies and traditional fishing villages. The Lofoten islands weather stays mild throughout the year. The fjord land experiences mild winters and warm summers.

Here is a brief travel guide to Lofoten islands holidays.

The Lofoten Islands are located in the northwest coast of Norway. This chain of mountains is one of the biggest highlights of the place. In fact, if you take all of Scandinavia into account, this is one of the best places to visit. It is a unique stretch of wilderness that shouldn’t be rushed during a visit. To really explore the place, you need to stay more than a couple of days to enjoy the authentic flavor of the place. In the Arctic Circle, Lofoten Islands is also one of the best places to see and photograph the northern lights. The region is tourist friendly, comes with small villages at the foot of tall mountains. You will also get to visit numerous beaches and can spend time whale watching.

How To Get To Lofoten Islands?

Need to know how to get to Lofoten islands? You need to start your journey from Bodø, a city located in the north of Norway, just beyond the Arctic Circle. You will need to board the ships and go on the Norwegian Coastal Voyage, which is also called The Hurtigruten. This is not a cruise, and there is no entertainment provided. All you can do on the ship is soak up the beauty of nature. After a voyage of four hours, you will reach Stamsund, a small fishing village in the Lofoten Islands. Stamsund is located in Norland, the county in northern regions of Norway.

While you are approaching Norland, you will get to see the Lofoten Wall – an extended range of mountains rising from the sea. This mountainous range is the largest island in the group of islands. Most Lofoten islands tours start from here.

Since Iceland is also a pretty famous tourist destination, it is important to know how to get to Lofoten islands from Oslo. You can directly take a 3 hours flight from Oslo directly to the Lofoten islands airport. Alternatively, you can also take a coaster steamer, a train or even drive a car to Lofoten. However, if you are going by train, then you will have to take the ferry from Bodø.

Must Read: Norway Travel – The Land of Midnight Sun Is Calling

The Geography Of The Place

The Lofoten islands in Norway have a unique geography, which makes the place worth exploring. Anyone who’s intrigued by the beauty of nature will find this place an experience of a lifetime. The places Vågan, Vestvågøy, Værøy, Flakstad, Moskenes, and Røst – all fall in the Lofoten Islands region. Some also consider the northern part of Austvågøy, Hinnøya a part of the Lofoten Islands. That is also a beautiful region, filled with hundreds of smaller islands.

The place itself is not very large. It is only 1227 square kilometers with a population of about twenty-four thousand. But in comparison to the standards of Europe, it is a decent enough area.

The Lofoten Islands territory has changed many times in the past. The Lofoten islands map has been modified over and over again. Between the mainland and the archipelago lies the open sea called the Vestfjorden. To the north is the district and archipelago – Vesterålen. Vesterålen is also the northernmost part of the Norland county. Svolvær and Vestvågøy in Vågan are two of the most important cities in the region.

The chain of islands is characterized by tall peaks, naturally protected inlets, long coastlines and large virgin areas untouched by the human civilization. The highest peak is located in Austvågøy. It’s called Higravstinden and stands 1161 meters tall. To the northeast, there is the Møysalen National Park that is situated at an altitude of 1262 meters. There is also another unique geographical feature – a collection of tidal eddies called Moskstraumen or the Malstrøm. This name is the root of the word “maelstrom.”

Here are some of the major cities of the Lofoten Islands.

1. Svolvaer: The island capital, Svolvaer has its own airport Svolvaer Airport (SVJ), from where you can fly to Leknes or Bodø, Moreover, it is also well connected to other coastal regions of Norland by boat. It is also a great place to stay. Many of the hotels in Lofoten islands are located in Svolvaer itself.

2. Henningsvaer: It is a tiny island, just 8 kilometers long. It is an active fishing village and one of the trendiest places in Norway. It is also called “the Venice of Lofoten.”

3. Stamsund: Stamsund is also another fishing village near the south. It is on the southern side of the Vestvågøy island. It’s a village with an area of about 240 acres and has a population of about one thousand.

4. Leknes: Leknes is located a few miles away from Stamsund. This is a much more active place than Stamsund. It a larger area located near the coastal region and has a larger population. Leknes also has a lot of great hotels to choose from.

5. Ramberg: If you are looking for a cozy place to stay and enjoy the winter in Lofoten islands. This place has multiple shops and a great harbor for fishing.

6. Reine: Reine is also a fishing village. Moreover, it is also the administrative center of the entire region. Tourism has been an important source of income for the city. It is one of the most beautiful regions in Norway. What makes it even better is that Reine has multiple hotels where you can stay during your visit to the Lofoten Islands.

7. Å: Å is the name of a village in Norland county. Å means “stream.” It was a small fishing village, but since the last couple of decades, tourism has become the primary
economic activity.

8. Kabelvåg: Kabelvåg is a historically significant place. It is located between Henningsvaer and Svolvaer. Some of the oldest settlements of the village go back to the early stone age.

Suggested Read: 12 Beaches in Norway Where You Can Spend A Tranquil Evening

Things to do in Lofoten Islands

You will never run out of options in Lofoten islands. Besides the events and festivals, Lofoten islands are the ideal place for all kind of explorers. You can go on a cruise along the Trollsfjord. During spring, you can also go on a self-guided tour to watch whales and orcas. Moreover, you will have more chances of seeing the whales if you are on the western part of the islands. You can see them right from the beaches, no boat ride is required.

Being such a photogenic place, the Lofoten also organizes the International Photo Festival during the month of February. It has been going on for a few years now. Several artists from all over the world showcase their works. Moreover, workshops are also organized.

If you are going to Lofoten during the summers, then you should know about their 1st May celebration. People in the region take Labour day celebration very seriously, and there is absolutely no service on those days. You will be stuck in your room unless you go out on your own and explore the area. You can go on solo Lofoten islands day tours on such days.
Surfing and hiking in Lofoten islands are two important activities in the region. People from all around the globe come here to surf in the Arctic. The Lofoten islands also have hundreds of hiking trails and offer mesmerizing views of the region.

Getting To Lofoten Islands

Due to the recent boom in tourism, communication with the Lofoten Islands has improved significantly. There are two airports on the Lofoten islands, Norway map. One is in Leknes, and another is in Scolvaer. The nearest train station is at Bodø. There are also roads that connect it to the rest of the mainland.

There are a lot of hotels in the Lofoten Islands. However, it is recommended that you book a rorbu, which is a hut that was once used by the fishermen. These are now converted into accommodation for tourists. Some of them have been built solely for tourists. For meals, you can visit the famous restaurant BorsenSpiseri. The atmosphere and the food in the restaurant are both great. Since codfish is so easily available, you will get a lot of dishes made with cod. For nightlife, the Lofoten Surfer is a decent bar.

Further Read: Shopping in Norway: Head To These 12 Places To Satiate The Shopaholic In You!

10 Awe-inspiring Places Near Monaco That Make For Perfect Day Trips!