Maharaja Ranjit Singh Museum: A Visit In The City Of Amritsar In 2022! 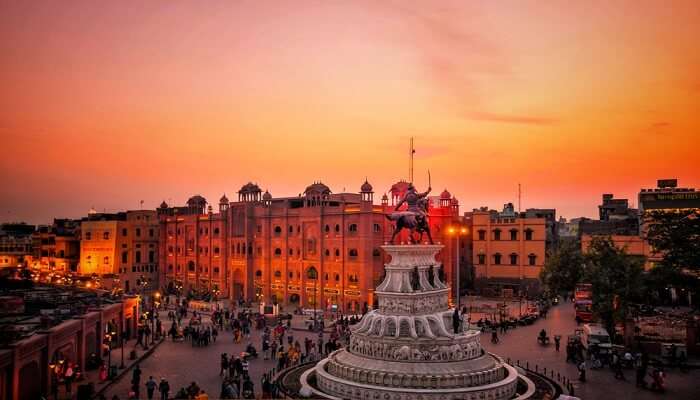 Amritsar, home to the famous Harminder Sahib, popularly known as Golden Temple is one the heritage cities of India. The Golden Temple is one of Sikhism’s most spiritual and most visited gurudwaras. The city holds a rich history from the time of partition between India and Pakistan. It also has the famous Wagah Border which holds a ceremonial flag retreat by both the countries. The history of the city is also depicted by Maharaja Ranjit Singh Museum which depicts the history and the story of the Sikh ruler Ranjit Singh. It is an important place to visit in Amritsar in order to learn more about its history.

Maharaja Ranjit Singh Museum is one of the most important attractions of Amritsar. It is of utmost importance that the weather and climatic conditions are in your favor when you visit this beauty.

November to March: These months call for the winter season in Amritsar. It is the best time to visit as the weather is as comfortable and pleasant as it can get. While the days are idyllic to witness the artifacts in the museum, the nights can get freezing cold with the temperatures touching 4 degrees Celsius.

April to June: These months are when summer season prevails in Amritsar right before the cool showers of monsoon are about to hit. With the uncomfortable scorching heat and dust, the temperature in Amritsar can sometimes rise up to 49 degrees Celsius.

July to October: The monsoon season brings a sense of relief from the heat with itself. There is heavy rain during these months. The sky mostly remains cloudy and the chilly, pleasant winds make it bearable.

Must Read: 15 Famous Places To Visit Near Golden Temple Which Will Give A Glimpse Of Punjab In 2022!

Maharaja Ranjit Singh was an important Sikh ruler who ruled the northwest Indian subcontinent during the 19th century. The very first heroic story of the king was his fight with smallpox during his early age. This deadly illness at that time took away from the king his eyesight making him completely blind. Even after this, the king fought many battles through his early age and was declared as the KIng of Punjab. Under him, the kingdom of Punjab saw many reforms, modernization and included Hindus, Muslims, Europeans, all under his government.The king also reconstructed all the major gurudwaras of the city like the Harminder Sahib and many others. WIth time he was also named as the Lion Of Punjab.

Suggested Read: Visit Rangla Punjab In Jalandhar To Relish The Culture Of Punjab

Maharaja Ranjit Singh Museum in Amritsar has been made after the great Sikh ruler Ranjit Singh. The museum depicts not only the story of the king but also about the Sikh culture and religion. The museum walls are inscribed with Sikh teachings that form an essential part of the culture. The museum also consists of many belongings of the king like his armor and swords, coins, jewelry, manuscripts and much more.

Suggested Read: 10 Festivals Of Punjab You Must Experience In 2022 To Get The Real Essence Of The Rich Culture

Maharaja Ranjit Singh Museum’s distance from Golden Temple is only 4.1 kms, in Ram Bagh. Different public transports are easily available to travel between the two places. The museum also has an alternative, Maharaja Ranjit Singh War Museum in Ludhiana which acts as another major tourist attraction, which has been made especially for the gallant warriors of the state.

Timing:
Maharaja Ranjit Singh Museum timings are from 10 AM to 5 PM. The museum remains closed on Monday.

Best Places To Visit Near The Museum

Apart from the historic museum tourists can also visit two more amazing places near the main museum. The two most visited sites near the museum are listed below.

The Maharaja Ranjit Singh Panorama is situated close to the main museum. This place holds a variety of Sikh weapons, manuscripts, artifacts and panoramas. If visiting the main museum it is highly recommended to visit here as well.

The statue of Maharaja Ranjit Singh is an eye-soothing statue created in near the museum. The statue has been built in the memory of the king and shows the king riding on his horse prepared for war. A look at the statue will leave your jaws dropped because of its size and beauty.

Suggested Read: 13 Places To Visit In Jalandhar To Experience The True Beauty Of Punjab In 2022

Once in Amritsar, Maharaja Ranjit Singh Museum is pretty easy to reach. There is a well-connected road network within the city. One can take cabs or taxis from the airport or the railway station. Here is how you can reach Amritsar for your visit to the Museum.

By Air: Amritsar is home to Sri Guru Ram Das Jee International Airport which is only a few kilometers from the city centre. It is the best and quickest way to reach here. One can readily find taxis, cabs, and auto rickshaws to cover the distance.

By Rail: Amritsar Railway Station is well connected to the major parts of this country including Delhi, Hyderabad, Agra, Chandigarh, and more. One can readily find taxis, cabs, and auto rickshaws to cover the distance.

By Road: One can bring their own vehicle or board a bus from Jammu, Patiala, Ambala, Chandigarh, and Delhi.

Further Read: Explore These Stunning Temples In Ludhiana That Are An Architectural Marvel Of The Culture In Punjab!

Amritsar is not only famous for its food and culture but its history has a deep impact on the people throughout the world. The Maharaja Ranjit Singh Museum is an important part of the history of Punjab that helps us understand the formation of statehood in the region and how the king kept people from all religions in his government. Plan an amazing trip to Punjab on your next vacation to learn more about its history and culture.

You can directly book tickets after you visit Maharaja Ranjit Singh Museum. However, it is recommended that you book in advance for a hassle free trip.

There are multiple tours like the Amritsar city tour or the Golden temple tour that include visits to the Maharaja Ranjit Singh Museum.

What is the entry fee to Maharaja Ranjit Singh Museum?

The entry fee to Maharaja Ranjit Singh Museum is INR 40 per person for adults and INR 20 for children.