Explore These Stunning Temples In Ludhiana That Are An Architectural Marvel Of The Culture In Punjab! 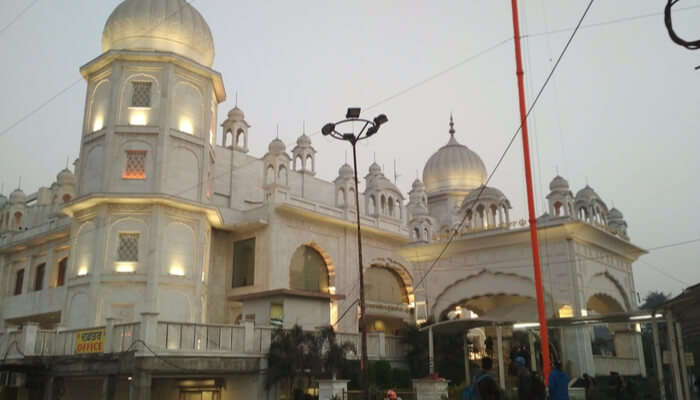 The city of Ludhiana is the largest municipal corporation in Punjab and located on the old bank of Sutlej River. Acknowledged as “India’s Manchester”, Ludhiana is the largest city in Punjab as well as in Northern India. Ludhiana is one of the beautiful tourist destinations which draws the attention of plenty of tourists annually. With so many places to visit and things to do, Ludhiana is a city of ancient traditions and it still keeps the culture intact that can be seen profoundly at these stunning temples in Ludhiana. Let’s have a closer look at these temples and what they truly represent before you plan a trip to Punjab.

The city includes beautiful temples within its map. The fact makes Ludhiana one of the major tourist destinations. Here is a list of famous temples in Ludhiana that you can visit.

The Shri Krishna Mandir is a Krishna Temple in Ludhiana. It is one of the Hindu Temples in Ludhiana located on The Model Town Extension. This temple is one of the biggest, well decorated and beautifully furnished temples that is dedicated to Lord Krishna. It is built on a 500 square yard and it boasts of more than 520 statues, with the 37 feet high statue of Lord Hanuman among its fleet. The temple provides a charitable hospital for the poor by providing free medicine and operation facilities.

Timings: 6 am – 9 pm
What to wear: It is expected that you respect the culture of the locals and honour the temple by putting on clean traditional clothing and avoid any form of fashionable wear
Temple rituals: In the Krishna Temple, the morning Pooja and Arathi to Lord Krishna begins from 7 am onwards. The people offer Chhapan bhoga to the Lordship and this is later distributed.
Famous festivals of the temple: The Dussehra, Janam Ashtami and Shivratri are celebrated in the Krishna Temple.

Must Read: Visit Nehru Rose Garden In Ludhiana For A Surreal & Fun-Filled Vacation

In Ludhiana, most of the population are Hindus and Sikhs, so you will find most Jain Temples around Ludhiana. Ludhiana is about 194 miles north of Delhi and so one of the closest Jain temples in Ludhiana is the Sri Digambar Jan Lal Mandir, situated in Delhi. It is the oldest and most popular Jain Temples dedicated to Lord Mahavira, the 24th Tirthankara of the Jain religion. The temple is built in red sandstone so it is popularly called Lal Mandir or Red Temple. This temple is very peaceful with a soothing ambiance. The temple is popular for its bird hospital. The Bird Hospital, which has been in existence for 60 years is the only one of its kind in the world, and has treated more than 100,000 birds since then.

Timings: During the summer you can visit the temple from 5:30 in the morning to 11:30 and between 6:00 in the evening to 9:30 pm. During the winter you can visit the temple between 6 am to 12 pm and 5:30 pm to 9 pm
What to wear: It is advisable to wear neat and modest clothing. Male tourists should avoid wearing shorts to the temple
Temple rituals: The temple morning prayers start from 5:30 am onwards.
Famous festivals held in the temple: The Red Temple is popular for the Mahavir Jayantha, Holi and Diwali festivals.

Suggested Read: 15 Marvellous Places To Visit In Ludhiana To Explore The Manchester Of India In 2022

Ludhiana boasts of another temple called the Sri Jagannath Temple. It is a famous Jagannath Temple in Ludhiana that is dedicated to Lord Krishna. It is also known as ISKCON Ludhiana. It was inaugurated on August 12, 2003, by His Holiness Gopal Krishna Goswami Maharaj. It is built on the Hindu temple architecture having an open, symmetry driven structure with many variations on a square grid of Padas.
How to reach:

Timings: The temple is open from 4 am to 9 pm
Temple rituals: Every day at the temple, there is the morning Mangala Arathi at 4:30 am to Lord Krishna and several other Poojas and Sevas are conducted from 7 am onwards
Famous festivals of the temple: This popular temple is known for its Krishna Ashtami and Dussehra festivals.

Another one of the temples in Ludhiana is the Shri Neelkanth Mahadev Mandir. It is believed to be the sacred place where Lord Shiva consumed the poison that came out during the Samudra Mathan, making his throat blue in the process. Today, Lord Shiva is also known as Neelakanth which means The Blue Throated One. It is one of the most historic temples in Ludhiana.
How to reach:

Timings: The temple is open from 7 am to 8:30 pm
Temple rituals: The morning Pooja and aarti to Lord Shiva starts from 9 am onwards at the temple on a daily basis
Famous festivals: The Shiva Ratri is a festival held at the temple

Suggested Read: Moorish Mosque: Why You Should Visit This Historic Gem In Punjab In 2022

Ludhiana is a major cultural area due to the diversity of people. The city is also heavily influenced by Western culture as most locals live abroad. Ludhiana celebrates its cultural legacy in the form of festivals like Lohri, Basant Panchami, and Baisakhi, these festivals have their own unique traditions. Ludhiana also boasts of rhythmic Punjabi songs and Punjabi cuisines which is an icon of Indian food worldwide.

Further Read: 5 Best Places To Visit In Nangal To Make Your Punjab In 2022 Trip Worthwhile

What is Ludhiana famous for?

It is famous for its woolen sweaters and cotton T-shirts, due to its dominance of the textile industry, it is nicknamed India’s Manchester

What is the biggest city in Punjab?

The biggest city in Punjab is Ludhiana and it is about 196 miles north of Delhi.

Is Ludhiana a rich city?

Yes. With the ease of doing business, the economy grows stronger. It is the best place for startups in Punjab and the 2nd best hospital is in Ludhiana.

What can I wear to the temples in Ludhiana?

It is advisable to wear clean traditional and modest clothing to the temples and avoid fashionable wears. Some temples don’t allow male tourists to wear shorts.

What is the most popular temple in Ludhiana?

There are three most popular temples in Ludhiana. They are Shri Krishna Mandir, Sri Sri Jagannath Temple, and Shri Neelkanth Mahadev Mandir.

How do I get to Ludhiana?

What religion can be found in Ludhiana?

The Hindus and Sikhs are more populated in Ludhiana. There are other religions but in a very small number.

Is Ludhiana a good place to live?

Yes. Ludhiana already poses a good place for business and so there will be noise, hustle, and bustle. But there are areas in Ludhiana that are peaceful, quiet and have a soothing ambiance that one can live in. it is also affordable.