10 Mosques In Japan We Bet You Did Not Even Know Existed! 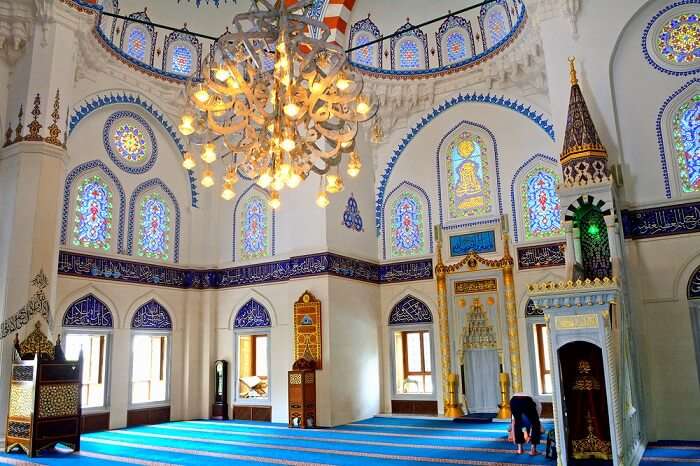 Japan is a nation where its cosmopolitan culture and traditions allow people from all walks and religions to live together in peace and harmony. In recent years, to facilitate the religious practices of the residents Muslims in Japan, a minority community, and of course for the benefit of the growing number of tourists, there has been a significant rise in construction of mosques in Japan. Interestingly, here, you won’t find the traditional architecture associated with mosques because most of these structures have been built similar to that of residential buildings in adjoining neighborhood areas where it is easy to reach for the locals for their daily prayers and rituals.

Currently, there are around 90 mosques in Japan. Let’s have a look at some of the most important and popular ones that you can visit on your trip.

The largest mosque in Japan, there is also a Turkish center associated with it. The architecture is ottoman style giving the whole structure a magnificent look. This place is very popular with the tourists as well as locals because of its religious importance and the adjoining Turkish museum. Located in Tokyo, the history of this place dates back to 1938 but the original building was demolished in 1986 and a new construction was started in 1998 which got completed in 2000 with a total of four floors. Apart from the prayer services, the place also runs educational classes on Islam for children. The services are conducted in Urdu, English and Japanese too.

Must Read: 35 Best Places To Visit In Japan That Make It Look Right Out Of A Storybook In 2022

This place is also known as Assalaam Masjid. Located in the Ueno area of Tokyo which is a popular tourist destination and receives a fair number of tourists from all over the world. This belongs to the Assalaam foundation which is a nonprofit organization involved in various educational and religious activities. In 2012, they renovated the building and made an additional community center along with the existing mosque. The structure also houses a library with a study room with an array of books on Islam. This can easily be listed among the popular mosques in Japan Tokyo.

Maintained and managed by the Japan Islamic Trust, this Tokyo mosque was founded to educate the young ones of Muslim residents in the city about the history and traditions of Islam in the 1980s. The mosque opened in 1999 and from then onwards, it is continuously involved in all kinds of community services starting from the naming ceremony, regular teaching classes, Islamic school, Nikah ceremony and so on. There are six prayer services at fixed times every day. The mosque has four prayer halls including a small one for women and kids.

Image Source
Nagoya Masjid is a mosque in Japan located in the Aichi Prefecture. The inhabited Muslim population of the area built this place of worship by collecting donations among themselves. The mosque was ready by 1998. The residents then formed an organization named Islamic Centre of Nagoya which hosts the responsibility of workings of this mosque and they have also built one more place called Gifu Mosque in Gifu in the year 2008.

Popularly known as Asakusa Mosque, this place is managed by the Institute of Islamic Circle of Japan and mainly one of its sections by the name of Japan Mosque Foundation. A straight tall structure of four floors, the place of worship was opened in 1998 and since then it has become a well-liked and visited mosque both by the locals as well as the tourists too. The location is very favorable as it is just a stone’s throw away from the famous Tokyo Skytree and Asakusa Sensoji Temple. Asakusa Mosque offers five prayer services daily and a number of community and charity services too.

This Tokyo mosque is managed by the Arabic Islamic Institute. This was started as an initiative to promote Arabic culture, tradition and education in Japan. The first educational institute for Arabic Islamic culture has been started by them. Apart from the regular prayer services, this mosque has a separate prayer room for women and they also conduct regular Arabic and Quran classes. The location of this mosque is quite central and conveniently connected with main areas of Tokyo. The place is in walking distance of Hiroo train station.

The first one to be built in Japan, Kobe Mosque dates back to the year 1935. The Islamic Committee of Kobe funded the construction of this mosque by collecting donations for a long time starting from 1928. This place was seized by the Japanese Navy in the year 1943 but still, it is functional as a mosque at present. The architecture is similar to that of Turkish style mosques. The structure has surprisingly survived the war raids in 1945 in which almost the whole city of Kobe was wiped off and also the devastation by the Great Hanshin Earthquake which happened in the year 1995.

Many people believe that this can only be a miracle and some people give credit to its style of construction and strong foundation. Kobe Mosque is situated in the busiest and well-visited tourist areas of Kobe where there are many famous old style buildings featuring mainly the western style of architecture. The mosque itself is a beautiful monument from both inside and outside. The interiors are adorned with golden paintings and pristine white walls made of marbles.

If you are a history lover and want to know more about the gradual growth of Islam as a religion and its relation with the other traditions and culture in Japan, then this place is worth a visit.

This mosque in Tokyo Japan is also known as Ohana Chaya Masjid. Located in the Yotsugi area of Tokyo, this place is minutes away from the Ohanajaya train station which falls on the Keisei Line. the mosque is within 10 minutes walking distance of the famous park in Ohanajaya. The tourists can enjoy a relaxing stroll at the beautiful park and then come to the mosque for their prayers and spend some serene moments here in a peaceful environment.

The only place of worship for Islam in the city of Yokohama, this mosque in Japan opened its doors to the public in the year 2006. Along with the facilities of daily prayer services, the mosque is also involved in various community activities like children’s education, special programs for women and also organize some events at regular intervals. The place has different prayer rooms for men and women and a fully functional kitchen. It is usually open during the day but an advance confirmation will be appreciated if you are a large group of tourists.

The very first mosque to be built on the island of Kyushu in Japan, this place was opened in 2009 to cater to around 1000 Muslim families living in the area. The place of worship is functional for daily prayers and also for different social and community events. They also entertain non muslims who have an interest in the history and traditions of Islam and are very keen to answer all the queries. One can also attend their prayers if they wish to even if they belong to a different religion. Managed by the Al Nour Islamic Culture Centre, they also offer weekly Arabic classes for different age groups, cooking lessons once every three months and organize seminars and lectures at regular intervals.

Whether you are a practicing Muslim who is visiting Japan or simply a traveler interested in knowing more about the journey of growth of Islam in the Land Of The Rising Sun, these mosques in Japan are the perfect place to learn about the Muslim and Arabic culture and its progressive transformation. Trust TravelTriangle to plan your trip for you where you can easily enjoy the sights and sounds of this alluring nation without worrying where to go next.

10 Stunning Mosques In Israel: A Glimpse Into Its Rich Architecture And Heritage

Best Lakes In Kazakhstan To Soak In The Serene Vibes Of The Gorgeous Land!

Restaurants In Kazakhstan: To Try The Local Delicacies In The Land Of Adventurers!

9 Best Beaches In Kazakhstan For Soaking In The Serene Ambience Of The Land Of Wanderers!