10 Mind-Blowing Things To Do During Snowfall In Japan 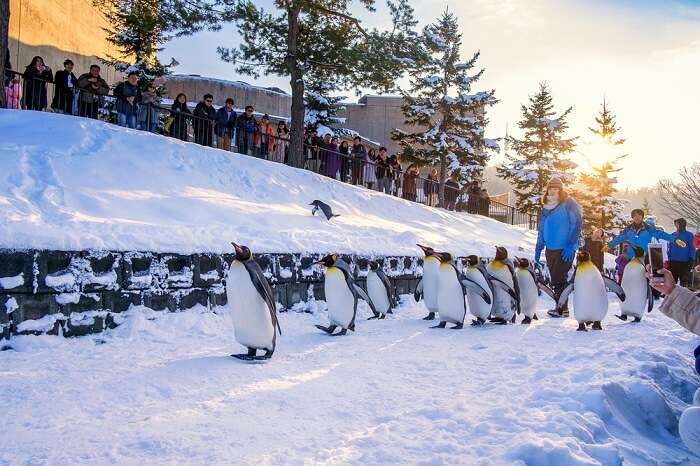 Snowfall in Japan can definitely mean heaps of snow, but don’t let the snow put your plans on hold. In fact, wintertime in Japan gives you a great opportunity to venture out and experience the country’s customs, cuisine and even the ski-slopes. If you are wondering what you can do during snowfall season in Japan, then here is a list of some fun-filled activities, which you can indulge in when it snows.

Things To Do During Snowfall In Japan

So, scroll down, and find out how you can spend your time during the snowfall season in Japan to make the most of your holiday in this charming part of the world.

1. Ski or snowboard down the slopes in Japan

Many tourists visit Japan specifically to indulge in the winter activities here. You can expect snowfall in Japan in December until March, which is quite ideal to go skiing and snowboarding. And, the best place to do so is in Hokkaido, which is filled with some of the most amazing ski resorts. The snow slopes are literally filled with heaps of fresh snow, which will definitely tempt you into skiing or snowboarding down these slopes. Hakuba, Niseko, Yuzawa, or Nozawa Onsen are known to be as some of the best places to go skiing and snowboarding in Japan.

2. Bath in an open-air Onsen

Taking a bath in an onsen is so much better when it’s outdoors. Some places which you can visit are Nyuto Onsen district, Ginzan Onsen in Yamagata and the most famous is the Noboribetsu Onsen in Hokkaido. At Noboribetsu Onsen you can indulge in a variety of hot springs, which are known to have many healing properties. Sulfur, Salt, Aluminum, Mirabilite and Alkaline springs are just some of the onsens (hot springs) available in Noboribetsu Onsen. If this isn’t exciting enough, then you can also spend time relaxing in a traditional Japanese Inn, which also known as a Ryokan.

There are many outdoor skating rinks in Japan which accommodate all types of skaters from beginners to professionals. White Sacas is one of the largest outdoor rooftop ice skating rinks in Tokyo. Imagine ice skating on a rooftop while you skate by twinkling lights and enjoy the views from the rooftop, making this place perfect for a romantic date. Ice skating season usually starts from January 5th and goes on till February 25th.

If you’ve never tried snowshoe trekking, then here is your chance to do so during the snowfall season in Japan. Snowshoe trekking is a sport which allows you to walk through snow easily with snowshoes, which gives you the effect of walking on top of fluffy and fresh snow. While you’re trekking, you will pass by numerous snow-capped mountains, mountain ranges and the most magical views, which you normally don’t get to see every day.

One of the most famous places to try snowshoeing is from the Kurumayama Kogen Ski Resort, where you can trek to the summit of Mount Kirigamine, which is one of the most famous mountains in Japan. So, don’t forget to try this activity out, when you are visiting when there is snowfall in Japan.

Drift Ice Walks are also a popular activity during snowfall in Japan, which usually takes place in Shiretoko, in Hokkaido. This is one of the most unique activities which Japan has to offer, and we can vouch that there is nothing quite as adventurous as drift ice walking. During the winter, the Hokkaido Sabin Okhotsk starts filling up with drifting ice floes.

The friendly guides will definitely help you make the most of this activity by taking you to the most amazing spots, where you can see spotted seals swimming around. A dry suit with attached boots will definitely keep you warm and toasty when you are out and about. Drift ice season starts at the beginning of February and ends after March.

The Sapporo Snow Festival is held in Japan every year, from the 5th of February until 11th February. This snow festival takes place in three main sites Odori Park, Susukino and Tsudome. The main site of the festival is the Odori Park, where you will find the most snow and ice sculptures you have ever seen. Some of the ice sculptures here range from 15 meters to 25 meters in height. There are plenty of warm beverages and food items which are easily available here too. And the best part is, they also light up the sculptures, which bring these snow sculptures to life.

The second site is Tsudome, which has a variety of snow activities such as snow slides, snow rafting and other activities which are perfect for just about anyone to try. Susukino is the smallest sites out of the 3, but it has the most action because this is where the Ice Sculpture Contest takes place. So, you will definitely see many ice sculptors in action here. And this snow festival is known to attract 2 million people every single year.

7. Admire the frozen waterfalls of Nikko

Nikko is one of the most ideal places for a two-day retreat during the snowfall season in Japan. The cold weather helps in freezing the waterfalls in the mountains of Nikko. But, before you reach, or see the frozen waterfalls, you need to make a small hike up the valley. Along the way, you can see plenty of dams and erosion projects, which were made to stop any flooding from occurring from the river flowing from Nikko, during the monsoon season.

After you finish making your way up the valley, you will definitely be surprised by the size of the ice daggers and huge columns of ice, which are part of the frozen waterfall. The best time to go hiking is from late December to early March, this is the perfect time as the waterfall freezes due to the drop in temperature.

Cherry Blossoms are one of the most famous flowers of Japan, which are, till date, visited by tourists from across the globe. And the best part is that you don’t have to wait until spring you can see them bloom in early February in Kawazu City, Shizuoka Prefecture. This city is actually known for early blooming Cherry Blossoms, which last for about only a month. So, make sure you see them bloom, during your visit to Japan.

Have you ever been to a monkey park? Well, you can when you are in Jigokudani Monkey Park located in Nagano Prefecture in Japan. This is one of the most famous and unique places, that you can visit during your time in Japan. Even though you can see monkeys all-year-round, but tourists prefer visiting this location during the winter, because the entire park is covered in snow, which is definitely a sight to see during snowfall in Japan.

There are a few famous seasonal dishes which are a must try for everyone who is planning a visit during the winter. Hotpot dish, rice cakes (mochi) and crab, are some of the most traditional and delicious dishes that you can taste in Japan. The best place to try crab all over Japan is in Hokkaido, but, there are a few amazing places in Tokyo too. There are other dishes that you indulge in such as; Nabe, Yudofu, Yakiimo, Sukiyaki, Okayu, Oden and Nikujaga. And, while you’re at it, don’t forget to try out the hot sake, which is very ideal during winter. There are also a couple of seasonal fruits which you can try during winter in Japan, the most famous of them all are Japanese Mandarin oranges known as mikan in Japanese.

So, don’t miss the snowfall in Japan or you’re gonna regret it till the time this wonderful country turns into a white wonderland all over again next year! Book your tour to Japan with TravelTriangle right away and grab the best deals!

Manali In January 2021: Know What Makes It A Great Time To Explore This Paradise