Visit Mukteshwar Temple In Pathankot For A Spiritual Journey 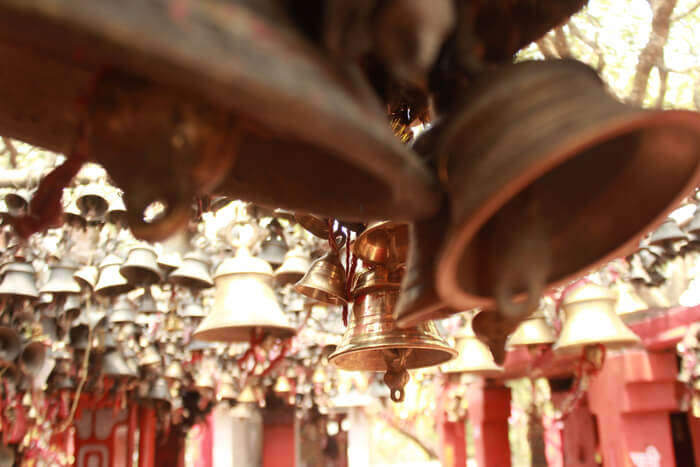 Located near Pathankot on Shahpur Kandi Dam Road, this quaint temple houses the shrine of Lord Shiva and is also known as Mukesaran Mandir. Known to be as the most sacred places around Pathankot, this temple stands tall atop a hill and reflects the beauty and charm that it exudes as an important cultural landmark for locals living in and around Pathankot. It is a significant spiritual center for many devotees who come to worship here from all across the country. This holy temple also houses the idols of Gods of the Hindu religion like Lord Ganesha, Lord Brahma, Lord Vishnu, Lord Hanuman and Goddess Parvati.

An ancient temple, it dates back to the time of Mahabharata and the legend has it that the Pandavas found respite in the caves that are situated on the banks of the Ravi River. According to the legends, the Pandavas stayed in those caves for a night during their exile and took refuge as their hiding place.

The Mukteshwar Temple has a white marble shivling that looks absolutely stunning against the backdrop of the surrounding hills and the 250 steps of climb are totally worth it because of the striking views on the way up to reach the main shrine. The spiritual and peaceful aura of this place will leave you spellbound while you travel back in time.

There’s also a fair called the Mukesran Da Mela that is held annually at this place in April to mark the Baisakhi festival. Lots of pilgrims come to worship the idol of Shiva every year from ares across Punjab and nearby localities mainly on Mukesran mela and Shiv Ratri.

Must Read: 10 Places To Visit In Punjab To Witness The True Beauty Of The State In 2019

History Of Mukteshwar Temple In Pathankot

The history of this temple goes back to the date of Mahabharata when according to the Hindu mythology, Shakuni (the maternal uncle of Duryodhana), devises a scheme to rob Yudhisthira (The eldest of the Pandavas) of his kingdom and wealth by defeating him in a game of dice, which Shakuni cannot lose due to his special dice. Yudhishthira gambles away his entire kingdom, his wealth, his four brothers and even his wife, in a series of gambits to retrieve one by staking another. So, the Pandavas end up losing all that they had and get the exile of 12 years and 1 year Incognito. This temple is said to be 55 years old where the Pandavas resided during their Incognito exile along with their wife Draupadi and built the four caves and one Lord Shiva temple at the hilltop along the coast of the Ravi River.

Significance Of Mukteshwar Temple In Pathankot

This temple and the caves hold a significant cultural, religious and spiritual value in the lives of many locals living in and around this area. These caves date back to the time of Mahabharata and served as home to the pandavas as they took respite and shelter during their exile. The Pandavas stayed here for six months during their Agyatvas and it was in that period of time when they built a Shiv temple and worshipped the Lord. The Havan Kund made by them is still present at the temple.

This place also holds a significant importance in the immersion of ashes of their kin, that usually happens in Haridwar. Hence, this place is also known as the mini-Haridwar as people do the ash immersion here and flow it in the Ravi River at the Mukteshwar Temple.

Architecture Of Mukteshwar Temple In Pathankot

These caves are situated on the banks of the River Ravi, 22 km from Pathankot City in Shahpur Kandi at Doong Village. The caves and the temple have been carved out on one of the rocky hills where the temple stands tall and exudes scenic beauty and charm that attracts millions of pilgrims and tourists every year. The Mukteshwar temple has a white marble Shivling, with a copper Yoni and is surrounded by the idols of Lord Brahma, Lord Vishnu, Goddess Parvati, Lord Hanuman and Lord Ganesha.

How To Reach Mukteshwar Temple In Pathankot

Pathankot has a strong connectivity by road through various modes of transport like private taxis or public sector bus services.

Pathankot has a military airport where a few commercial flights operate from. The frequency of these flights is less, one can reach Pathankot by air from places like Delhi, Chandigarh and Kullu. Taxis and auto rickshaws can be hired to get to the city.

Further Read: Shopping In Amritsar: Where To Shop, And What To Buy From This Historical City!

Mukteshwar Temple in Pathankot is definitely worth a visit with your family on a summer holiday to experience the scenic beauty and charm of this place. Breathe in the serenity and the good vibes at this temple that is picturesquely located at a hilltop and surrounded by the breathtaking terrain of Pathankot and the Ravi River. Plan your holiday to Punjab and make sure you visit the Mukteshwar Temple to experience the spiritual calm and positive vibes away from the hustle and bustle of the urban life.

28 Famous Temples In Chennai In 2020 That Are Artistic, Spectacular And Divine!

Visit These 9 Revered Temples In Punjab To Seek A Profound Experience In 2020!

15 Temples In Andhra Pradesh You Cannot Afford To Miss In 2020!

19 Ancient Temples In India One Must Visit To Witness The Beauty Of The Marvelous Architecture In 2020!

17 Incredible Temples In Madhya Pradesh That Reflect Beauty And Charm In 2020!