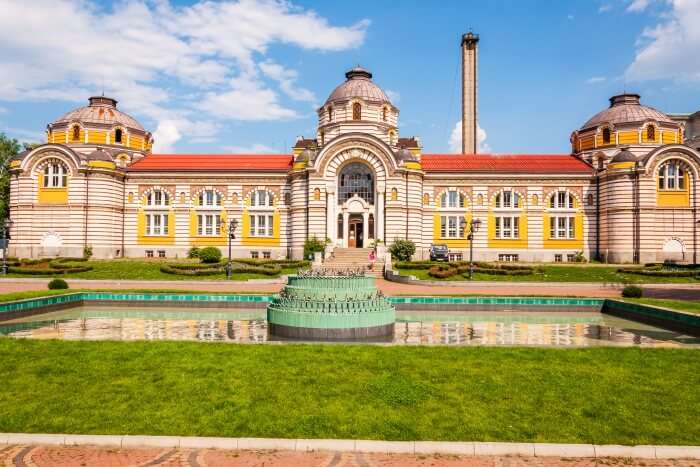 A museum holds back the historical memories of a place, how the events took place, what happened after which event and what led to what led to the inventions as we know them. Such queries are answered in museums. In Sofia, museums like The Earth and the Man is well known for preserving the minerals so, not only historical evidence but also important minerals and resources are preserved and kept here at the museums like The Earth and the Man Museum. The museums in Sofia do a great job at preserving the Bulgarian culture in a unique way for the next generations.

The historical events that had taken place are preserved at the museums of Sofia some of which are famous and some lesser known but have great historical significance. The city has some very interesting and famous museums like:

1. The Earth and Man National Museum

Image Source
The museum is considered to be the largest mineralogical museum in the world. It was founded on December 30th,1985 and visitors were allowed to visit from June 19th, 1987. The museum was built over an area of 4000m2 and had a number of rooms including laboratories, video rooms exhibition halls conference rooms etc. The museum is said to have 40% of all the minerals that occur naturally as well as by manmade processes which were basically created by the Bulgarian people. There has been a classification of these minerals which counts nearly equal to 20,000 into classes like the minerals in Bulgaria, giant crystals, precious stones. The industrially used minerals are also available and have a separate class of classification.

The Earth and Man National Museum is not only known for preserving the mineral resources but is also well known for hosting various shows, exhibitions, seminars, conferences, and concerts. The museum is at Sofia’s 4 Cherni Vrah Blvd. It is open on all days from 10 am to 6 pm and the tickets cost two leva. There are provisions for a discount if visited by students or a group of people. Availability of foreign language translators is also there.

Must Read: 11 Best Things To Do In Sofia To Experience The Best Of this Bulgarian City

The ground floor of the St. Alexander Nevski Cathedral which was earlier planned to be the tomb for the Bulgarian kings has been converted into this national art gallery which was devoted to the orthodox art. It was done so because later on no kings were buried here in the ground floor and so the tomb was converted into the museum for orthodox art.

This Alexander Nevsky Crypt Icon Museum is said to have the largest collection of Orthodox icon in the whole of Europe. This means that the collection of icons took place for a very long period and it has the history being represented through the icons itself. The Romans adopted Christianity as the there official religion and this is also depicted through icons.

Like the previous museum, this one also conducts exhibitions and it is estimated that around 200 icons are brought in the exhibition which had been collected from 13th to 19th century. Apart from the representation of the icons, the wall painting fragments, antiques and engravings are also depicted here at the exhibitions. It is because of the endeavor and hardship of 30 long years of the artisans and artists that today one can admire 300 decorative elements and frescoes. The decorative elements consist of elements of marble, gold, onyx, and alabaster.
The crypt has its entrance doors from the northwest entrance of Alexander Nevsky church. Countries like Paris, Madrid, Munich, Berlin, Brussels and many more have people who are always amazed by looking at and experiencing the icons.

Suggested Read: Top 12 Bulgarian Restaurants That Will Leave You Spoilt For Choice

Image Source
The national museum of military history is a part of the defence ministry and had a number of different names since 1 August 1914. In order to keep the memories intact, the culturally valued articles of the national and European military history are preserved and processed.

It spreads across a widespread area of 40,000 m2 outdoor and 5,000 m2 indoor exhibition area. It is now more than a hundred years old and has almost a million items like rebel flags, parade uniforms, weapons etc. which are related to the history of the army of the Bulgarians and Europeans. National Museum of History has a library and a computer center for the betterment of visitors.

The experience of the war can be done by listening to the peculiar sounds that are played like that of the hurray of soldiers, floating rivers, national military anthem etc. there are around 230 examples of the artilleries that were used during world war 2 times like that of the missile launchers. An educational program for younger students is also done here at the museum.

The ethnocultural wealth of the Bulgarians are collected and showcased at this National Ethnographic Museum which itself is built within the premises of the Royal Palace.

Like other museums, this museum has also collaborated with other museums and has delivered around 50 exhibitions in Bulgaria and abroad. It possesses 50,000 or even more items which are categorized into several categories like ritual objects, clothes, ornaments, goldsmiths crafts, carpets, agriculture, foreign arts and many more.it has shown that it is one of the richest at the Balkan peninsula because of the variety it has and because of the large number of articles like ornaments, clothes, and several other items that it encompasses within itself. The museum truly depicts the day to day life of the Bulgarians like what they wore, their functions and attitudes all are tried to keep intact and alive.

Since it has such large domain and so many items to be displayed and viewed and talk about that even the curators of the museum tell people who visit the place, some interesting facts about Bulgarian people. They tell the daily routine of the Bulgarian like the traditional way of living, the way they lived during the weekdays and the way they lived during the weekends. Embroideries are said to be one of the most important features found in the Bulgarian folklore. Now, because of so many things at one place and with so much to learn and experience, the museum has now become an educational center and it also has a Bulgarian Academy of Science within its territories itself.

Like the previous museum, this National Art Gallery also holds around 50,000 pieces of the art and heritage of the Bulgarians.it is situated at the capital city of Bulgaria and overs most of the historic and edifice of the Royal Palace of Bulgaria. During this time, the national archaeological museum had been established which was the first in the country to have an art department. This department of art became a separate part when it grew into the State Art Gallery in the year 1934. The national archaeological was praised for its outstanding works by foreign art and works of first-generation Bulgarian painter from the liberation of Bulgaria in the year 1878 and the Bulgarian national revival artists.

This museum is not only the storehouse of contemporary and national art but is regarded to have the country’s largest collection of paintings from the medieval period.it contains more than 4,000 icons and is compared to the Benaki Museum in terms of numbers and quality both by Boris Danilova.

The museums of Sofia are a must visit place for avid travelers. One can take a metro to explore the city and visit each and every place or can even take the adventurous and fulfilled rides of colourful vintage trams which certainly give a unique experience and a number of opportunities while travelling from one place to other within the city itself and by this, the satisfaction of travelers are also boosted. So, when are you heading to Europe?

These 14 Waterfalls Near Trivandrum Take Away The Breath Of Spectators, Just Like That In 2021!