7 Beautiful Naples Castles That Look Straight Out Of A Fairytale 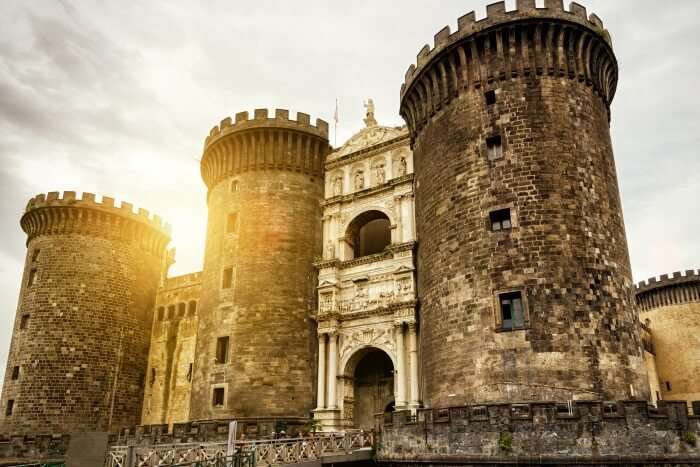 Naples is one of the oldest continuously inhabited urban areas in the world with a history that goes back to the 2000 BC! A lot of kingdoms ruled Naples including Greeks, Romans, Normans, Angevins, Aragonese, Spanish and finally the group that identified themselves as Neapolitans. It has one of the largest historic old towns in Europe and is also a UNESCO World Heritage Site. All this history ensured that Naples castles protected the city! In fact, it had a high density of castles and was even know as the City of Castles.

If you are wondering how many castles are in Naples, the answer is seven! Here is a list of the Naples Castles, some of which are preserved well, and some with a fascinating history 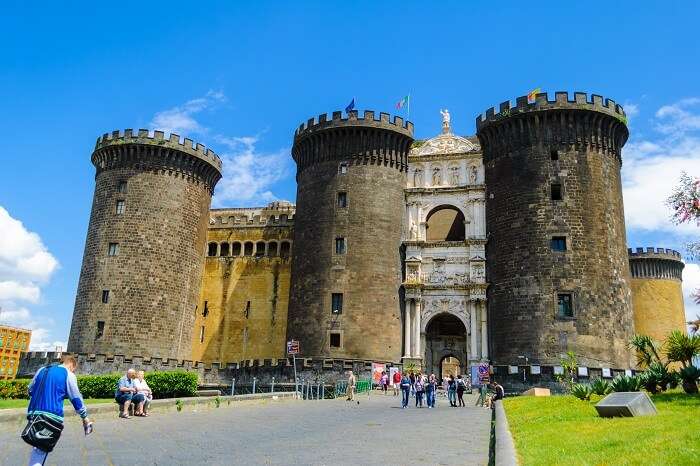 The Castle Nuovo is one of the most famous castles in Naples Italy and located right in the centre of the city opposite City Hall. Of course, the city hall didn’t exist when it was constructed way back in 1282, but the structure you see today was built in 1479. The locals also call it Maschio Angioino after Charles I of Anjou who ordered it to be made after taking over the throne of Sicily and shifting the capital city from Palermo to Sicily. The castle itself is built in an irregular trapezoidal shape and has four towers and an imposing white-marble Triumphal Arch at the entrance.

What to see: The Hall of Barons is the largest hall in the castle and was named after a sinister incident that almost seems like a plot from Games of Thrones! In 1487, the king Ferdinand I of Naples invited the regions Barons under the pretext of celebrating his nephew’s death. But instead, he arrested them and ordered them to death! The other interesting places are the Armoury Hall, the Palatine Chapel and the basement section which includes Pit of the Crocodile and the Prison of the Barons.
Location: Via Vittorio Emanuele III, 80133 Napoli NA, Italy
Timings: Monday – Saturday 8:30 AM – 7 PM
Entry fee: € 6

High up on the hillside overlooking the city of Naples is the Castle Sant’Elmo, one of the best-preserved castles in Naples Italy. The castle was originally constructed in 1329 by Roberto D’Angio. However, the castle that stands today was built in 1537. The unique star-shaped building had undergone several restorations and developments through a time when it was used as a military base, a prison and governing office. The sandstone building is in a six-pointed star shape and offers fantastic views of the city below.

What to see: Today the castle is home to the Novecento Museum which houses art collections and cultural events of Neapolitan artists, both current and old. Give it a visit to understand the culture and history of the city of Naples. The Ambulacra is the area in the castle which held the famous prisoners of the castle, while the Piazza d’Armi is the area where the military served and has various rooms for food storage, warehouses, kitchens, kilns, water tanks and sleeping areas for soldiers.

The Castle dell’Ovo is one of the oldest of Naples Castles and has a history dating back to the 6th century when Greek Kings ruled the region. It was known as the island of Megaride but is now accessible via a bridge from the main street. The castle has a formidable structure, although its name has a unique myth attached to it. It was said that during the construction of the castle a sorcerer names Virgil hid an egg in the foundations. He predicted that as long as the egg remained safe, the castle and the city of Naples would be safe!

What to see: The Castle exterior is beautiful and is located on the scenic Caracciolo Seafront, and looks brilliant at sunset. Inside the castle, many halls are often used for events, conferences and even weddings. When the events are not in progress, you can walk around the rooms and see them. The best feature of the castle is the terrace from where you can get fabulous views of the sea and the city of Naples.
Location: Via Eldorado, 3, 80132 Napoli NA, Italy
Timings: 9 AM – 7:30 PM
Entry fee: Free 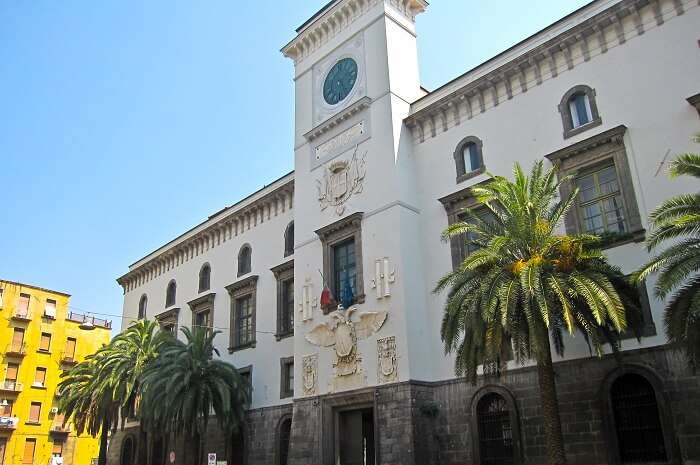 The Castel Capuano does not look like the other Naples Castles, despite it being one of the oldest castles in the city. The castle looks like an ancient building with an intricate and beautiful facade. It was built in the 12th century just after the construction of the Castle Dell’Ovo and was named after the gate at the end of the road which led to the city of Capua. The castle was later on used as a Hall of Justice which was then known as Vicaria, and housed prisoners in its basement.

What to see: The Castle Capuano is still in use today by the government. It is generally off-limits to the public however you can visit it on open days such as the May of the Monuments. Otherwise, you can enjoy the facade and head towards the rear where you can see the Fontana del Formiello, which was a public fountain with water spouts, but now you can only see the structure. 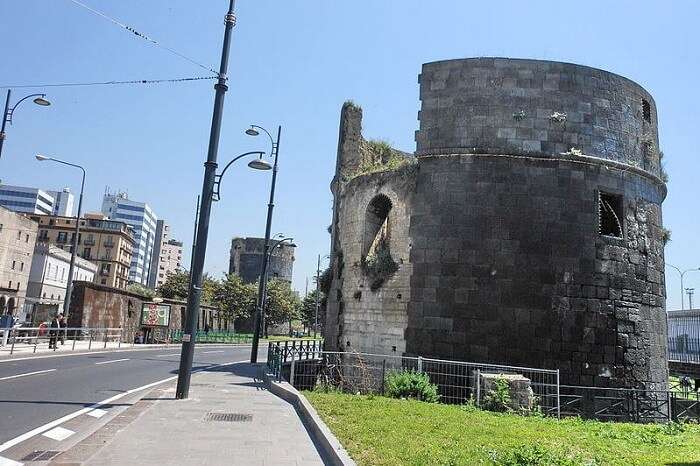 The Castello del Carmine or Carmine is one of those Naples Castles which remain just in the history books. It was built in 1382 by Charles III of Durazzo to protect the city from both sea and land. It was meant only for defense purposes and did not have the Italy's traditional architecture of castles with turrets, towers, and facades. It was a simple structure with two towers and a keep for sheltering the soldiers. It held an important role throughout the history of the city and renovations kept taking place even till 1700 when it was a critical place during the Neapolitan uprising.

What to see: Despite its importance in Naples history, the Carmine Castle lost the battle to time and development! The castle’s main parts were demolished to lay the road of Corso Garibaldi. Today, you will find remnants of the fort, its two towers and a part of the walls. You can walk to the area and take photographs and see the ancient walls for yourself.
Location: On Corse Garibaldi
Entry fee: Free 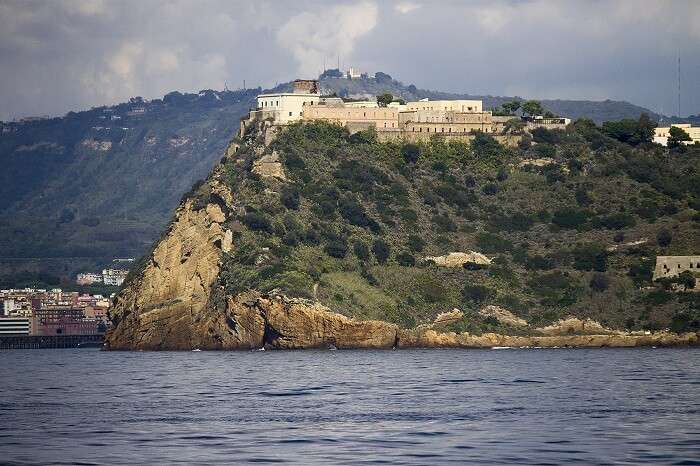 Nisida is one of the small volcanic islets just off the coast of Naples and within it is located one of the most intriguing of Naples Castles. The Nisida Castle was initially built in the 14th century during the reign of Angevins but was known to be restored in the 16th century to provide a defense against the pirates who were common back then. The island is connected to the mainland of Naples by a stone bridge. In 1626, the castle was converted to a hospital to care for plague victims and keep them there till they recuperated. From a hospital, the place changed to a prison which held many high profile prisoners.

What to see: The Nisida Castle’s use as a prison was continued when in 1934 it was converted to a juvenile prison, the first of few such prisons in Italy. Even today it remains to be used a prison, and there are no other buildings on the island. Visitors can go up to the stone bridge and enjoy the views but cannot enter the island or the prison.
Location: Nisida Island
Entry fee: Visitors not allowed 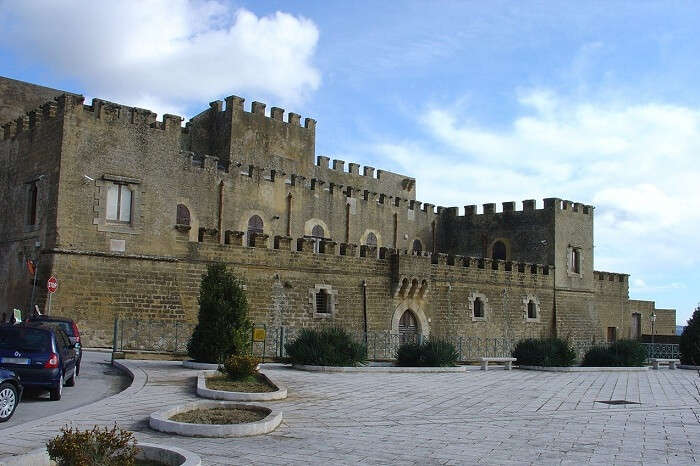 If you are searching for castles to stay in Naples Italy, you are most likely to stumble on this castle in Naples. It goes by two names – Aselmeyer Castle or Grifeo Castle and is located in the city of Naples. This is a unique castle because unlike other Naples Castles, this one has barely any history! The castle was built by an architect named Lamont Young who designed it based on English Gothic Architecture and included Elizabethan and Tudor influences. It looked straight out of an English novel instead of in the historic Italian city of Naples!

What to see: The castle is still a heritage building as it was constructed in 1902 and is built entirely of Vesuvian stone and interiors are made of wood. It does feel like an authentic castle, and while the original idea was to create a hotel, it was sold to a rich banker Carlo Aselmeyer who made it his home. But fortunes do not last forever, and the castle was divided into units and sold off. Today, it is one of the rare castles to stay in Naples Italy, and you can book a room in many of the B&Bs and homestays in the castle. The views from the top of the tower are incredible!
Location: Corso Vittorio Emanuele, 165, 80121 Napoli NA, Italy
Tripadvisor Reviews: 5/5

Further Read: Lake Como In Italy: Here’s Everything You Should Know Before You Head Out To Explore It

Intrigued by the history of these Naples Castles? They look straight out of an English novel instead of a small Italian city, don’t they? They have also become one of the landmarks of Naples over the past few hundred years. Make sure you include them on your visit to Italy. Call us and book an exciting and
memorable trip to Italy this summer! So, when are you packing your bags for Europe?