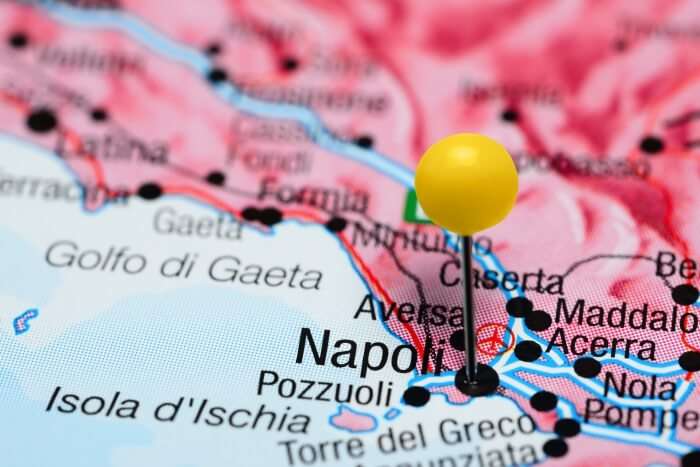 Nestled against the Gulf of Naples and tucked by the Tyrrhenian Sea, the city of Naples is a mix of myth and history. They came up with stories and myths of monsters and gods that seemed to live in this very region. Over time, several other kingdoms came to rule leaving their mark on the city. Today, Naples is a peek into history and one of the best-preserved cities in Italy. From culinary delights to historical landmarks, there is a lot to see and do in Naples. We have put together a Naples travel guide for you to understand how to make the best of your Naples holiday.

Naples is chosen by international tourists on their route through Italy and combined with trips to Rome, Venice, Florence, and Milan. Any tourist guide to Naples Italy will suggest summer as the most favored time to visit Naples, it depends on what you seek to do that defines the best time.

For sightseeing – The springtime from mid-March to early-June is the best time as the weather is not too hot and the crowds are also less ensuring fewer queues at attractions.

For shopping – Naples has the best of shopping areas and high-end designer boutiques that offer two seasonal sales, one right after New Year in January and the other in July and August.

Top 3 Places To Visit In Naples

Before we begin, remember that on the first Sunday of every month all the monuments, museums and galleries are open to public free of cost. Here are a few of them:

The topmost things to do in every Naples Italy tourism travel guide is the Naples Archaeological Museum. It is one of the best museums in the country and the building itself was constructed in 1777. The museum contains collections from Greek, Roman and Renaissance times, including the remains from Pompeii, Stabiae and Herculaneum. The mosaics and the Egyptian collection are among the most valuable ones in the museums.
Location: Piazza Museo, 19, 80135 Napoli NA, Italy

Must Read: Italy In December 2021: Top 6 Places That Take You Through The Best Of This Winter Paradise!

The Royal Palace of Naples was used as a royal residence by the Bourbon Kings during the reign of the Kingdom of Two Sicilies. The construction of the palace was done in 1600, but consecutive renovations and enlargements were done in the 18th century. Today, the palace houses a library and a museum with the collections of the kings of Naples. One of the most interesting features is the collection of Statues of the Kings.
Location: Piazza del Plebiscito, 1, 80132 Napoli NA, Italy

Suggested Read: 15 Things To Do In Naples In 2021 – An Italian City That Lives Art

Naples was once known as the city of castles and at a point of time, there were seven castles! Two of the castles are often featured in Naples travel guide as being integral to the administration and protection of the city. The Castle Nuovo is in the center of the city and is a formidable structure with four towers and high walls. The Castle Ovo or the Egg castle is out on the sea and built over rocks connected by a stone bridge. Both the castles are worth a visit to know the history of Naples.

Suggested Read: 8 Best Beach Resorts In Italy That’ll Let You Have A Serene Vacation In This Glorious Land

Top 3 Things To Do In Naples

There is a lot you can do in the city of Naples, but other than attending the famous events and festivals in the city, here are a few things you can do:

1. Gorge on a Neapolitan Pizza

The wood-fired Neapolitan Pizza originated in the city of Naples and undoubtedly is one of the things every good tourist guide to Naples Italy will mention. It’s a simple thin crust pizza with basic toppings that get their flavor in the wood-fired oven. Pay a visit to Antica Pizzeria Port’Alba which is Naples oldest pizzeria.

2. Visit during the Maggio dei Monumenti

Literally translating to the May of Monuments this annual festival is one of the best times to visit Naples. All the monuments take on a festive garb and conduct events, workshops to celebrate the culture and heritage of Naples. Many monuments which are hitherto closed for the public are opened during this time. In fact, it is definitely one of the must do things on our Naples tourist guide.

Suggested Read: Haunted Places In Italy: 9 Places You Must Visit To Get A Dose Of Spook

3. Go hiking to the Mount Vesuvius and visit Pompeii

Mount Vesuvius is the largest and most active volcano in Europe and it is also one of the most dangerous. Pompeii has witnessed the wrath of the Vesuvius way back in AD 79. Today, you can visit the Vesuvius National Park and also the ruins of Pompeii where it seems like time has stood still. It is an eerie and gruesome reminder of the fury of nature, and it is one of the top things people do when they visit Naples.

3 Places To Stay In Naples

Naples is a small city but being a tourist city it has accommodation types that suit all types of travelers. Here is a Naples travel guide for where to stay during your trip to the city –

Luxury speaks from every nook and corner of the Romeo Hotel, one of the newest luxury hotels in Naples. The contemporary design juxtaposes with the historic city of Naples and its ancient city center. The hotel has a breathtaking rooftop pool that looks beyond to the ocean, a 10,000 sqft spa for complete relaxation, and Michelin star restaurant, Il Comandante, to enjoy gourmet dining.

The Hotel Il Convento is one of the top rated budget hotels in Naples. The hotel is located in the historic quarter of Naples from the main streets – Via Roma and Via Toledo. The structure of the hotel is old-fashioned and made of brick walls, the owners have recreated a nostalgic atmosphere with candles and artifacts throughout the area.

The La Controra Hostel is among the best-maintained hostels in Naples. It offers cheap and comfortable accommodation for solo travelers and even families can stay in their private rooms. The hostel is in a nice area with easy access to public transport. The best feature of the hostel is their green backyard with citrus trees. Guests love the free breakfast that is arranged in the kitchen every day!

How To Reach Naples

Naples is located in the south of Italy and one of the largest cities in the country. It is a tourist city and has good public transport connecting it to all parts of the country. Here is a travel guide to Naples on using different types of transport –

Suggested Read: 9 Fabulous Places Where You Can Meet Santa Claus In Italy During Christmas

Further Read: New Year In Italy: For A Refreshing Start To The Most Happening Event In This Scenic Land!

One of the oldest continuously inhabited urban centers in the world, Naples has a history dating back to two millennia when the Greeks ruled the region. This Naples Travel Guide will take your on a ride back in time and yet will offer you the chance of reveling in its modernity. So, what are you waiting for? Get the best possible package for a trip to Italy and pack for a holiday you will remember for a lifetime.

An Ultimate Post-Covid Travel Guide To Kashmir: Practicing The New Normal In This Paradise