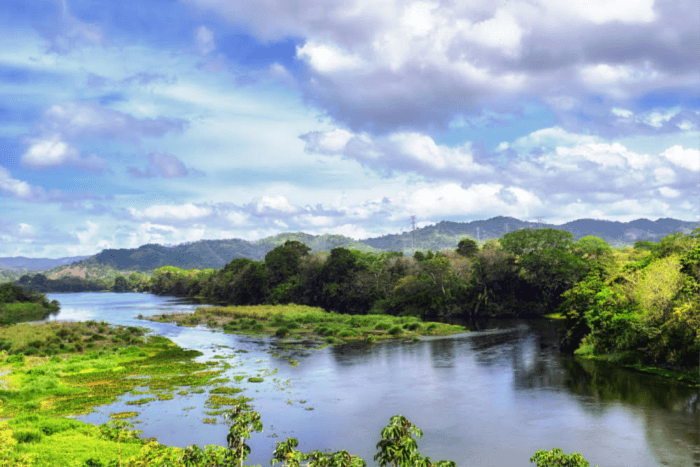 Connecting the two huge landmasses – the north and south America from two sides, Panama sits enveloped nice and pretty in Central America. Touted as the largest capital city, Panama is also blessed with an excellent topography complete with a spine of mountains that act s a continental divide, a generous number of 500 rivers and some of the best natural harbors in the world; as well as the tropical climatic conditions – together makes it conducive of a vividly bio-diversified animal habitat.No wonder, Panama is home to a number of national parks and animal reserves that attracts millions of tourists from all over the world!

With 29 percent of the landmass dedicated to conservation and 25 percent for national parks, which constitute 5 million acres of land, Panama is home to 220 mammals and 354 amphibians and reptiles – out of which 125 species are exclusively from Panama, a whopping number of 954 birds out of which 122 are migratory birds including endemic species such as hawks and turkey vultures, and a 10,000 species of plants.

The vivid flora and fauna of the land have made it one of the most favored sites for zoological and botanical studies and researches. In this blog, we will explore some of the best national parks in Panama.

Amassing an area of 579,000 hectares of land along to Panama – Colombia border, Darien National Park is one of the largest in Central America and has been recognized as a World Heritage Site since 1981. It is home to 7 mammals – fox, giant pocket gopher, tapir and five wild cat species that include Puma, Jaguar, Margay, Jaguarondi, and Ocelot. There are more than 450 bird species that also include 5 endemic ones. The famous bird watching site in this region is Cana Scientific Station which is also proximate to one of the oldest gold mines in this region. A volcanic mountain and source for some of the most important rivers such as Tuira, Balsas, Sambu, Darien National Park is also home to flowering plants such as the vibrant Cuipos and Guayacan. Other unique plants include Escalera de mono and the Bejuco de Agua.

Timing – 8 AM – 4 PM
How to reach – Located at a distance of 325 kilometers from Panama City, Darien
National Park can be reached by road till Yaviza and then by boat to EI Real in Santa Maria. The stretch between Yavitz and Colombia cannot be passed by road and has to be covered by air in the small planes that ply from the runway at the Scientific Station.

Home to a total number of 105 mammals, 525 birds species, 55 amphibians, 79 reptiles, and 36 freshwater fish species, Soberania is one of the important animal reserves in Panama. An easy to reach venue that is just 25 kilometers apart from the Panama City, the topography featured rugged mountains with steep slopes. Located on the basin of Panama canal with Charges River flowing by, Soberania experiences a very humid tropical climate. The mammal reserve includes jaguar, raccoons, white-tailed deer, small mono titi, evasive Jujana, and wild pigs. Reptiles such as Babilus, warty snake, fish species such as sabalo, Pipon, and amphibians such as common toad and salamander are some of the endemic species that are found here. Some endemic bird species that are found here include crested eagle, ground cuckoo and violaceous Tragons.

Timings: 8:30 AM – 4:30 PM
How to reach – Soberania is conveniently located at the most easily approachable distance of 25 kilometers from the Panama city. It can easily be reached by road.

This national park was established in 1985 with the purpose of protecting the Chagres River basin. It is characterized by rugged hills covered mainly with humid tropical and permatan forests. The park is home to some of the endemic species of mammals, reptiles, birds, amphibians and freshwater fishes. The mammals include jaguars and four other wild cats, tapirs, whitetail deer, Bolitoglossa and bhack-handed spider monkey. There are 59 freshwater fish species. You can see some of the endemic birds such as strip-cheeked woodpecker and harpy eagle.

Timings: 8 AM – 4 PM
How to reach – Chagres National Park is approachable by road from Panama City or Colon or by motorboat through Alajuela Lake and Chagres River.

Coiba, the largest island in Panama makes up for the widest and most vivid marine park. Covering a total of 270,125 hectares out of which a lump sum 216,543 hectares come under the sea, this national park conserves the endemic species in the island and coastal area. You can expect to see some of the most vibrant coral reefs and three unique marine turtle species. The underwater area is habituated by the whale shark, dolphin fish, mantra, tiger shark, yellow-fin tuna, humpback whale and some unique species of Dolphins. This national park is also home to 147 birds, 36 mammals, and 39 amphibians and reptiles.

Best time: January – June
How to reach – Coiba can be reached by air in 50 minutes or by road in 10 hours from Panama City. By road, it can be approached via Santiago to Puerto Mutis; beyond which you have to take a boat to reach the park.

One of the national parks in Panama City is the Metropolitan National Park. Located adjacent to the Panama Canal, this national park is characterized by a beautiful nature trail that offers a kaleidoscopic view of the city, the Panama Canal and the Balboa Port – from the top of Cerro Mono Titi. Stretched over an area of 265 hectares, Metropolitan National park is also home to a center for environmental education. It is sumptuously habituated by some of the world’s most beautiful birds, butterflies, and mammals.

Timing: 6 AM – 5:30 PM
How to Reach: The most easily approachable national park, it takes just ten minutes from the Panama City Center to reach Metropolitan National Park via Ricardo J. Alfrado Avenue.

Further Read: 15 Best Places To Visit In Chicago That Add Charm To Your American Vacay!

Panama is one of the most underrated destinations to travel but it stores some of the most beautiful sites on earth. If you are planning an international trip to the Central America region, you should put this place on your list.

Winter In Argentina: A Guide To All The Things One Can During The Winter Season In 2022