6 Offbeat Places In Thailand To Revamp Your Thai Tour Experience 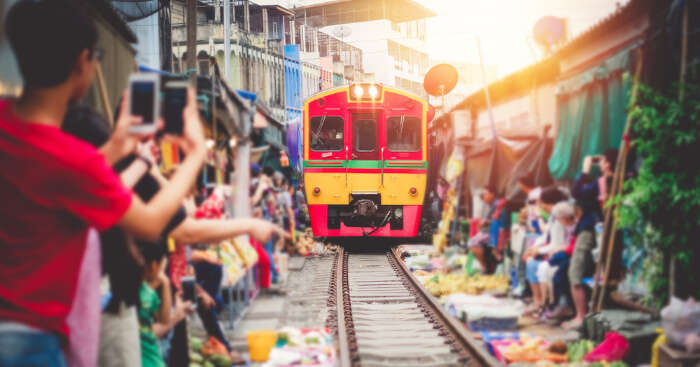 The Southeast Asian country of Thailand has always been a popular holiday destination. You may or may not have visited Thailand till now. But if you are planning to do so in the times to come, it’s a great idea to quit the mainstream touristy places and visit these offbeat places in Thailand, to see the country in a different light.

Although, Thailand is a popular tourist destination, there are still a lot of interesting places in the country that visitors don’t know about. No matter whether it you first time or your ‘Nth’ visit to this island nations, going offbeat is always a good idea. Check out these highly fascinating offbeat places in Thailand.

Are you a Beckham fan? Wat Pariwar is a Buddhist temple in Bangkok, built in the classic thai style that now stands as a huge old building. No matter how mainstream this temple looks from outside, it has some of the most quirky and colorful idols installed inside. And to your surprise, many of them are of statues of world famous personalities and superhero characters like Albert Einstein, Che Guevara, Superman, Captain America, Batman and many others. But guess who steals the limelight?

It’s the world popular football player, David Beckham! In fact, the temple is also called the David Beckham Temple. The statue of Beckham was installed in 1998 as part of the World Cup celebrations by Thai sculptor (senior monk) Thongruang Haemhod. Thongruang wanted to add it because football is the new religion, and the temple’s abbot agreed.The statue flaunts his signature hairstyle and the sponsorship logo ‘SHARP’ on his jersey.

Must Read: 9 Ayutthaya Temples That Are A Must-Visit To Experience The Best Of Thailand

Tired of touring the sugary-sweet-religious angle of Thailand? Come to hell! The Wat Mae Kaet Noi, one of the most bizzare Buddhist temples in Thailand, welcomes you to hell. The wat was built by a Buddhist monk who wanted to warn folks about their “worldly sins” and its consequences after death.

The temple has a collection of life-sized and huge-sized statues depicting some of the most gruesome acts and punishments associated with the hell. Many of them look so real that you might end up associating them with some known faces. So, dare yourself to be here!

Suggested Read: 12 Tips For Backpacking In Thailand: A List Of Do’s & Don’ts

You must have visited beaucoup Buddhist temples in your life but this one is unique, not just in its appearance, but also in its purpose. Wat Rong Khun popularly known as ‘White temple’ is a masterpiece in itself. The glittering white temple is completely studded with beautiful and intricate designs, especially on its roofs.

Wat Rong Khun was designed by Chalermchai Kositpipat, a famous Thai visual artist. It shimmers in the sun as the white plaster used for its creation contains tiny pieces of glass. By looking at the temple now, you wouldn’t be able to tell that it was badly damaged in the 2014 earthquake that had hit Chiang Rai.

Sam Phan Bok is one of those offbeat places in Thailand which you can visit only during some specific months. Located in the middle of Khong River, this place is often addressed as the “Grand Canyon of Thailand”. Sam Phan Bok is an islet that gets submerged under water during the flood season.

The circular water currents under water has caused its surface to erode, leading to the formation of more than 3,000 small basins. In fact, this place gets its name, from this very feature. ‘Sam Phan’ in Thai and ‘Bok’ in lao mean small basins.

Suggested Read: This Buddhist Temple In Thailand Is Made Of Beer Bottles, And It’s Not A Hoax!

The Death Railway in Kanchanaburi of Thailand has a horrific history as it was created by the blood and sweat of the WWII prisoners of war and Asian slave labourers. During WWII, the Japanese Army had colonised South East Asia and accumulated thousands of skilled and healthy prisoners of war, which were later used as laborers to construct their project including this railway line. Over a hundred thousand laborers died during its 16 month construction between 1942 and 1943. Originally called the Thailand-Burma Railway, it came to be known as “Death Railway” because of its story.

There is prominent bridge on the river Kwai, through which the train passes and visitors accumulate on the sides of the bridge to have a closer view of the passing train. You can also visit the Kanchanaburi War Cemetery and Death Railway Museum and Research Centre.

Suggested Read: All About The Surreal And Thrilling Thai Khao Yai National Park

Phaya Kankak Public Park is a major tourist attraction in Yasothon. ‘Phaya Kankak‘ stand for ‘toad’ in Isan language. It is a museum related to the legend of fireballs dedicated to the distinctive legends of Phaya, Toad and Rocket. The place also features science and biodiversity elements. Going by the popular legends, Phaya Kankak, a son of the king, had skin like that of a toad.

Phaya Kanak Museum is one of the three museums associated with the tradition of fireballs, with Phaya Tan Museum And the Naga Museum being the other two. The museum is built in 5-stories with its interior displaying the story of the coming of fireballs.

Suggested Read: 10 World Heritage Sites In Thailand That’ll Make You Fall In Love With It All Over Again

The climate in Thailand varies throughout the year and throughout the region. But the best season to visit Thailand is the cool and dry season that extends from November to April.

After knowing about these interesting offbeat places in Thailand you would definitely be wanting to leave for a Thai vacay right now! It’s never too late! Plan a trip, pack your bags and get going!

What is the best time to visit Thailand?

November to April has the most pleasant weather and is the best time to visit Thailand.

Which are the most famous tourist places in Thailand?

What does the white temple signify?

The glass used in the temple is a symbol of the wisdom of Buddha, and the white color represents the purity of the deity. The roof and walls have plenty of ornaments and embellishments, as well as traditional Thai architectural elements, such as the three-tiered roof and the stylized sneaks on the edges.

Who built the White Temple?

The structure of this amazing temple is the brainchild of visual artist and designer Chalermchai Kositpipat, who began working on his self-funded masterpiece in 1997. The White Temple is the popular name for the site, also known as Wat Rong Khun.

What attractions are near Sam Phan Bok?

Is the Burma railway still in use?

Yes. An organized tour takes you some part of the Thai-Burma Railway that is still in operation on a daily basis, as this is part of the Thai Railway network. The massive wooden bridges that the train travels over are amazing to see after all these years.

Is it safe to visit Thailand?

Thailand like most parts of the world is pretty safe to visit, but it’s always wise to practice a little caution while traveling in a foreign land.

What should I avoid in Thailand?