5 Picnic Spots Near Varanasi That Tell You The City Is More Than A Spiritual Abode! (2021) 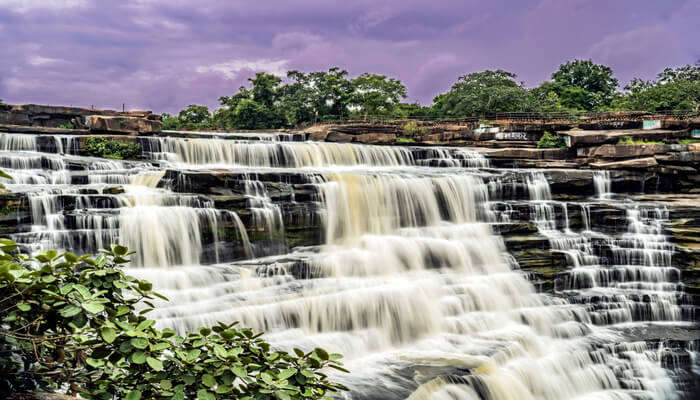 Known as the spiritual capital of India, Varanasi is one of the holiest Indian cities. The city welcomes many Hindu pilgrims every who bathe in the Ganges river water and perform the funeral rights. In this city, the weather remains 27-degree celsius. And the population is 12 lakhs. It is also known as Benares. And it is a city which is situated on the bank of the river Ganges at 320 km. The first and foremost temple would be the Kashi Vishwanath temple that makes Varanasi in the real terms of the viewers. The name Kashi comes from the city of Moksha for sins as per Hindu philosophy. And, it is known for fine quality silks and also it is one of the 7 holiest cities of India. It is also considered as the abode of Lord Shiva and the picnic spots near Varanasi make it even more exciting.

So, without further ado, we will tell you about some of the best picnic spots near Varanasi that will make your trip a worthwhile experience.

1. Rajdari: The Land Of Waterfalls

Rajdari is one of the popular picnic spots near Varanasi and is probably 70 km away from Varanasi. It is considered to be a spot for a picnic because it is filled with a majestic and beautiful waterfall and water flow cutting through the rocks, which looks elegant. Waterfalls are a major part in attracting people to go there. It is a highly crowded place with many tourists and families near Varanasi, who arrive on weekends to have fun and enjoy the beautiful and serene waterfalls. It is obvious that you are going to have magnificent views of the picnic spot near Varanasi. But, remember to visit during rainy days only because that is the only time when you will enjoy the most.

Things To Do:Enjoying, scenery views
Ideal For: Tourists, nature lovers and photographers
Best Time To Visit: July to August.
Duration: 2.5 hours.
How To Reach: Taxi or a Cab.

Must Read: 25 Places To Visit In Varanasi In 2021 For The Best Of Culture, History, & Spirituality

Devdari is 65 km away from Varanasi. It is located in Chandauli, due to which it is one of the most popular picnic spots near Varanasi. It is also known as the ‘Niagara of India’. You can visit here till 5 PM, as it is a whole of a forest area with beautiful and natural scenes. This location is an all-rounder with mobility by vehicle. It has an old Canyon covered by the range of Vindhayas, which was developed dating back to many centuries with the result of erosion due to water. It is a nice spot for having a picnic and with a pro to take your kids for enjoyment. It is a perfect place for nature lovers to have an insight into nature so deeply. Along with waterfalls, it also has filled trees and plants around the area.

Things To Do: View waterfalls, space for kids to play
Ideal For: Nature lovers, outing with family, kids
Best Time To Visit: June (Morning and evening)
Duration: 2-2.5 hours.
How To Reach: It is possible to reach from BHU nearest to it.

Suggested Read: 12 Best Things To Do In Varanasi For An Enigmatic Vacation

Chandraprabha is located 70 km away from Varanasi and another one of the popular picnic spots near Varanasi. It is a one day trip located in the Chandauli district. Actually, it is a wildlife sanctuary in the South-East of Uttar Pradesh. It lies between Naugarh and Chakia. You must have a cab or to reach there, as it would take only 2 hours to reach there rather than opting for a mode of transport like a taxi or an auto. It is a very crowded place with many people visiting there on weekends or whenever they get a good time to spend with their family. You can also have a bath or take your swimmer dress for swimming. Take prepared food along with you to eat. Rs. 50 entry ticket for Indians and Rs.600 for foreigners. Buses, Jeeps and rickshaw are best sources to reach the location, safely.

Things To Do: Walk around Sanctuary, swimming, bathing
Ideal For: Nature lovers, outing with family, kids
Best Time To Visit: June (Morning and evening)
Duration: 2 hours.
How To Reach: Here, we have some affordable ways to reach the location, given below. Have a look.

1] Take rickshaw to the Varanasi railway station.
2] Reach Mughalsarai through bus.
3] Take a jeep to Chakia from Mughalsarai.
4] After reaching Chakia, walking to distance you must take jeep ride to Rajdari Waterfall. It is also known as Chandraprabha Wildlife Sanctuary. ‘
5] On reaching the Sanctuary, walk 3 km from the entrance gate.
You can also travel through buses because Jeeps are not available after 5 PM.

It is located on the outskirts of Varanasi and is one of the popular picnic spots near Varanasi. It is an important historical site in the vicinity of the city. The architecture is a simplistic one. The fort is great because it is a section of the fort which is just out into the rocky and uneven banks of the Ganges river. It is in Mirzapur, near Varanasi. There are many ancient historical locations near Varanasi, that are good for the people to have an outing with their families or for tourists to visit the Sacred and holy places near Varanasi. It is 23 km from Varanasi, so the conveniences are easily available. It can be cited on the South-West of Uttar Pradesh in Varanasi, which is near the bank of the Ganges river.

Things To Do: Researching about the architectures
Ideal For: Families, tourists and nature lovers
Best Time To Visit: During afternoon throughout the year
Duration: 3 hours.
How To Reach: By walking or by train. The train is the best and most affordable means to reach there

Suggested Read: 15 Places To Visit In India In April 2021: Beat The Heat This Summer Like A Pro!

The Kaimur range is also known by Kymore, which is located in the Eastern part of the Vindhya Ranges is another one of the famous picnic spots near Varanasi. This range passes its way from Mirzapur and Rewa divisions. Its elevation height does not raise above 100m but covered by plains. There are many plateaus around it that contain a blend of plateaus in the east, which are Bhander plateau, Rohtas Plateau and Rewa plateau. It is stretched from Tons falls in the North-West of Bhopal. There are many uncountable or unlimited ranges near Varanasi. This range is a popular picnic spot for the people to have an outing with their families. Tourists can click pictures of beautiful plains and ranges around it. Apart from this, many prehistoric rock paintings have also been discovered, which are a great attraction for the people visiting there. Jamui and Nawada hills are famous in this region.

Things To Do: Researching about the architectures, view the plains
Ideal For: families, tourists and nature lovers
Best Time To Visit: during afternoon throughout the year
Duration: 2 hours.
How To Reach: Best to reach from the bus mode of transport.

Although, Varanasi is famous for temples it is also an educational and musical centre. Many prominent Indian philosophers, poets, and other musicians lived in this city. It is the place where the Benares Gharana form of Hindustan. Here, classical music was developed. We have top five picnic spots near Varanasi, which are the best locations for an outing with families and friends. In some of the locations, prices for entry might be charged but they are worth visiting locations near Varanasi and convenient to reach. So, plan your trip to Varanasi and explore!

Q. How far is Kashi from Varanasi?

A. It is about 5 km from the center. It can be traveled by train.

Q. How far it is Ayodhya from Varanasi?

Q. Is Varanasi, the oldest city in the world?

A. According to Hindu legend, Varanasi is more than 5,000 years old. So, it is considered as the oldest city in the world.

Q. What can we buy in Varanasi?

Q. Is Ola available in Varanasi?

A.The city of temples is one of the holiest cities in India. It is only 25 km away from the city. There are many local cans from the airport. Ola cab services in Varanasi is so available.

Q. Which month is best for Varanasi?

A.The best time for Varanasi is during the winter months that is November to February. The average low temperature is 5 degrees Celsius.

Q. Is Kashi and Varanasi the same?

A.Varanasi also called Benaras is a city in southern-eastern Uttar Pradesh state. It is located on the left bank of the Ganges.

39 Places To Visit In Varanasi In 2021 For The Best Of Culture, History, And Spirituality!

6 Amazing Places Near Kedarnath That Will Make You Extend Your 2021 Vacation!

The Kashi Virtual Tour Museum Is A New Step In The Tourism Sector Of The City!

19 Places To Visit Near Shillong In 2021 For Experiencing Meghalaya’s True Beauty!