8 Places Near Cuttack That You Must Surely Visit On A Long Vacation In 2021! 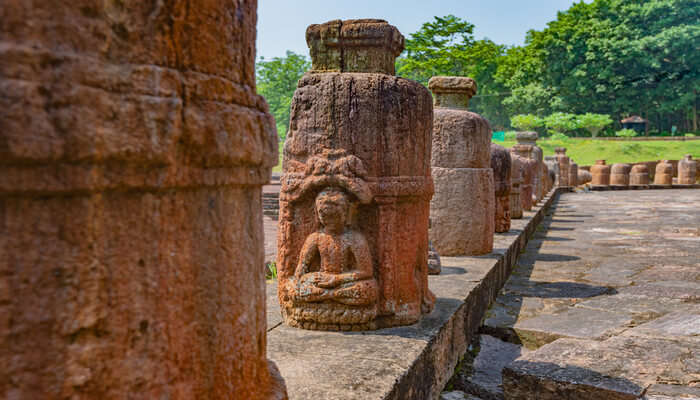 Cuttack is a city set on the banks of two prominent rivers – Mahanadi River on the north and the Kathajodi River on the south. This cultural capital of Odisha oozes out the contemporary vibes. Famed for several aspects, the beauty of local handicrafts that this city has to offer is unmatchable. Another thing that Cuttack is known for is its intricate and awe-inspiring silver work. Know about Cuttack and some interesting places near Cuttack to visit on a vacation to Odisha.

Here are the best places near Cuttack that you must surely explore. All of these places make a trip to Odisha extremely fun-filled. Do not forget to carry your cameras along to capture some memorable moments at these places to visit near Cuttack.

This city is one of the most popular places to visit near Cuttack. Puri is a  Municipality in the state of Odisha in the eastern region of the country. Sitting in Bay of Bengal, Puri is a destination that acts as a magnet for Hindu pilgrims and foreign travelers from all across the globe. This destination got its fame by virtue of the Jagannath Temple and the Rath Yatra that commences from here.

Must Read: 7 Enthralling Things To Do In Cuttack Which One Must Experience When They Are Visiting Orissa!

2. Mandarmani, West Bengal – Tranquility All Around

Sitting in West Bengal is a beautiful seaside resort village named Mandarmani. It is one of the largest seaside resorts of West Bengal, fast-developing. The beach in this village exudes charm like no other. The serene and tranquil atmosphere of this destination is something that takes away breath of travelers.

3. Nandankanan, Bhubaneshwar – The Wild Side

Ideal Duration: April to September and October to March
Pacakges Starting From:
Distance From Cuttack: 13 kms

Konark is a medium-sized town sitting in the Puri district in the state of Odisha, India. It lies on the coast by the Bay of Bengal, 60 kilometers from the capital of the state, Bhubaneswar. It is the site of the 7th-century Sun Temple, also known as the Black Pagoda, built in black granite during the reign of Narasimhadeva-I.

Suggested Read: 20 Tourist Places In Odisha To Visit In 2021 For A Fun Vacation

Dhauli is located on the banks of the river Daya, 8 km south of Bhubaneswar in Odisha, India. It is a hill with vast open space adjoining it, and has major Edicts of Ashoka engraved on a mass of rock, by the side of the road leading to the summit of the hill. This destination offers some of the most stunning views. The lush greens and serenity in its atmosphere is what impresses travelers the most.

Tajpur is located in Purba Medinipur, in the state of West Bengal, India on the shore of the Bay of Bengal (near Digha). Tajpur is set between Mandarmani and Shankarpur. Tajpur has also around 1400 acres of land dedicated to Pisciculture. There are a number of bheris or fish-ponds in the area. As a tourist attraction, it is relatively new as there are fewer hotels compared to Digha and Mandarmani. The beach is clean and home to numerous red crabs. The Government of West Bengal and Central Government decided to build the Tajpur Port in the area.

Balasore or Baleshwar is a city in the state of Odisha, about 194 kilometres north of the state capital Bhubaneswar, in eastern India. It is the administrative headquarters of Balasore district. It is best known for Chandipur beach. This little town is the cultural and economical hub Odisha which makes it extremely significant for the locals.

Suggested Read: Diwali Celebration In India 2021: An Extensive Guide To The Festival Of Lights

Chilika Lake is a brackish water lagoon, spread over the Puri, Khurda and Ganjam districts of Odisha state on the east coast of India, at the mouth of the Daya River, flowing into the Bay of Bengal, covering an area of over 1,100 km. The views of the ocean spread as far as the eye can see never fails to inspire awe. This lake surely offers some of the most mindblowing and cherishable experiences!

Further Read: 6 Cafes In Bhubhaneshwar That Are Local’s Favorite Places To Hang Out & Chill

Excited to explore all these above-listed places near Cuttack? Plan a trip to Odisha and cover all of them one-by-one. There are several other places to visit apart from these that you can add to your list. With something or other for every kind of traveler, this is one city that is surrounded by some of the most fun-filled tourist destinations in the country!

17 Fabulous Places To Visit Near Nagpur For A Refreshing Weekend Getaway In 2021!

6 Amazing Places Near Kedarnath That Will Make You Extend Your 2021 Vacation!

19 Places To Visit Near Shillong In 2021 For Experiencing Meghalaya’s True Beauty!