10 Places To Visit In Bishkek In 2022: A Detailed Guide For Your Next Trip! 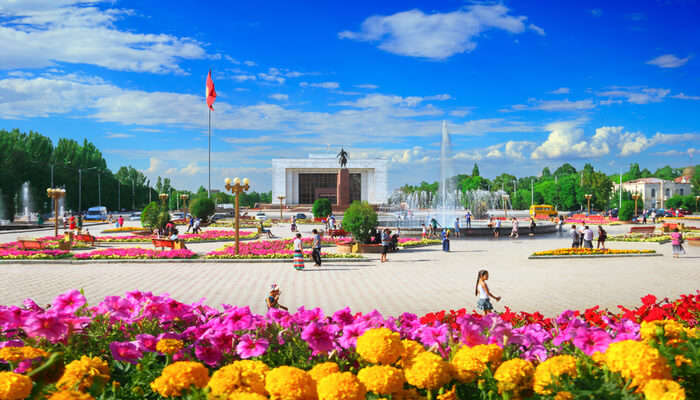 The capital of Kyrgyzstan, Bishkek, is the borderline of Central Asia’s Tian Shan range. The Kyrgyz Ala-Too mountains and Ala Archa National Park adorned with wildlife trails and glaciers, concludes the scenic beauty of the place. Be it the monumental State Museum of Fine Arts or the ballet theater, the city’s artistic background will dazzle one’s senses. The city is home to some of the most heavenly places to visit in Bishkek.

Filled with exotic foliage and historic post-Soviet anachronisms, Bishkek is a city engraved with cultural nuances. The vibrant and youthful atmosphere of the place is the reason why the city witnesses a massive tourist turnout every year. The pulsating nightlife of Kyrgyzstan’s capital city is unparalleled. They they way to one’s heart is through the stomach. If that’s the case, then the city’s food scene is definitely going to ring a bell. Be it the mouthwatering Oromo or the tasteful Besh Barmak, one is served with a myriad of food choices.

10 Best Places To Visit In Bishkek

From the alluring architecture to the beguiling landscapes, the city offers a cornucopia of pursuits to indulge in. We have compiled a list of places to visit in Bishkek that one shall stick to in order to have a memorable experience!

The architectural showpiece, formerly as the Lenin Museum, is situated on Ala-Too Square. The museum catalogues exhibitions where a plethora of ancient artifacts are put on display such as rock paintings, accessories belonging to the Nomadic Era, Bronze Age Household Commodities, an assemblage of Turkic kurgan stelae, Ancient coins and rocks etched with runic imprints.The museum houses an all-inclusive collection of ethnographic items like leather, wool, clothing, jewelry etc.

Must Read: 9 Things To Do In Bishkek That Will Make You Fall In Love With The City

Boulevard Erkindik is one of the most renowned public spaces in Bishkek. The locals love to take a stroll in the long streets with foliage all around. Be it an early morning stroll or grabbing a cup of ice cream from Fresco, Erkindik Boulevard is the quintessential leisure locale. Regarded as one of the top places to visit in Bishkek, The location is jam-packed with a wide range of eateries and coffee shops. If you ever come to this magical place, do witness the Musical Erkindik!

Osh Bazaar is one of the largest markets in Bishkek. It is situated on the west side of the city. The market features a wide variety of food products, customary household goods, classic souvenirs, dated clothing pieces and musical instruments. Shopaholics visiting the market are going to have the time of their lives!

The public square was established in order to celebrate the triumphant victory over Nazi Germany. It was constructed on the occasion of the 40th anniversary of the Liberation of USSR in 1984. In the heart of the square stands a statue of a woman waiting for her spouse to return from war. The square is enveloped together by three ribs of granite which symbolizes a yurt. The nucleus of the square is housed by an eternal fire.

It is a giant minaret situated in the Chuy Valley, northern Kyrgyzstan. It is at a distance of about 80 km east from Bishkek. The remnants of the ancient city of Balasagun can be still unearthed along with a few grave markers, earthworks, three mausoleums and a few leavings of an ancient castle. An external stairway is accessible in order to climb to the top.

The Ala Archa National Park is situated in the Tian Shan mountains of Kyrgyzstan. The alpine national park was established in 1976, 40 km south of the capital city. The park sprawls across 200 square kilometers. There are more than 20 large and small glaciers with some 50 mountain peaks.
The Adygene and Ak-Sai, are two tributaries, sprung out of the glaciers’ melting waters. The park is a visual treat and offers a serene environment. It is truly in every sense, one of the best places to visit in Bishkek Kyrgyzstan.

Suggested Read: 36 Best Places To Visit In Southeast Asia In 2022 That Won’t Let You Put Your Camera Down!

The park features a small open air sculpture garden behind the statue of Kurmanjan Datka, amidst the oaks. Travelers looking for local themed paintings will find a wide range of timeless art pieces sold by talented artists. The park has been renamed after the esteemed author, Chingiz Aitmatov. The locals address it as ‘oak park’.

Suggested Read: 3 Places To Visit Near Asian Civilisations Museum That Are Perfect For The Explorers!

The endorheic lake has been crowned as the seventh deepest lake in the world. Ranked as the tenth largest lake in the world by volume, the lagoon sprawls across 6,236 square kilometers in area. Issyk-kul translates to ‘warm lake’ in Kyrgyz. The moana is extensively surrounded by snow-capped peaks but surprisingly enough, it never freezes.

The park is a city memorial situated near the Old square. It was founded in the year 1924 as Zvezda Park. The park was named after the Hero of Soviet Union and the chairman of the Kirghiz SSR, Ivan Panfilov. The park is designed in the shape of a star. The park offers a beautiful foliage with a relaxing undertone. It is one of the best places to visit in Bishkek Kyrgyzstan for a tranquil experience.

Suggested Read: 23 Romantic Honeymoon Destinations In Asia In 2022 For Every Budget

Dordoy Bazaar, also spelled as Dordoi Bazaar, has been crowned as Asia’s greatest market place. It a wholesale and retail market of consumer goods dispatched by China. The existence of the market can be dated back to the year 1992. The market is divided into different sections selling various consumer goods and commodities such as clothing, furniture, toys, automotive supplies etc. One can also find occasional produce vendors accommodating the market.

Regardless of all the atrocities Bishkek has managed to endure and overcome, It is a city that radiates positivity and happiness. With so many magnificent places to visit in Bishkek, travelers will always be on their toes. If you are ready to hit that bucket list, then plan a trip to Bishkek with TravelTriangle and have an unforgettable experience.

Frequently Asked Questions About Places To Visit In Bishkek

What is the local language spoken in Bishkek?

The primary language used in Bishkek is Russian. Also, in hotels, restaurants, and several tourist places, you will find people who can converse well in English.

What is Bishkek famous for?

Bishkek is adorned with a plethora of tourist attractions where travelers can visit and make most of their vacation. Some of the top-rated places to see in Bishkek which should definitely be visited include Ala Archa National Park, Ala-Too Square, Erkindik Boulevard, Victory Square, and many more. Also, this place is not only ideal for families, but for couples and solo vacationers as well.

How many days are enough to explore Bishkek?

To see almost all the attractions in Bishkek, a 2-3 day trip is suffice. With numerous of places to visit and things to do, this destination is a perfect hub for naturists and globetrotters. Also, if travelers want a bit more relaxing vacay, then they can plan a trip of 5-6 days.

Is Bishkek safe to visit?

Bishkek is quite a safe destination. Even if you are traveling solo, you will feel safe while visiting this place. Interestingly, even after being a populated city, Bishkek boasts a very low crime rate.

What is the best time to visit Bishkek?

Bishkek is one destination that experiences a huge influx of travelers throughout the year. If you are interested in adventurous activities like skiing, hiking, trekking, and mountaineering then months from April to September are the best ones. Apart from this, if you are fond of cold weather, then you can visit during winter months that are from October to January.

Which tips one should keep in mind while visiting Bishkek?

Following are some common things one should pay heed to while traveling to Bishkek: 1. Since English is not commonly used here, you can hire a translator 2. The weather in Bishkek is unpredictable. So, travelers are recommended to pack for both hold and cold weather conditions 3. It is advised to carry local currency in care if card payment is not accepted