14 Places To Visit In Czechia On Your Europe Backpacking Trip 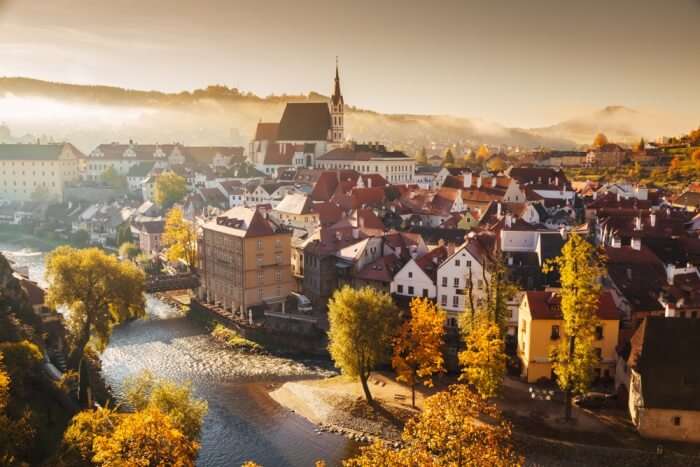 The Czechia is a favourite tourist attraction for many travellers who are looking for something off the conventional European route. With a variety of picturesque historic cities, top class architecture, dreamy castles and beautiful natural wonders, this Central European nation should certainly be present in every itinerary. It is a dream getaway for those who like older architecture, partly because this small landlocked country was largely unsullied during the world wars. The result is a never ending list of scenic places to visit in Czechia.

Top 14 Places To Visit In Czechia

While you waltz around, why not experience the fantasy world? Czech has a lot to offer to its guests. Take a look at these 14 places to visit in Czechia: 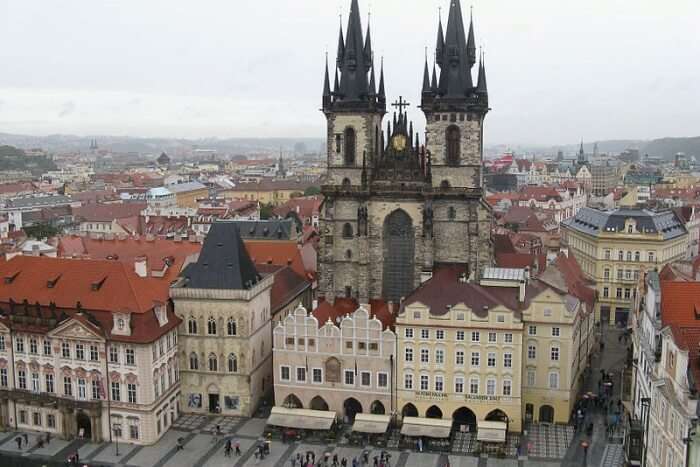 It was founded in the 12th century. It is the most vital square in historic Prague and has witnessed several historical events. Along with the Old Town Hall and Our Lady’s Church before Týn, the square is monopolised by St. Nicholas Baroque Church, Rococo Kinský Palace, Stone Bell Gothic House and Jan Hus Monument. The memorial stones describe the slaying of 27 Czech lords in 1621 and the meridian of Prague is on the square. 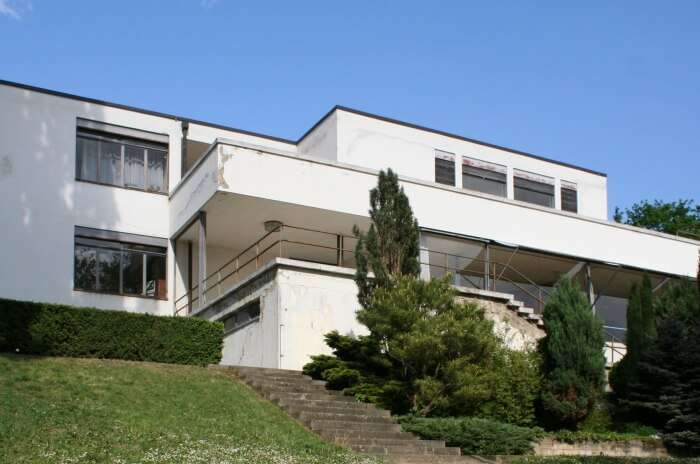 The Villa of Greta and Fritz Tugendhat, which was designed by designer Ludwig Mies van der Rohe in 1929, is a modern architectural monument and is the only instance of contemporary architecture in the Czechia. It is listed as a UNESCO World Cultural Heritage Site. It houses an exhibition portraying the owners, the architect and the family life in the Villa until 1938, when the Tugendhaft were compelled to immigrate due to the risk of the Second World War. 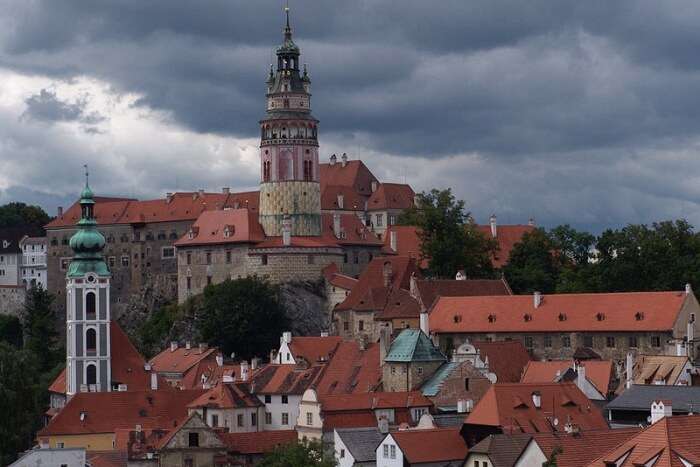 The Český Krumlov Castle is among the most essential architectural and cultural memorials in Central Europe. Maybe it is because of its hidden position in the far corner of South Bohemia. The initial layout, material framework, interior installations and architectural particulars from the 14th to the 19th century are a constant reminder of Czech history. 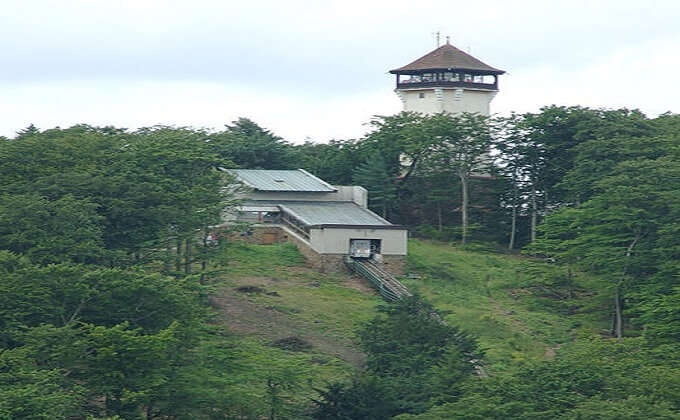 Diana is probably Karlovy Vary’s most popular tourist attraction. Take the Colonnade Street to get directly to this lovely place. You can eat in the restaurant Diana, encircled by spa forests while viewing peacocks. From the Diana lookout tower, you can take flawless pictures of all of Karlovy Vary and the surrounding countryside. There is also a historic restaurant for hikers and a shop with food and trinkets. Do not overlook he entrance to the observation tower, the mini zoo and the play area for children. 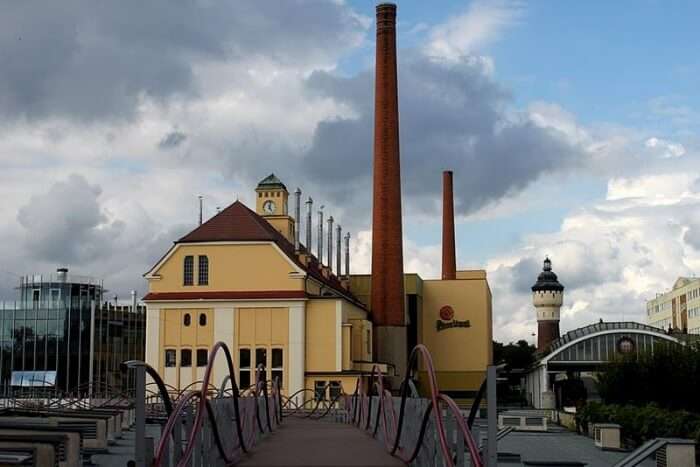 Each nation has its icons and lore, and the Czechs include the Pilsner Urquell lager, which has been distilled into a town called Plzen (Pilsen). Since then, the notoriety of Pilsner Urquell beer has spread far and wide. Over two-thirds of the beer manufactured today is commonly known as pils, pilsner or pilsener, influenced by this exceptional brew. 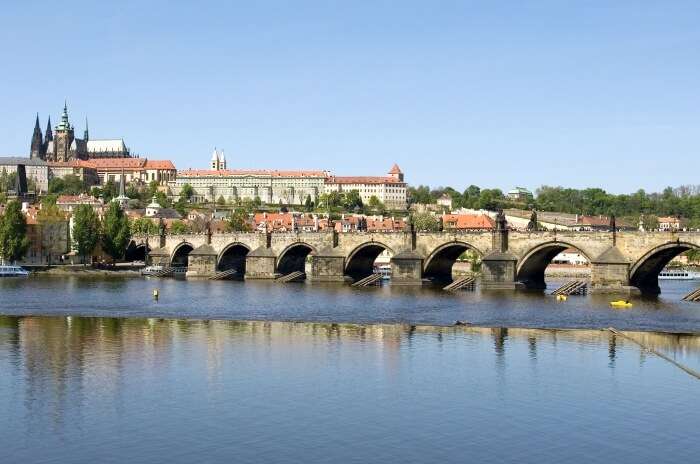 The oldest bridge in Prague was constructed in 1342 to displace the Judith Bridge, which was severely damaged by catastrophic flooding. The Stone or Prague Bridge, known as the Charles Bridge since 1870, was commenced by Charles IV in 1357 and finished in 1402. The bridge is constructed of blocks of sandstone, surrounded by patrolled towers at each end. From 1683 to 1928, the bridge was decorated with thirty statues of saints, perhaps the most popular of which was the statue of St. John of Nepomuk. 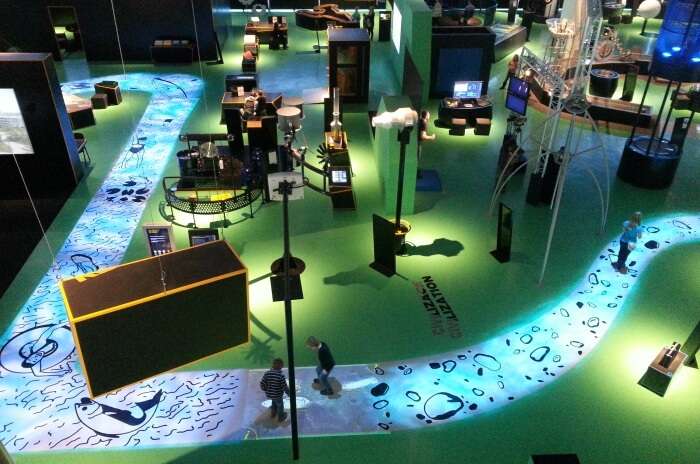 There are many experiences waiting for you in VIDA! Centre of science. In the vicinity of the Brno trade fair complex, playful adventurers of all ages will find more than one hundred and seventy interactive displays. These displays encompass almost 5,000 square meters, offering young adults a stronger comprehension of the world around them. 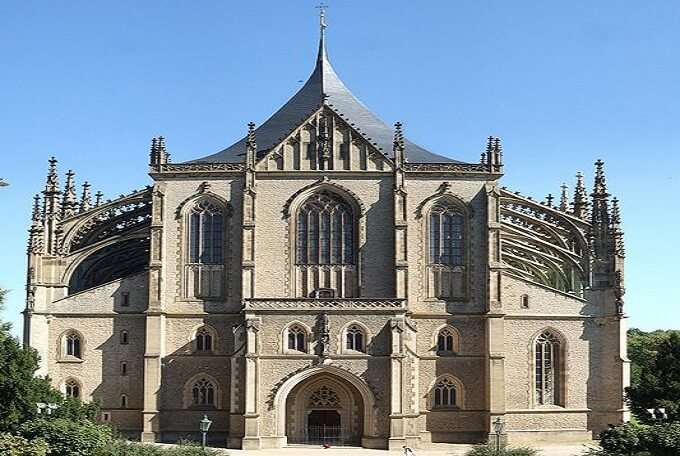 The most incredible scenes of the Church of Saint Barbara are concealed from the eyes of the visitor. The churches were not only constructed for our adoration, but they are primarily devoted to God and the oddest objects are placed high above the church. You can laud the terrific fauna, like chimaeras, bats, daemons, harpies, frogs and winged rams, with the help of binoculars. You can find a monkey holding an orange on one of the southern pillars. 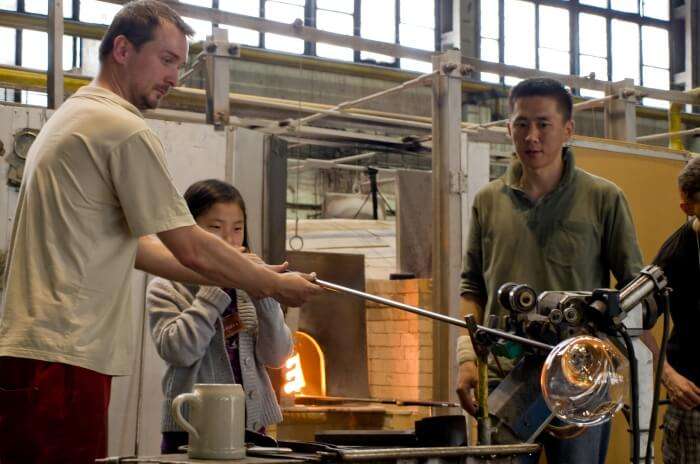 Inhale the aroma of fired wooden moulds and the 160-year old history of the glassworks in Moser. You can also attend the Karlovy Vary shopping gallery or the museum, whose exhibits depict the history of glass works, ranging from the most ancient creations to the latest catalogues.

Suggested Read: Top 10 Theme Parks In Czech Republic That Will Bring Out Your Inner Child 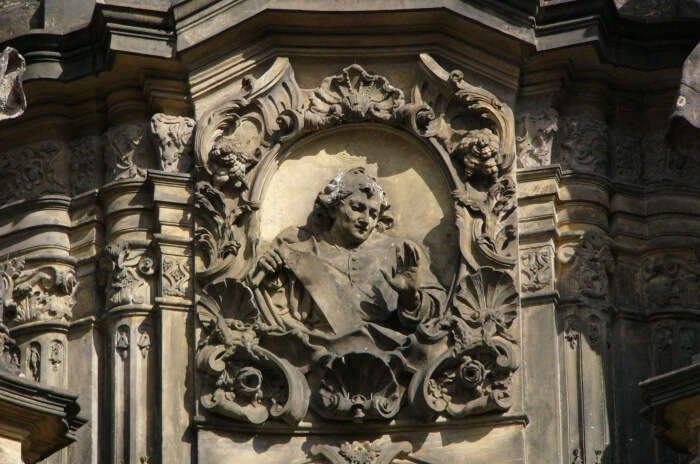 Situated in a solitary sculptural memorial in Europe, the Holy Trinity Column in Olomouc is the biggest assemblage of baroque statues. The column is 35 meters high and its bottom part is home to a chapel. The sculptural decor consists of eighteen stone sculptures sculpted by saints, twelve light-bearers and six relief bustles. The column is monopolised by the Holy Trinity’s golden copper sculptures on the top and the Assumption of the Virgin under it. 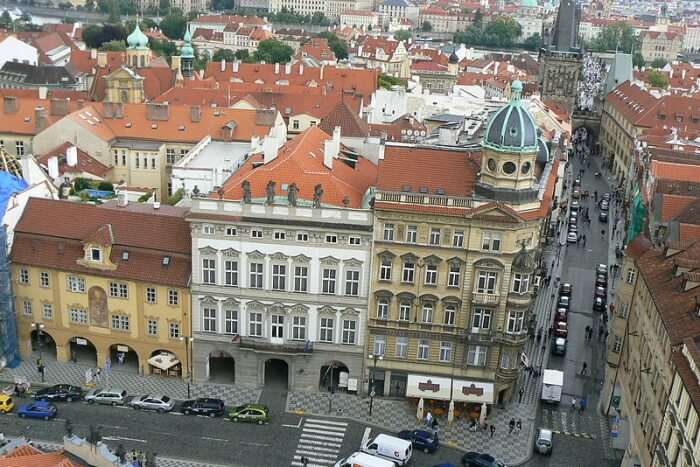 The Lesser Town, or just the Lesser or Little Quarter, is clustered around Prague Castle’s foothills on the opposite banks of the Vltava River from the Old Town. The Lesser Town is practically too scenic for its own sake-with its olden burgher houses, rustic side streets and St. Nicholas Church. The Town is a favorite place for films and advertising. 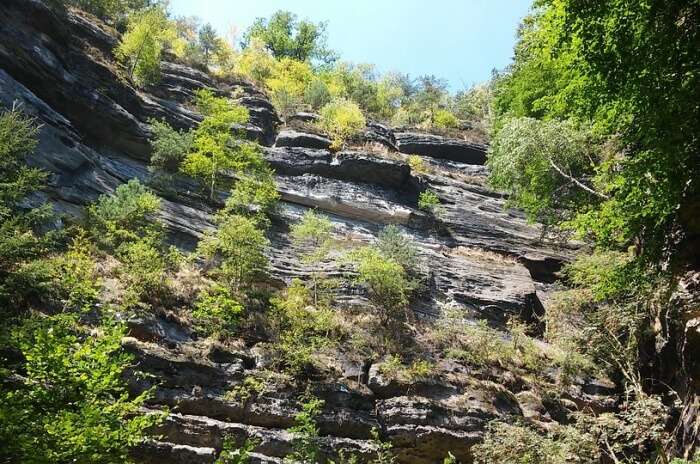 The Bohemian Switzerland National Park, established on 1 January 2000 and covering an area of almost 80 km sq, is the newest national park in the Czechia. The park is connected to the Saxon Switzerland National Park in Germany, which was founded in 1990 and encompasses an area of 93 km sq on its northern side.The National Park’s mission is to maintain the beauty of the region and to allow natural processes to occur in this region organically. The human interventions are restricted to maintain natural balance in this place. 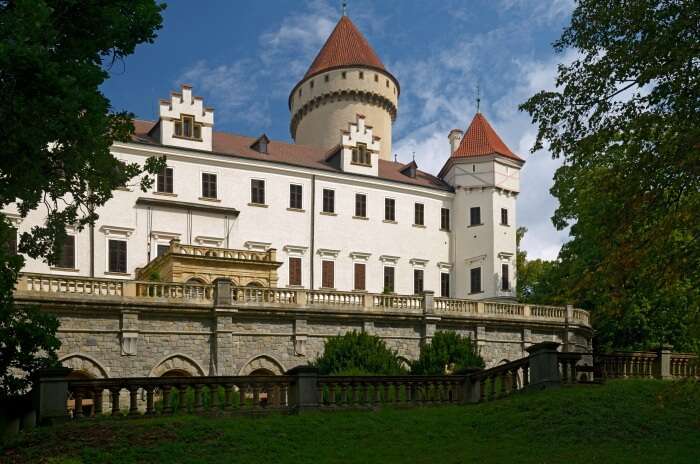 This intimidating castle was founded in 1300 by the Benesovec family and is a splendid example of the medieval fortification architecture inspired by the French.This building, which began as a Gothic castle in the late 13th century, has been one of the most important historical figures over the years. The last proprietor was the successor to the Austro – Hungarian crown, Archduke Franz Ferdinand d’Este, who was slain in Sarajevo in 1914 along with his wife Sophia. 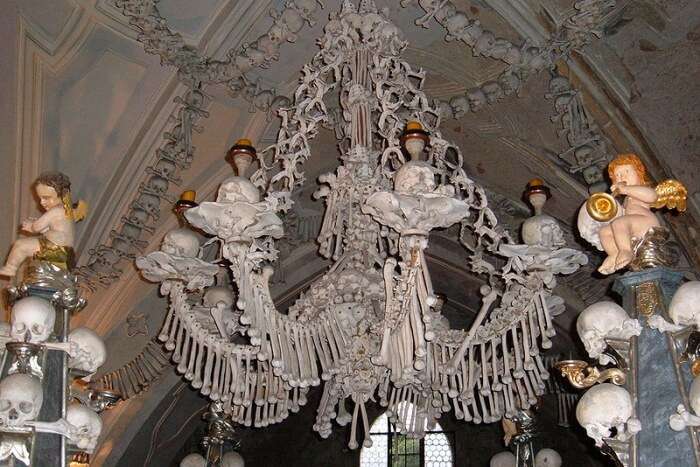 The Sedlec ossuary, a tiny chapel in the cemetery of the Church of All Saints, is adorned with bones of almost forty thousand people. In the four bends of the chapel, the biggest collection of bones is organised in the form of bells.The most intriguing creations are the chandelier in the center of the nave, which contains all the bones of the human body.

The Czechia is bubbling in the very soul of central Europe with a mixture of Bohemian history, Moravian elegance and Slavic panache. Its towns are bordered by Gothic wonders and are bursting with Baroque majesty. Its countryside possesses eye-catching forests, cave systems and mountainous regions. We hope this list helps you to experience these pretty places to visit in Czechia on your trip to Europe.

Frequently Asked Questions About Places To Visit In Czechia

What is the best time to visit Czechia?

The ideal time to visit Czech Republic is during spring which is from mid-March to mid May. Other than this, fall (September – mid November) also makes a wonderful season to explore Czech. The weather is utterly pleasant during these months.

Which are some of the best spots for couples?

Out of many, these are the best romantic places in Czech Republic for couples to visit: 1. Lobkowicz Palace 2. Moravia 3. Karlovy Vary 4. Castle Hill 5. Olomouc 6. Mariánské Lázně 7. Třebíč 8. Liberec 9. Pruhonice Park

Which places in Czechia showcase its nightlife?

Is it safe to drink tap water in Czech Republic?

It is safe to consume tap water in large cities like Prague. If travelers are visiting rural areas, then it is recommended to drink bottled water only.

Which are the top-rated tourist attractions in Czech Republic?

What is the currency used in Czechia?

The Czech Koruna is the currency of Czechia.