7 Historical Places To Visit In Fatehpur Sikri Which Gives A Glimpse Of The Mughal Architecture In 2022! 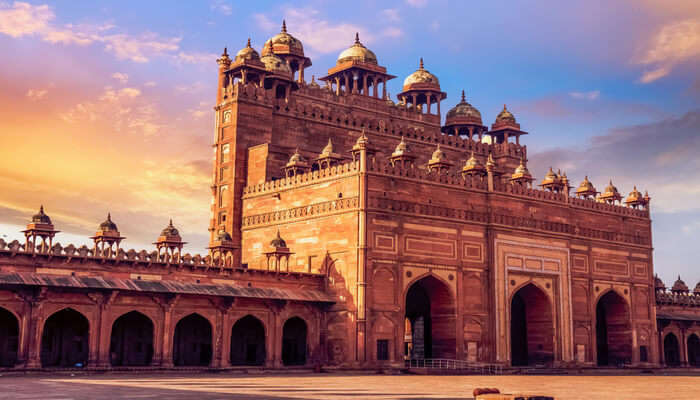 Beyond the beauty of Agra’s Taj Mahal, Fatehpur Sikri is another feather on the cap of the Mughal Emperors. Once considered to be the capital of the Mughal Empire, this medieval city holds a special place in the history of the Mughals. Known for its marvelous architecture and intricate carvings, the city is blessed with some of the finest structures to admire. From the palaces to the masjid, there are a lot of places to visit in Fatehpur Sikri which are worth visiting to witness the beauty of these historical monuments.

Here are some of the best places to visit in Fatehpur Sikri which one must visit to admire the beautiful architectures which reflects the royal history. 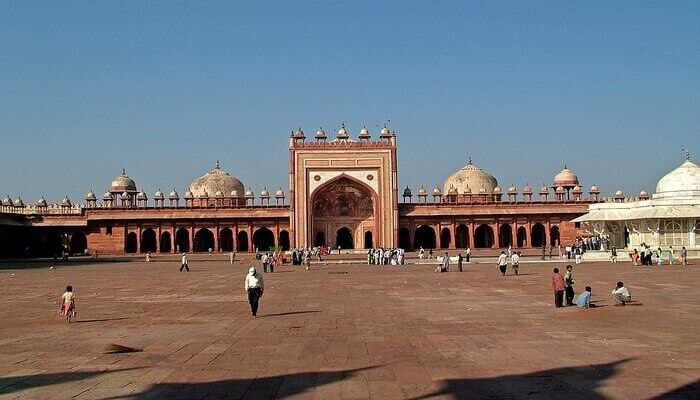 Jama Masjid is considered as one of the country’s largest mosque which was recognised as a world heritage site by UNESCO in 1986. Built by Emperor Akbar during the time between 1571-72 AD, this mosque is also called the Friday Mosque. Under the supervision of Sufi Saint Sheikh Salim Chishti, this magnificent mosque was designed and built. The mosque has a rectangular structure which has a vastly spread courtyard along with an entrance from the North, South and East. The interior of the mosque is decorated with glazed tiles, inlaid stones and also paintings which are intricately carved with the Holy Quran.

Timings: 6AM-6PM
Distance from the city: 1 kms
Entry Fee: INR 20 for Indians and INR 260 for Foreigners

Must Read: A Boat Ride From Delhi To Taj Mahal Is On The Cards & We Can’t Keep Calm! 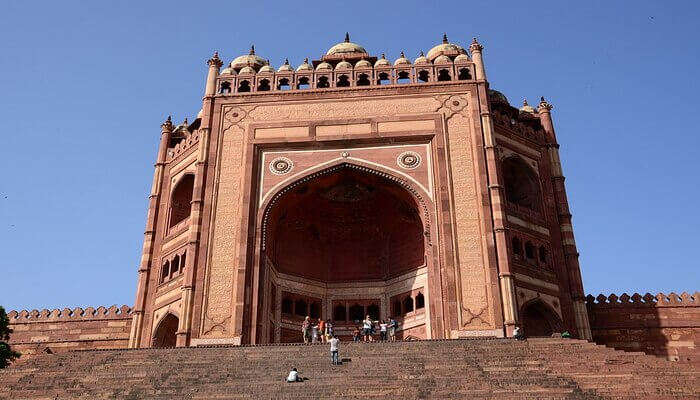 Also called the Gate of Magnificence, the Buland Darwaza is the main entrance to enter the Jama Masjid complex located in Fatehpur Sikri. This gateway was built in the 1576 AD by Emperor Akbar to celebrate his victory over Gujarat. Made of red and buff sandstone, this gate is designed with black and white marble. Rising at a height of 54m tall, this 15 storied gateway is the entrance to the city of Fatehpur Sikri. The most beautiful thing about this gateway is that the pillars and archway is inscribed with Holy Quran and Persian inscription. 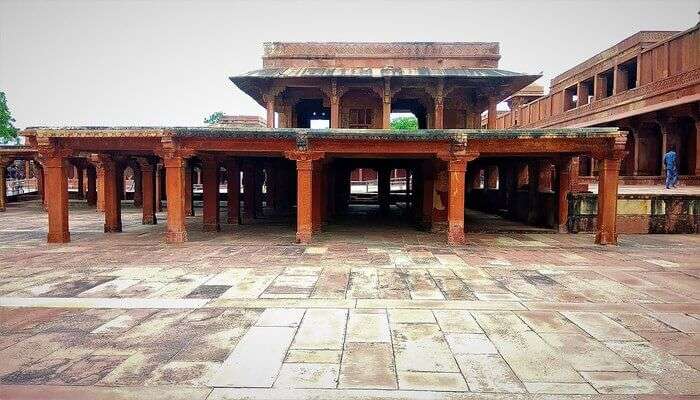 Located at a distance of 100m from the Diwan-I-Am, this museum is situated within a treasury building. This place was in ruins until it was restored during the time between 2002-2004. Inside the museum, there are pre-Mughal and Mughal artefacts which were discovered in Fatehpur Sikri. Alongside that, there are four galleries inside the museum which displays the monolithic stone tools of the pre-historic time. In addition to this, there are Jain sculptures, miniature stone sculptures and figurines which can be witnessed inside the museum.

Suggested Read: After Red Fort & Qutub Minar, Taj Mahal Is Up For Adoption Too! 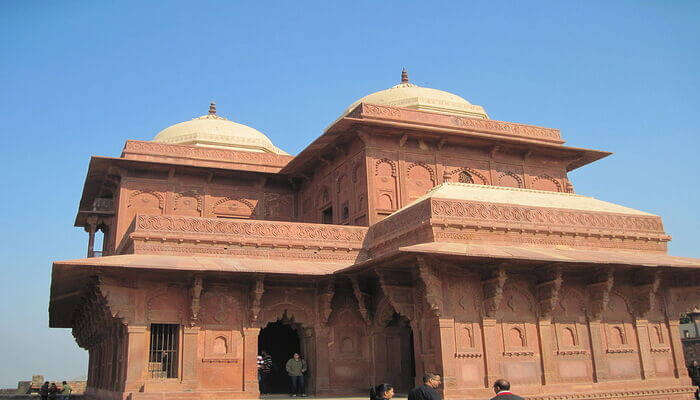 The Birbal palace was built around the time of 1571 which was the official residence of Raja Birbal who was Akbar’s Hindu Prime Minister. This place was a part of the Imperial Harem where Akbar’s senior queens named Ruqayya Begum and Salima Begum resided. This palace is the true depiction of the Mughal architecture which can be witnessed through intricate carvings, surreal jharokhas and also elevated floral patterns.

Suggested Read: Taj Mahal vs Golden Temple: Which One Would You Choose? 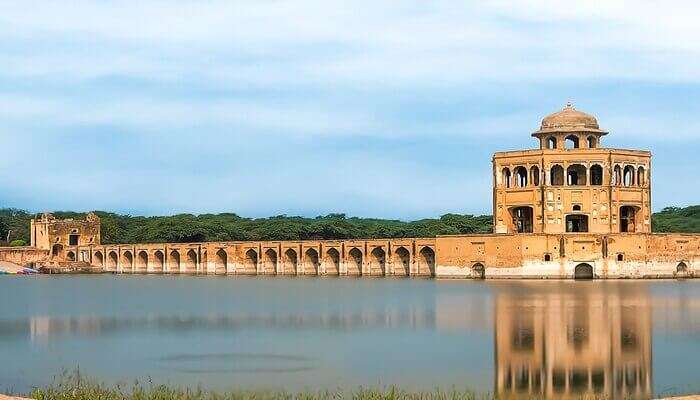 Emperor Akbar built this minar in the memory of his beloved elephant named, Hiran. The minar was seen as a milepost and also a lighthouse which helped the people walk at ease after the dark. This minar is standing tall at a height of 21.34 m tall in an octagonal shape from the ground level. And on the other side, the remaining portion of the tower is circular. There are also alternatively hexagons designed in the minar and six-point stars. During the Akbar’s reign, this tower was actually a watchtower where the womenfolk used to stand and watch sports, wrestling games and animal fights.

Suggested Read: Agra Fort: A Complete Guide To The Marvellous And Historic Monument 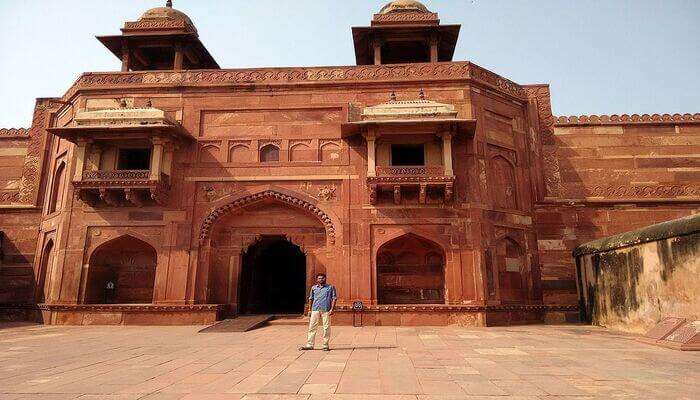 Jodha Bai Palace is located inside the Fatehpur Sikri’s complex and considered to be the largest buildings within the boundary. This monument was built by Akbar for his beloved wife Jodha who was a Rajput princess. The palace is different from all the other architectures inside the complex. The architecture of this place reflects the beautiful Hindu and Muslim design patterns. Inside the architecture, there are motifs of hams parrot and the lotus ghant mala. 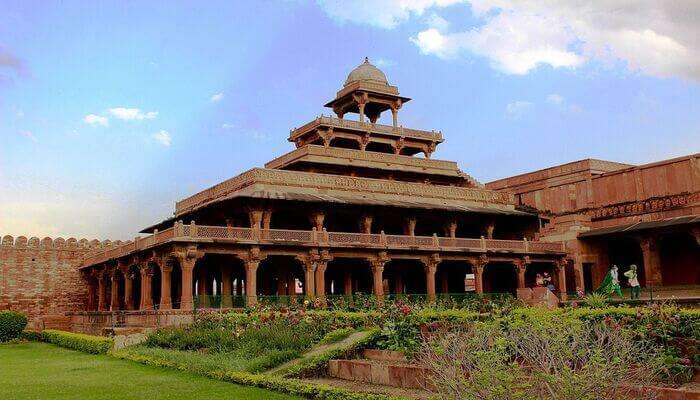 The Panch Mahal is one of the famous places to visit in Fatehpur Sikri which holds the intricate beauty of the Mughal architecture. This five-storey monument was built by Emperor Akbar and used to be an ideal summer getaway for the women of the royal family. Also called the wind tower, the Panch Mahal is made of red sandstone which has around five pavilions adjoined by the staircases. The pillars showcase the carvings of Persian, Hindu and Jain elements which are worth a sight.

Further Read: Top 20 Things To Do In Agra To Explore The True Beauty Of Home Of Taj

While Taj Mahal steals all the attention, Fatehpur Sikri has its own charm. The city which was made by Mughal emperor Akbar in the present day holds a lot of significance. From the ancient structures to the palaces which were once the getaways for the royal family, there is a lot to explore. So if you’re planning to visit Agra anytime soon, make sure to take a trip to Fatehpur Sikri and witness the beautiful architectures and carvings of the Mughal era.

Frequently Asked Questions about Places to Visit in Fatehpur Sikri

What time does Fatehpur Sikri open?

Fatehpur Sikri is open for visitors from 6:00 am to 7:30 pm and you can complete the tour in an hour. Furthermore, the place is open seven days a week, and also on public holidays.

Is there any ticket for Fatehpur Sikri?

The entry ticket for Fatehpur Sikri is INR 35. Additionally, entry is free for children under 15. However, the ticket price for foreigners is INR 550.

Can I visit Fatehpur Sikri during the current Covid situation?

Yes, you can plan a visit to Fatehpur Sikri during the current Covid situation. However, make sure that you are completely vaccinated and always carry your vaccination certificate. Besides this, you need to follow government protocols that include wearing a mask when in public, sanitizing hands at certain intervals, and maintaining social distance.

What is Fatehpur Sikri known for?

Fatehpur Sikri emerged as the capital of Mughals till 1585 after which the empire was shifted to Agra. Emperor Akbar built this fort-like structure in honour of the Sufi Saint Salim Chishti. At the present, it is one of the best preserved Mughal Architecture of India.

What are the must-visit attractions to visit in Fatehpur Sikri?

Some of the famous places to visit in Fatehpur Sikri are Jodha Bai Palace, Jama Masjid, Buland Darwaza and Panch Mahal.

What is the distance between Agra and Fatehpur Sikri?

Agra is located at a distance of 36.2 km from Fatehpur Sikri and it takes around 43 minutes to reach.

Which are some of the best places to visit near Fatehpur Sikri?

When is the best time to visit Fatehpur Sikri?

The months between October to March are touted as the best months to witness the glory of Fatehpur Sikri.