Places To Visit In Nagaur: Explore These 6 Historical Attractions To Learn About Their Glorious Past! 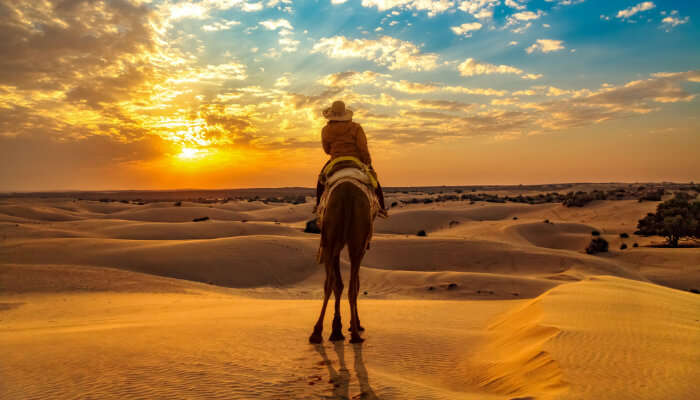 Resting between the two most beautiful towns of Jodhpur and Bikaner, Nagaur is a small town where the time seems still. With the spicy red chilly markets and the cattle fair which is hosted annually, there is a lot to do around here in this town. Despite being a small region, this town still holds the reminiscents of the past in the form of the ancient architectures. Established by the Naga Kshatriyas, this old city was founded in the 12th century and in the present day it is just an old town to visit. Just so that people don’t get confused about where to go here, these are 6 best places to visit in Nagaur which every traveler must add in their list.

6 Best Places To Visit In Nagaur

These are the best places to visit in Nagaur which one must visit to enjoy the beauty of the ancient architectures.

Holding an ancient charm, Nagaur Fort is one of the must-visit tourist places in Nagaur. Known as the epitome of wars in the earlier times, its historical architecture makes it one of the significant places in the state. The fort was built around the 4th century by the Nagavanshis and later it was re-established by Ghaznivities in the 12th century. The fort features a number of mahals situated within the Nagaur Fort where people can witness the intricate work of the walls and the luring view of the marvellous beauty.

Must Read: Nagaur Fort: Get Engrossed With The Beauty Of This Architecture In Rajasthan

The Tarkeen Dargah is located within the walls of the Nagaur fort and is one of the significant sites for the Muslim clan followed by the Ajmer-e-Sharif Dargah. This is considered as one of the important attractions in the list of places to visit in Nagaur. The Dargah is highly revered and was built in the remembrance of Khwaja Hamiduddin Nagauri who was one of the trusted people for Khwaja Moinuddin Chisti. While visiting Nagaur, make sure to not miss out on this place which still holds a prominent charm.

Built-in the honour of Amar Singh who was a renowned Rajput folk idol, this yellow stonework cenotaph still stands in Nagaur city. Boasting the beautiful flower-patterned designs which are carved at the cenotaph and alongside that, there is stonework done on the monuments. The jewelled monuments were dedicated to his wife who passed away before him and also for his three queens who sacrificed their lives to honour the sati ritual.

Suggested Read: Honeymoon In Rajasthan: 6 Things To Do And Attractions For Couple

Just as you enter this temple, one can witness the magnificent glory of the Jain temple which has a glass statue within the premises. This temple is one of the famous places to visit in Nagaur which is known for its extraordinary architecture. The artistic craftwork portrays the incredible work of old-age works created by Jain Holy Scriptures. And on top of that, there is a marble art which beautifies the place. This place is an ideal attraction to witness the idols of Jain Lord Mahavira and the other revered 23 Jain Tirthankaras.

Suggested Read: Monsoon In Jaipur 2022: A Guide To Explore The Pink City Of Rajasthan!

Nagaur Fort is also home to the famous Deepak Mahal which is located within its boundaries and offers a stunning view to capture when in the town. The walls of the fort are ornamented and boast an exclusive style which is mainly flower patterned. Adorned by the marvellous structural beauty, this place is a must-visit for the people who love to explore the ancient royal palaces. The well-designed walls and the paintings on it adds an edge to this ancient palace and makes it one of the major highlights to see inside Nagaur fort.

Suggested Read: 10 Haunted Places In Rajasthan That Will Scare The Daylights Out Of You In 2022

The Akbari Mahal is the symbol of reminiscence which was built in the year 1556 as a memory of re-conquering of the Nagaur city by the Mughals from the Ajmer governor. This palace is located inside the Nagaur fort and boasts the magnificent architecture which is a reflection of the Mughal and Rajput art. The main highlight of the palace is the interiors which are decorated by the embellished glass and mirror work and locally called the Sheesh Mahal. In the present time, the palace is in shackles, but efforts are made by the local government to restore this beauty in its original state.

Further Read: 20 Best Palaces In Rajasthan That Tell Stories Of Past Glory

These are the best attractions to visit in Nagaur which cannot be missed while visiting this city. Reflecting the history and colorful culture of the Rajasthan, this little town has some of the amazing places where you will get that Rajputana feels. If you’re planning a vacation in Rajasthan, then make sure to add this town in your bucket list and enjoy a trip exploring these historical heritages.

Frequently Asked Questions About Places To Visit In Nagaur

How many villages are there in Nagaur district?

When was Nagaur fort built?

Nagaur fort was built in the early12th century and was later altered several times in during the subsequent centuries owing to several battles that happened there.

Can I visit Nagaur during the current Covid situation?

Yes, you can now plan a visit to Nagaur. To ensure a safe trip, adhere to the Government protocols, maintain required social distance, keep wearing a mask when in public, and keep sanitizing your hands at certain intervals.

How one can re-live historical memories in Nagaur?

Nagaur is a place for its tempting cultural practices and ancient historical structures. There are some really amazing places to visit in Nagaur that were built over the years preserving the history of Nagaur like district fair, various ancient monuments, and many more tourist spots.

What are some historical attractions in Nagaur?

What is so alluring about Nagaur?

Nagaur is located in between the two amazingly beautiful towns named as jodhpur and Bikaner. It is widely popular for its red chilly market, cattle fairs and many historical places that have ancient reminiscents.

How one can witness the ancient architecture in Nagaur?

One can visit any of the historical places to witness the ancient architecture in Nagaur. It is filled with various such places where you can spend your vacations.

How many historical sites are there in Nagaur?

There are more than 8 historical sites in Nagaur. All these sites have preserved history and will take you on a tour of the era bygone.

Where is Tarkeen Dargah located?

Tarkeen dargah is situated inside the dividers of the Nagaur fortress and is one of the critical locales for the Muslim group pursued by the Ajmer-e-Sharif Dargah.

Is there any monument located at Nagaur which has stonework?

Amar Singh’s cenotaph has stonework which was made in the respect of Amar Singh who was an eminent Rajput society symbol, this yellow stonework cenotaph still stands in Nagaur city. The jeweled landmarks were devoted to his significant other who passed away before him and furthermore for his three sovereigns who relinquished their lives to respect the Sati custom.

What is special about Jain Glass Temple?

Jain Glass Temple is a grand temple comprised of glass. It is a pleasant design spot and great to see.