Trip To Bhutan: A Picture Perfect Country Of Peace And Power 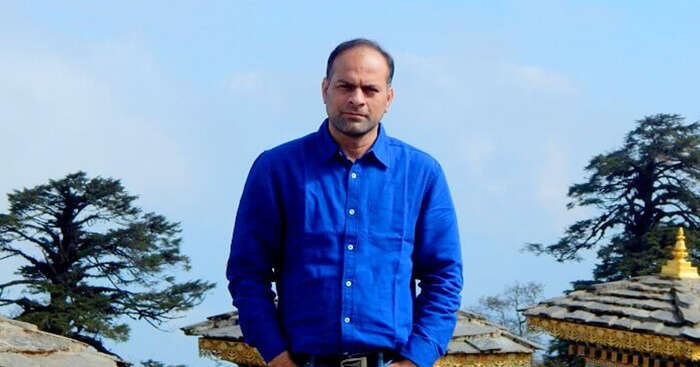 Pragati Kumar talks about his 5 N/ 6 D family trip (4 adults, 2 children) to the peaceful and happy Himalayan country – Bhutan. He booked his package through TravelTriangle and it included his Hotels and Transfers, all for a cost of INR 57,850. He shares his incredible story with us.


Ever since we were kids, we knew Bhutan as ‘the land of thunderbolts’ and were always curious about this mountainous landlocked kingdom. So when we discussed the idea of visiting the place within the family, everyone was more than excited to go there.

The responsibility of booking an ideal package for our holiday was on me. I then searched the Internet for land packages and found some reasonable quotes for the trip on ‘TravelTriangle’. Although, I had never heard of TravelTriangle before, on connecting with them, I found the representatives to be warm and helpful. It turned out to be a great website for tailor-made packages. I eventually booked a 5 N/6D trip from Woodstock Travels via TravelTriangle.

We reached New Jalpaiguri Railway Station and were picked up for Phuentsholing by the driver arranged by our travel agent. The ride from New Jalpaiguri to the Park Hotel (Phuentsholing) was serene and nice and we saw many lush green tea gardens of Alipur Duar on the way. Phuentsholing was a border town of Bhutan and is much cleaner, less polluted, and less noisy than its Indian counterpart. In the evening, we roamed around in the local market and visited the Zangtho Pelri Lhakhang (temple) situated in the centre of the city – also said to be the place of guru Rinpoche.

Suggested Read: 9 Compelling Reasons To Plan A Trip To Bhutan While Autumn Lasts

After our permits were made at the immigration office, we left for Thimphu with the local driver-cum-guide Mr. Ugyen Tshering. He drove us through the picturesque Paro-Thimphu river valley and we witnessed the green mountains as we crossed Gaedu (Tala) and Chukha. During the drive, we had stopped at the Gaedu College of Business Studies, and later in Chukha so as to listen to the roar that came from the gigantic Chukha Hydel Project. Back on the road to Thimphu, we also saw many barren mountains and that immediately reminded us of its nickname ‘the land of thunderbolts’. After about 8 hours of strenuous but a memorable journey, we finally reached Thimphu and checked in at our hotel ‘Hotel Amodhara’.

This day after the breakfast, we started with the ‘National Memorial Chorten’, a stupa built in the memory of the third king of Bhutan. There was a religious ceremony happening that day and we saw all the head monks with their disciples from various parts of the country. The stupa was decorated with colourful flags that had hymns and sermons written over them. The chanting of hymns by monks generated spiritual feeling in us and everything felt magical.

Mr. Tshering, then drove us to ‘Kuensel Phodrang’ to see the world’s tallest statue of Lord Buddha (51 meters). This huge beautiful statue overlooked the Thimphu city and gave us a good overview of the capital.

Next was the ‘Takin reserve’, where we saw the national animal of Bhutan – Takin (said to be a cross breed of deer and goat).

After having a simple vegetarian lunch, we headed for ‘Tashi Chho Dzong’, seat of religious head and the king.

We also visited the National assembly hall, King’s Secretariat, King’s Palace, Supreme Court and also the SAARC building situated around the Dzong. This beautiful place was the centre of power in the kingdom and was both calm and serene. The majestic river ‘Thimphu Chhu’ complimented it perfectly.

In the evening, we went to the local handicraft market (a series of huts stretched over a kilometre, starting from our hotel and leading to the city markets) and it was an interesting experience there. We also enjoyed the musical evening and the dance performances in the open theatre. All of which, being part of the week-long festivities to celebrate the birthday of its 4th king. This day turned out to be a pleasant and a memorable one.

The Dochula pass is on the way to Punakha, which is the winter seat of the religious head of the country. Dochula pass gave us a panoramic view of mighty mountain ranges and although it was foggy, the place with its 108 small Chorten (stupa memorials) had a picturesque tranquil feel to it.

We then drove for about 2-3 hours to reach Paro. On the way, we crossed the confluence of Thimphu and Paro River at Chhuzom and spent some time there amidst the tinkling sound of the two streams.

In Paro, we visited the Kyichu Lakhang, one of the oldest temples in Bhutan (built in 8th century), the beautiful Paro airport on the banks of Aro Chhu, ruins of the oldest Dzong – Drukgyal Dzong (also from 8th century), and finally the Rinpung Dzong; administrative and religious centre of the region. It housed the National Museum of Bhutan which incidentally also overlooked the city and Paro River. We were then dropped at the Dewachen Resorts, away from the city and all its hassles.

Suggested Read: A Perfect Blend Of Adventure & Bliss, Our Romantic Trip To Bhutan Was A Dream Come True

Chelela peak is the highest point (3899 meters) on the ‘DANTAK project’ roads (maintained by BRO, India). It has motorable, as well as a trekking path from Paro. The serenity of the place mesmerized us and after seeing the snow-capped mountains, all of us were left awestruck.

Later, we returned to the Paro city and went to its markets in the evening. We saw a lot of shops there on both sides of the clean paved roads selling souvenirs and handicraft items. It was a nice experience and we were really impressed by the way everything in the markets was organized and managed.

We left Paro in the morning on the 6th day with great memories and beautiful moments to cherish forever. On our way back, we again visited the meandering paths to Phuentsholing before being finally dropped to New Jalpaiguri Railway Station to take the train back home.

Bhutan turned out to be a mesmerizing experience for all. The serenity, calmness, and the peaceful ambience of the place was soothing to the soul, and given an opportunity, I would want to visit this beautiful country and its happy people again.

Suggested Read: A Trip To Bhutan With Friends: The First Chapter In My Travel Diary, Many More To Come!

Low Points – Car rides on the mountains were sometimes strenuous and long.

Tips to future travelers – One of the most peaceful destinations in the world, go there with all your heart and you will not be disappointed. Take extra precautions in case you have a history with mountain sickness.

Further Read: Reasons Why You Lose A Lifetime Travel Experience If You Miss Out Bhutan

With so much to treat the travelers’ souls, Bhutan never ceases to impress its visitors. The beautiful views, stunning temples and fortresses, drool-worthy Bhutanese cuisine, and vibrancy coupled with a serene vibe are sure to make one feel completely spellbind. Witness the magnificence of Bhutan! Plan a trip to Bhutan with TravelTriangle!

15 Best Resorts In India For Family Vacations With Your Kids