15 Vibrant And Colorful Festivals In Bhutan One Must Witness In 2021! 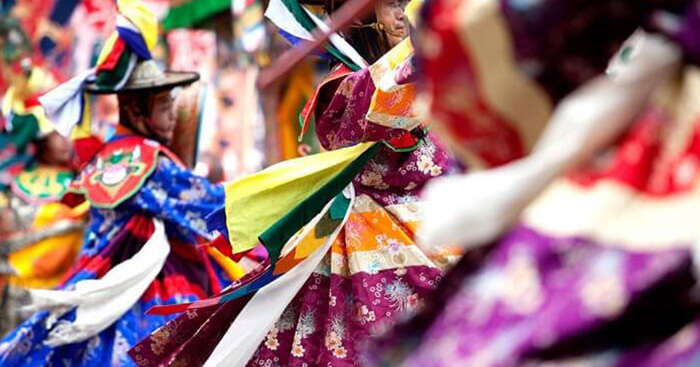 Festivals in Bhutan are known for their richness, vibrancy and happiness. The ancient expressions of Buddhist culture and legendary victories are re-enacted and celebrated around the country with such pomp and show that it attracts visitors and tourists from around the globe.

Most of these festivals are dedicated to Guru Rimpoche – the saint who introduced Bhutan to Buddhism in the early 8th Century. The mystical dances, engaging performances, brave fire events, mysterious naked dances, enlightening re-creations and such comprise the festive celebrations. Sometimes there are rare displays of silk paintings and/or some ancient scrolls. The festivals in Bhutan never let you off the high. For a quick peek, join us on a virtual tour to 15 major festivals in Bhutan 2021.

Here are some of the best festivals in Bhutan which one must definitely experience when they plan a vacation to the happiest country in the world.

Thimphu Tshechu is the biggest and the most popular festival of Bhutan. This is also called the national festival of Bhutan where thousands of people flock down, all decked up in fine colorful attires to be a part of the festivities. There are colors, there are dance performances, there are activities, and there are plays in this Bhutan festival in 2021. However, the colorful mask dances, where people and monks dance their heart out to celebrate life and cheeriness of Bhutan, steal the show.

When: 10th Day of 8th month of Lunar Calendar

Suggested Read: 9 Compelling Reasons To Plan A Trip To Bhutan While Autumn Lasts

Naked dancing, fire dancing, mask dancing – Jambay Lhakhang Drup has it all. One of the main festival of Bhutan, there are traditional dances are performed to celebrate the foundation of Jambay Lhakhang Monastery and to honor Guru Rimpoche. Mewang – the fire ceremony, attracts thousands of tourists and features locals dancing under a flaming structure made of dry grass. Meanwhile, the event highlight is ‘Dance of Treasure’ – Tercham, where masked dancers and monks perform naked. This part of the festivities take place in the middle of the night.

When: Since this one of major Bhutan festivals, is celebrated according to the Lunar Calendar, it can fall anytime during October – November.

The region of Wangdue Phodrang, central Bhutan, is famous for its ornamental speeches and songs known as Lozeys. The annual festival was introduced after the completion of Dzong, which is a fortress, in 1639. It is one such Bhutan festival, where locals and thousands of tourists come together to revel in the festivities and to celebrate life and merriment. The ‘Dance of Ox’ is also a major attraction, where people dance to ensure a peaceful afterlife. The festival is concluded with the unfurling of a gigantic scroll of various paintings, known as Guru Tshengye Thongdrol.

When: Since this one of major Bhutan festivals, is celebrated according to the Lunar Calendar, it can fall anytime during October – November.

Out of all the festivals in Bhutan, Punakha Drubchen is most unique. It is about recreation of some consequential scenes and moments from the Tibetan Army battle of 17th Century. The local military officials recreate and re-enact the scenes dressed in full battle gear complete with swords. It is to celebrate the victory and to pay tribute to the villagers who came forward to drive out the Tibetan army out of their country. It shows gratitude to these people because of whom, Tibet was unable to take over Bhutan.

Another major Bhutanese festival, Punakha Tshechu follows immediately, which is known for its colorful dance performances and cheerful environment.

When: February or March is usually the month when this popular Bhutanese festival is celebrated.

This is one of the most famous festival of Bhutan is Paro Tshechu. Monks and laymen dress up in vibrant multicolored brocade costumes. They mingle, they dance, they enjoy and they celebrate. Monks, wearing masks which represent the deities, re-enact and replay the scenes from legendary tales and historical anecdotes. However, the showstopper of the festival is the moment when people get the much awaited glimpse of 350 years old Thangkha, which is one of the oldest Buddhist religious scrolls. It has narratives from history, celebrating the high deeds of Guru Rimpoche. The reason why Paro festivals in Bhutan are known to be the most visited ones around the country, is its hospitality and connectivity.

When: It is the most popular spring festival of Bhutan, and takes place in the months of March or April.

One of the newly found festivals celebrated in Bhutan is Haa Summer Festival. Locals and tourists come together to celebrate the culture, heritage, religion and sports of Bhutan. The festival is mainly dedicated to the nomads of Haa Valley. Some of the most consequential moments and cultures of these nomads are showcased during this festival in the form of vibrant pictures and lively paintings. The best part is that even tourists can participate in some of the fun activities like yak riding, folk dance, and food tasting

When: This Bhutan festival is usually celebrated in July, every year, since 2012.

When: In the month of August

Suggested Read: 10 Invigorating Adventure Sports In Bhutan You Must Try In 2021

The Jomolhari Mountain festival is a festival which happens for around 2 days and considered to be one of the exquisite events to be witnessed. This is one of the famous Bhutan festivals in 2021 which one must visit. There are magnificent theme to rejoice and locals add life to the entire celebration. The festival takes place at the foothills of the heels of Mt. Jomolhari. This festival also includes a snow leopard show which aims in spreading awareness on the declining number of snow leopards.

Location: At the base of Jamohhar Mountain
Timing: In the daytime

Bhutan is known for its vibrant festivals, and Nimalung festival stands to be one of them. This festival is celebrated with much zeal and there are traditional folk dances and other performances done by the locals. Alongside that there is a mask dance which is indeed the highlight of the place. Alongside that there one can see the locals beseech the gods to seek their blessings and get away from the misfortunes.

Location: Chumey located in Bumthang
Timing: In the daytime

The Nomad festival is an annual celebration which takes place in Bumthang which is less than 10 hrs drive from Thimphu. During this time, the nomadic people come from all parts of Bhutan, especially from the North West and North East Himalayas who dominated the festival with their presence. The festival livens up with traditional dances, colorful outfits which is enhanced by the surreal and lush-green surroundings.

The Sakteng Festival is an annual celebration which happens the Sakteng Valley located at an altitude of 3000 meters. This valley is located at the eastern side of Bhutan and the semi nomads named the Brokpas reside here. Quite an excluded place, this valley has still not been touched by the modernity. But this festival is worth experiencing which happens for around 3 days almost next to the village grounds.

Highlights: Yak Dance and Ache Lhamo
When: In the month of June

The Takin festival takes place at Jigme Dorji National Park located at Gasa Dzongkhag. This is considered to be one of the most famous festivals in Bhutan and gives a sight of the national animal of Bhutan which is a rare sight. Alongside that there are other things like trekking and hot spring baths which makes this festival more special.

Highlights: Performance of Bhutan Takin up close
When: In the month of February

Ura Yakchoe is a famous dance performance which is performed at the Ura Valley in Bumthang. During this festival, the traditional dance is performed alongside the popular folk dances which is a symbol of a sacred relic. This festival holds a major importance among the locals and a large number of devotees come to seek blessings and worship the relic.

When: In the month of April

Suggested Read: 12 Charming Monasteries In Bhutan Every Traveler Must Explore

This is an annual festival which was introduced by the Zhaddrung Ngawang Namgyal right after the Dzong was completed. According to history, the dzong was served as an administrative centre which was built in 1639. The Wangduephodrang Tshechu is a 3 day festival which was organized and attended by the natives of Thimphu and Punakha as it is considered to be quite famous Thimphu festivals.

When: In the month of June

This festival is quite a fascinating one which is quite evident by its name, but it holds quite popularity among the locals. Celebrated at the Gangtey Gompa courtyard located in the Phobjikha Valley, this festival is used as a medium to pass on a message to mankind. The motive of this festival is to create awareness on creating and protecting the endangered black necked cranes.

When: In the month of November

Enchanting and welcoming, aren’t they? Which one called you the most? These festivals in Bhutan portray the beautiful culture and tradition of the country. These festivities bring out the best of the country’s rich heritage which every traveler must experience atleast once. So now when you plan a vacation to Bhutan make sure to be a part of one of these extravagant celebrations.

Q. Why do we celebrate Tshechu in Bhutan?

A. The Tsechu or the Mask dance festival is celebrated to honour Guru Rinpoche “the lotus born teacher”, who introduced the tantric Buddhism in Bhutan during the 8th century.

Q. What is the dance of Bhutan?

A. The Cham Dance is the traditional dance of Bhutan which is done by using masks. This dance is performed by the monks and laymen wearing colorful costumes.

Q. What is the culture of Bhutan?

A. The culture of Bhutan is based on the Tibetan form of Mahayana Buddhism.

Q. What is Paro tshechu?

A. The Paro Tshechu is one of the famous dance festivals in Bhutan.

Q. What is Thimphu tshechu?

A. This is one of the biggest festivals celebrated in Bhutan for three days. Beginning on the 10th day of the 8th month of Lunar Calendar, this festival precedes by prayers day and night along with rituals to invoke gods.

Q. What is Bhutan known for?

A. Bhutan is a country which is famous for its gross national happiness, natural beauty, forest conservation and rich culture and heritage.

Q. Does Bhutan require a passport?

A. The Indian nationals are required to carry a valid Indian passport with a validity of 6 months and necessary documents which includes voter id card or Aadhar card. No VISA is required to visit Bhutan.

12 Thrilling Adventure Sports In Pune And Around In 2021

20 Hill Stations Near Chennai In 2021 That Will Leave You Loving Summer Forever!