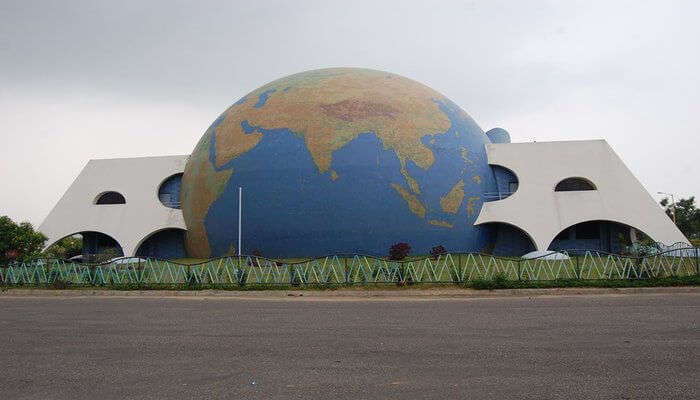 An emblem of Punjab, Pushpa Gujral Science City is an institution of fun and learning dedicated after the mother of late, I. K. Gujral, the 12th Prime Minister of India. Located midway Kapurthala and Jalandhar, the Science City sprawls in an area of 72 acres where you will find a fusion of modern, scientific temper in the agricultural background. If you have forgotten everything that you read in textbooks in your school, then a visit to the Science City in Kapurthala will be a fun reminder of all those things. Not just that, you will get simulation and visual experiences to take the thrill and fun up a notch.

One of the top tourist attractions in Kapurthala, Science City is open 365 days throughout the year. It is open from 9 AM till 5 PM in the evening. If you are planning a school trip to the Science City, then you should know that there are hostels and dorms available for students and teachers. However, you have to request in advance to the administration to make arrangements for you.

Visit Rangla Punjab In Jalandhar To Relish The Culture Of Punjab

There are three different packages for the visitors which varies in attractions.

Entry Ticket: It includes Robotic Dinosaurs, Science City Galleries, Exhibits and Rs 20/- food coupon per visitor. For adults and senior citizens, the price is INR 155 and INR 105 for students.

Unravel the mystic secrets and mysteries of space at Science City’s space theatre projected on 23 tilted dome. You will feel like you are floating in space. If you or your kids have a deep interest in space, then you should definitely not miss this on during your visit. Not only will they be entertained but also enlightened with knowledge.

A first of its kind in the country, Climate Change Theatre outlines the serious ill consequences of climate change if no action is taken in time. Whatever Trump says, climate change is real. After you have watched the 25-minute movie, the bubble of ignorance will pop and you will wake up to a new awareness regarding the catastrophe. The movie also teaches how humans can adapt to the changes and do their bit to save the environment.

A visit to the virtual reality gallery in the Science City Jalandhar is educating and interesting. The gallery is made on the concept of cyberspace, virtual reality shadow control, and virtual game stations where you will learn how various equipment work. By the end of the tour, you will learn how an ATM machine work or how email works. Apart from that, you will also find virtual butterflies, magical flowers, virtual sand and many more.

Laser stands for Light Amplification by Stimulated Emission of Radiation. In case you didn’t know that and the various uses of laser in the various fields of science, then you should make the first stop of your tour at Laser theatre. What makes this attraction in the Science City Jalandhar unique is that it one of the only few laser shows you can see in India. So, do not miss this at any cost. It is fascinating and will take you to a wonderland.

Energy Park has been created to make people aware of the new technologies in the field of renewable sources and their various applications. You will also learn about various conservation measures. There is even a solar restaurant on the premises functioning totally on solar energy. Photovoltaic Power Plant, Water Throwing Elephant, Hydel Power Plant, and Solar Plant are other various attraction of Energy Park.

One of the best places to visit in Jalandhar, Pushpa Gujral science city in Kapurthala is located on Jalandhar-Kapurthala Road. While it is 16 km from Kapurthala and takes 23 minutes to reach, it is just 7 km away from Jalandhar and only takes 18 minutes to reach. Here is how you can reach the Science City using various modes of transport.

By Air
The nearest airport is in Amritsar, 80 km away from the Science City. You Can then take a bus or train till Jalandhar or Kapurthala, and then a cab to reach here. You may also take a direct cab from Amritsar.

By Train
Jalandhar is the nearest railhead to the science city, just 17 km away. You can hail a cab or auto from the railway station to reach this attraction. There are a number of trains connecting Jalandhar to various cities in India.

By Road
There are frequent buses running between Kapurthala and Jalandhar that will drop you at the gate of the Science City.

If you are headed on a trip to Punjab, then you should make a point to visit Pushpa Gujral Science City. It is a great place to bring your kids where they can have fun as well as learn. Even you, along with kids, learn about so many things that you read in your school textbooks but have forgotten now.

Pushpa Gujral Science City is positioned in the Jalandhar district of Punjab state.

When is the Pushpa Gujral Science City closed?

Interestingly, the attraction is open throughout the year from 9:00 am to 6:00 pm. So, travellers can plan their trip anytime they want to.

Which are some attractions to visit near Pushpa Gujral Science City?

What is the price of Science City tickets?

The price of the entry ticket for adults and senior citizens is INR 155 for students, the price is INR 105. There are also various packages available that can range between INR 350-600.

Which are the best restaurants near Pushpa Gujral Science City?

Some of the best restaurants where travellers can grab a meal or two while visiting the attraction are The Great Kabab Factory, Sagar Ratna, Chatter Box, Baba's Veg & Non Veg, The BrewMaster, Vimpis Bar and Restaurant.

Seven Wonders Of India That You Should Visit In 2022

Shopping In Chandigarh: 8 Places To Spend Your Money Without Giving A Second Thought!

Food In Amritsar: 5 Flavorful Dishes That All Foodaholics Must Try In 2022!

5 Best Water Parks In Jalandhar To Escape The Heat This Season Like A Pro!

8 Most Spine-Tingling Things To Do In Punjab For A Fun-Jabi Trip!

Sheesh Mahal In Patiala: An Insight Into The Palace of Mirrors