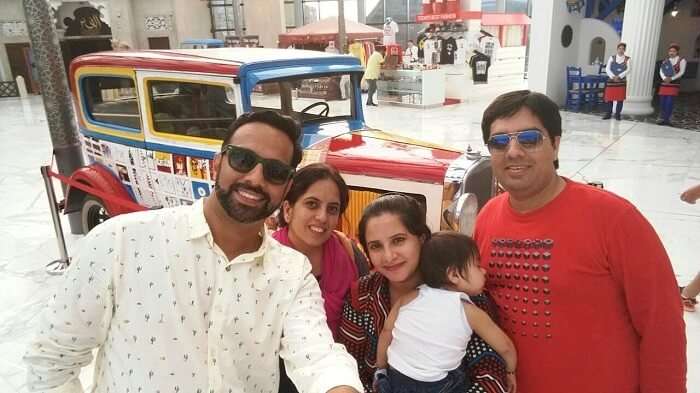 It is a known fact that Dubai never fails to impress anyone and Rahul along with his family experienced the same. To satiate the prolonged wanderlust, Rahul decided to go on a family vacation and thought that what can be better than the sparkling city of Dubai. The rest is his-story so here’s what he wrote.

As a family, we wanted to wrap this year with an unforgettable trip full of fun and memories. We wanted to check Dubai off our bucket list and that is when I started Googling for different packages and came across TravelTriangle.

The representative from TravelTriangle put me through the agent called “Ittiba Holidays” who specialized in Dubai tour packages. We customized an exciting tour package and the best part was that all of it fit in our budget.

Having done all the preparations, it really felt great to have managed everything so easily in few clicks with TravelTriangle. Now that everything was done, we all were filled with great enthusiasm and excitement to go on our international holiday.

Day 1: The Moment Our Eyes Met The Sparkling Lights of Dubai 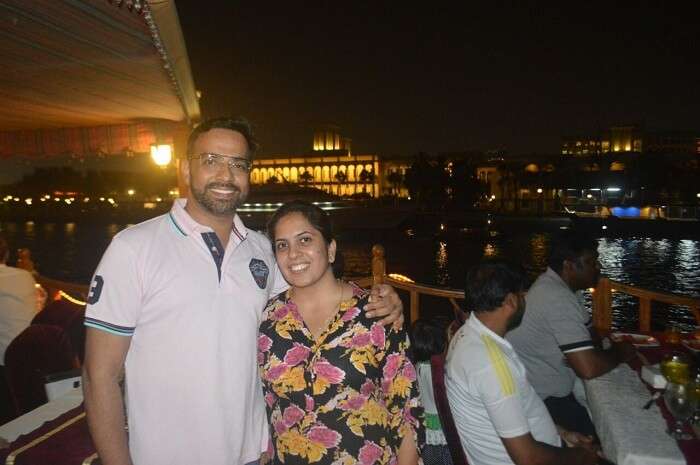 Our departure from Mumbai was really comfortable but there was an unexpected delay at the Dubai airport due to some technical issues. Despite the delay, we were mesmerized the moment we landed and our eyes met the sparkling city of lights.

We reached Dubai at around 10.30 pm in the night and the agent from Ittiba Holidays greeted us at the airport. He transferred us to the hotel and to our surprise, the staff gifted some perfume bottles and offered drinks to us. Post receiving such a warm welcome, we all retired to bed as it had really been a long day.

Day 2: The Advent Of An Adventure-Filled Day 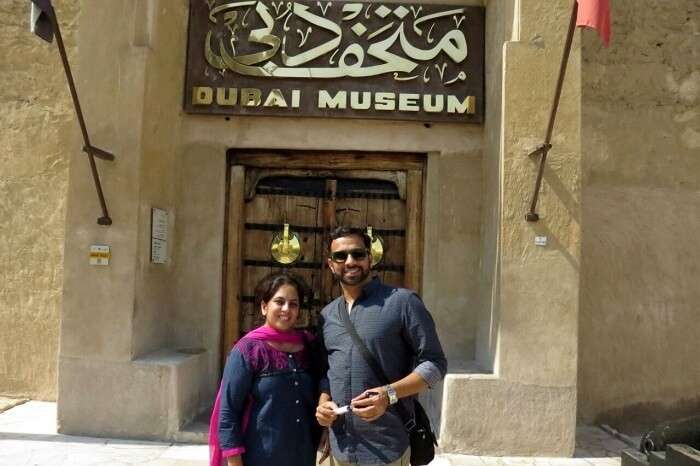 After getting enough sleep we were looking forward to the second day and the surprises that awaited. We started the day a little later and proceeded for the exciting city tour after enjoying a sumptuous breakfast. 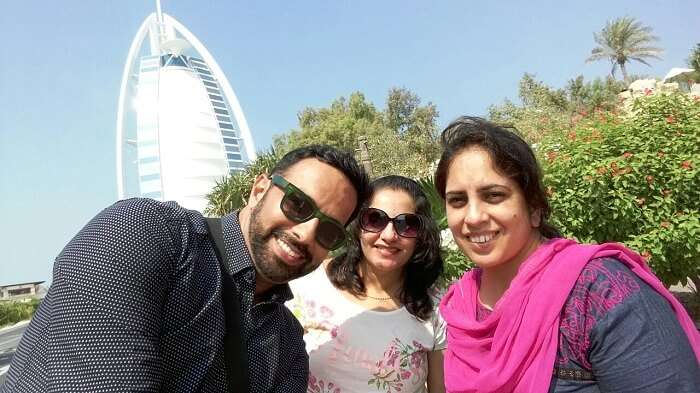 The moment our tour started, we were enthralled by the city’s architecture and the charm of Dubai’s environs. 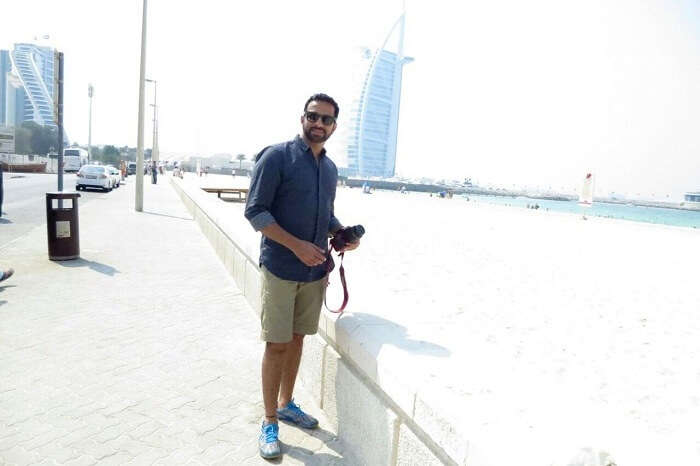 From the rich culture of Dubai Museum to the white sandy shores of Palm Jumeirah beach and captivating Burj-al-Arab, it seemed possible to fall in love at first sight when one is in Dubai. Later in the evening, the Desert Safari turned out to be quite an adventurous event for all of us. Though we paid extra for the ATV bike rides, the quad bike sessions and dune bashing was thrilling to the core. Later in the evening, we dressed up in the traditional costumes and indulged in a typical and entertaining Arabian night experience. 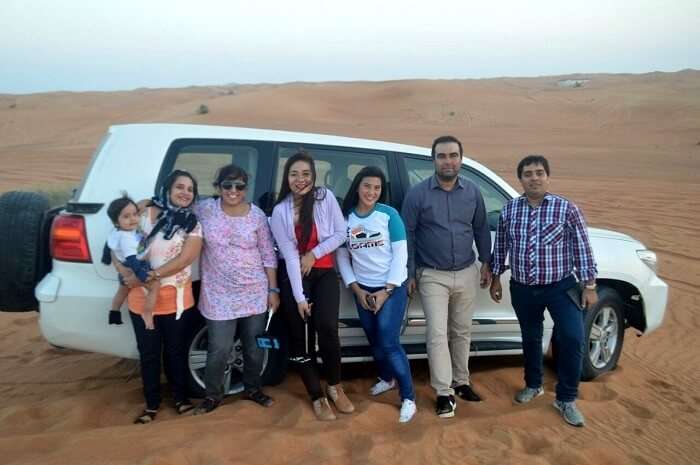 We enjoyed our dinner alongside the belly dance performance and the fire show. On our way back we were dropped at the Dubai Sahara Mall to meet one of our cousins. We enjoyed a bit of our family time together and returned back to the hotel later in the night.

Day 3: The Lost Chambers, Aquaventure And The Dhow Cruise 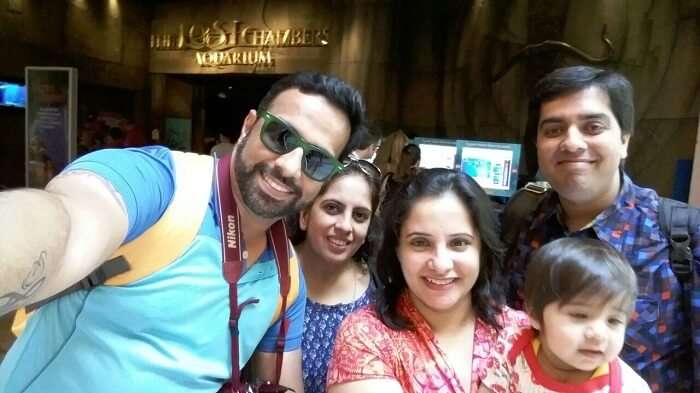 Next day in the first half we visited the Lost Chambers Aquarium which was a fantastic experience. We came across thousands of aquatic species amidst the thematic lighting and the guides made the tour worth it. 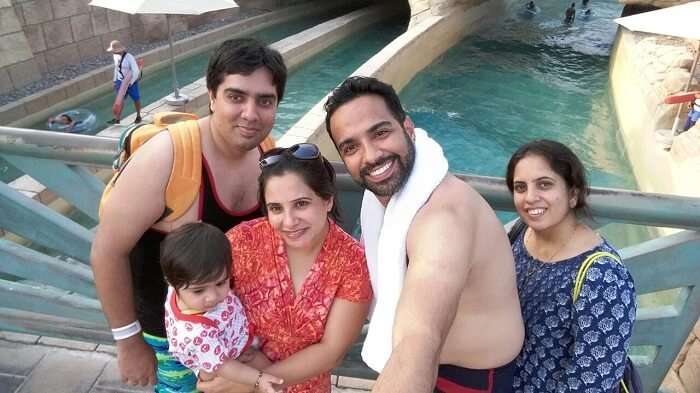 The most fascinating experience we had that day was at Aquaventure in Atlantis the Palm. The near-vertical slide through the water tube and other water rides just left us wanting for more.

Solo Trip To Dubai At 67? You Heard That Right! Sridhar’s Journey Proves That Age Is Just A Number! 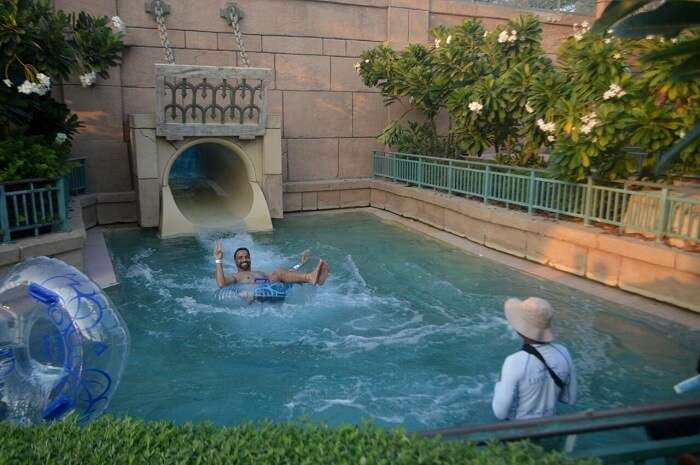 We missed the Dolphin Show as we were so engrossed in our waterpark adventure that we lost track of time and couldn’t reach the bay when we were supposed to. 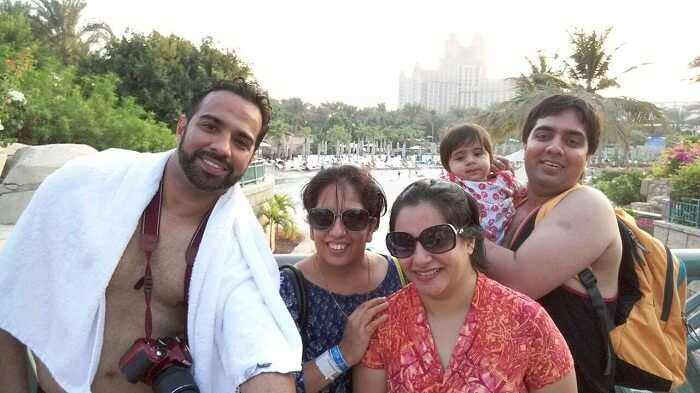 Our evening was booked for the scintillating Dhow Cruise. We went back to the hotel to change and still made it to the cruise 15 minutes before it started. 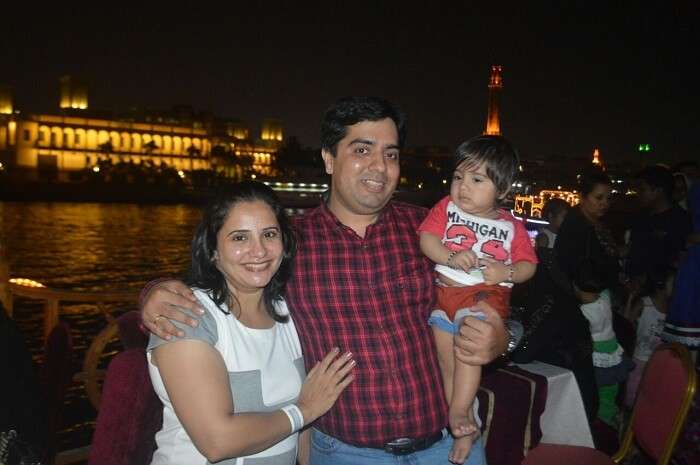 The whole setting was amazing and we cruised through the Dubai creek while indulging in a delicious international buffet. On our way back we were dropped at the mall for some shopping and later took a cab back to the hotel. 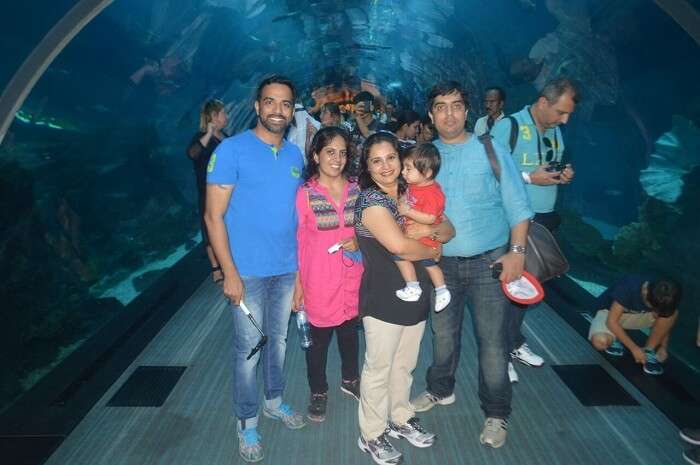 As the previous day was quite fun-filled and adventurous, we relaxed to the core on the fourth day. 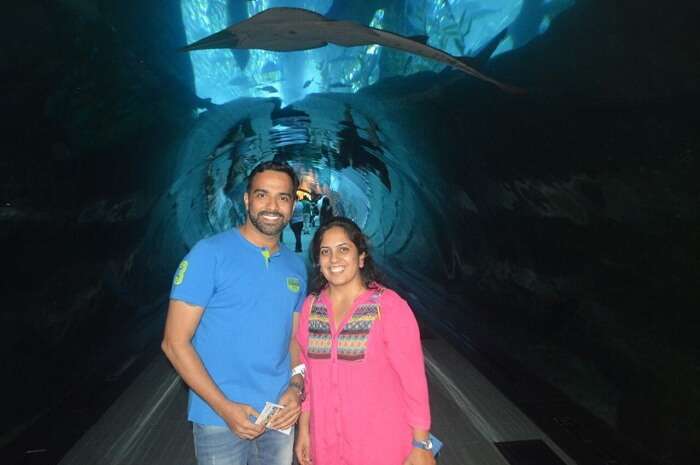 Later on in the afternoon we visited the underground tunnel at the Dubai Aquarium that was very different from Lost Chambers and was fantastic as well. 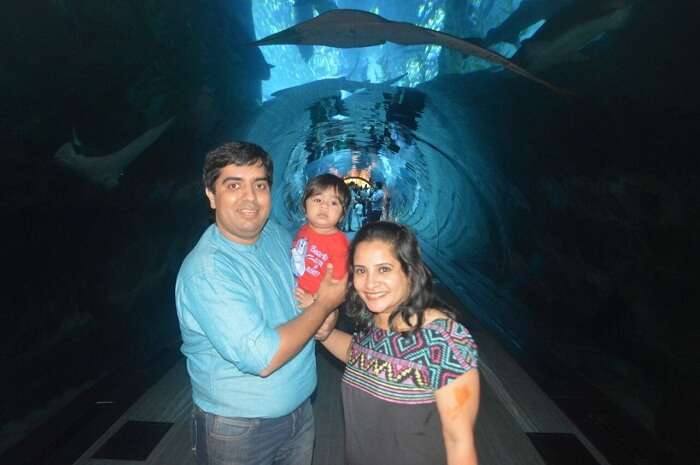 After spending enough time at the Dubai Mall we headed towards the most awaited tour of the Burj Khalifa at about 3.30 pm. Viewing the skyline from 124th floor of Burj Khalifa had all of us awe-struck by the magnificence of this star-lit city. 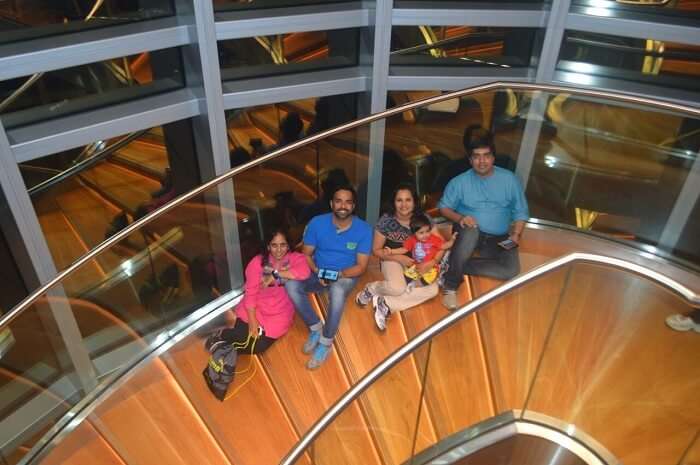 We first went up to the 125th floor and then came down to 124th floor. Following this we cherished the amazing views of the fountain and the whole experience made us wish that we get to go to the 148th floor on our next trip. 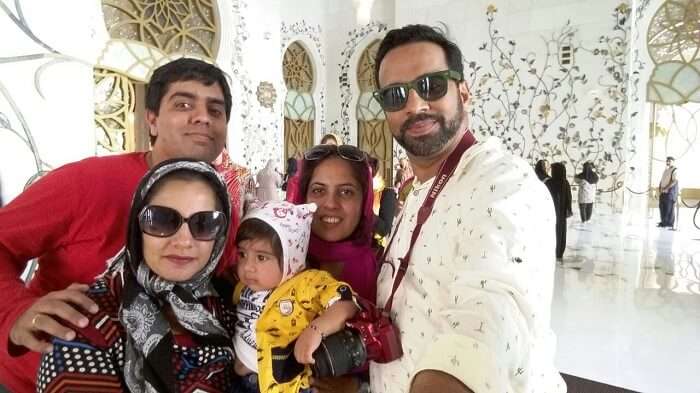 Next morning after breakfast, we geared up for the Abu Dhabi city tour. We visited the Sheikh Zayed Grand Mosque which is world renowned for its great carvings and architecture. The mosque was so magnificent that it took two hours for us to explore it fully. 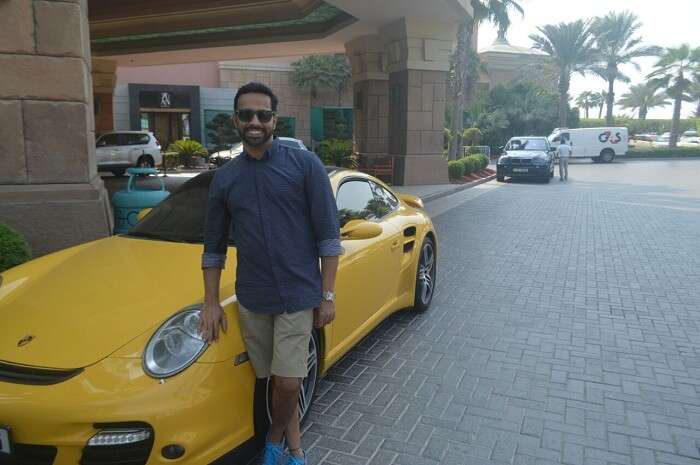 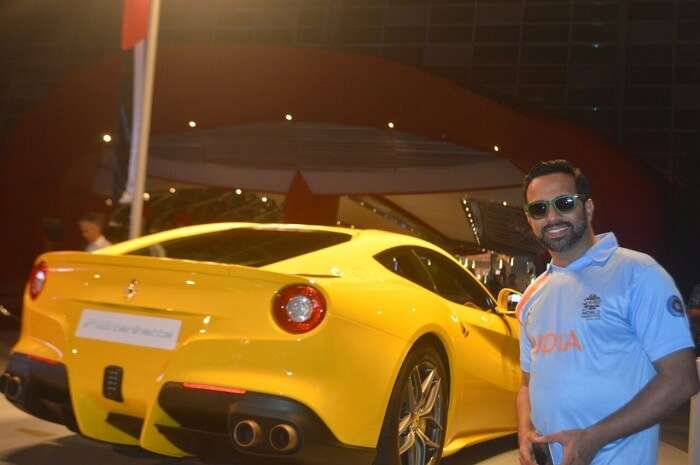 There were lot of other activities but we finished by 8 pm since we had to depart the next day. We later indulged in some shopping at Meena Bazaar and went back to the hotel.

Sun, Sand, & Safari: This Is Why Dubai Was A Perfect Escape For Roshan & His Wife

Day 6: Till We Meet Again 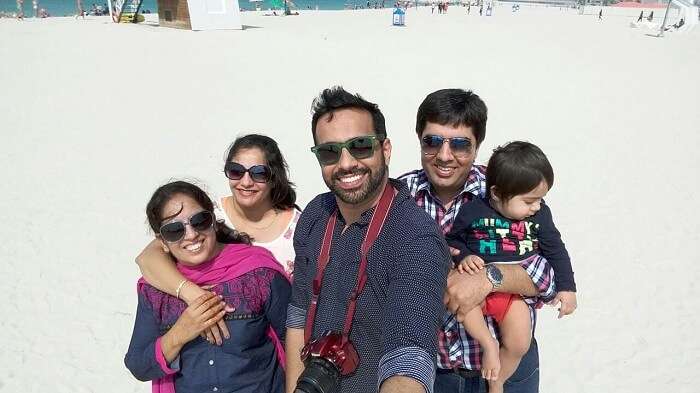 This was the day when our long fun-filled vacation had come to an end. As we finished our breakfast, the last morning in Dubai made all of us a bit nostalgic. We reached the airport right on time and bid a warm farewell to this ever-dazzling city until our next trip.

Wow Moments: Undoubtedly our wow moment was at the 124th floor of Burj khalifa and the fun slides at Aquaventure.

Low Points: There was a bit of lack in communication. There would be no prior or post information once the driver had arrived. We would be waiting for the message to be conveyed only to realize that the driver had been waiting for us. This resulted in wastage of time which could have been avoided.

Be it a memorable honeymoon trip or a relaxed family holiday, Dubai offers the best to its admirers. Explore the star-lit city of lights and book the best Dubai tour packages with TravelTriangle! 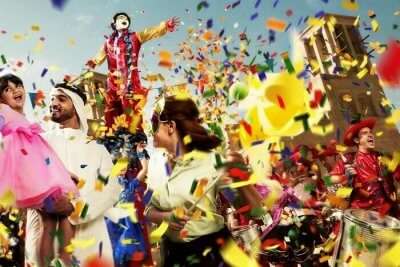 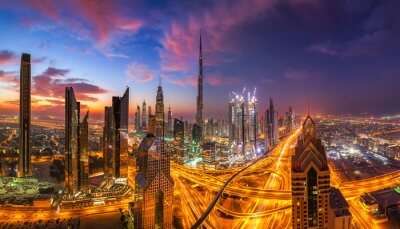 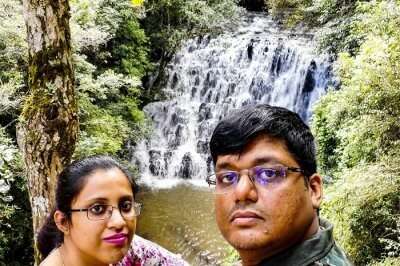