10 Real World Destinations That All Disney Lovers Must Travel To 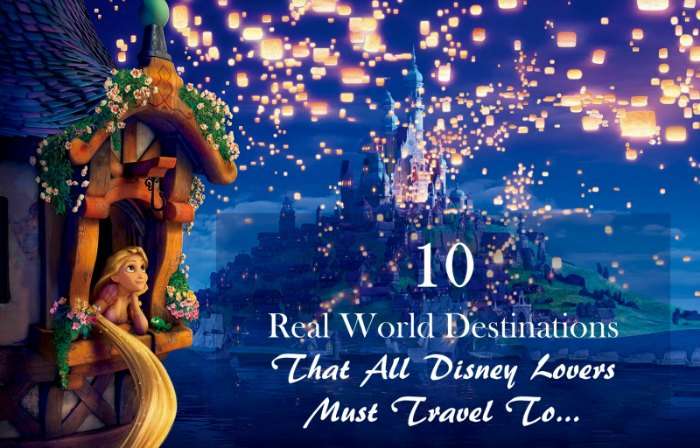 Are Elsa, Snow White and Nemo your favorite characters and you dream of the wondrous world that they inhabit? Sure the places are fictional but many a time they find their inspiration in real life. If you’re a traveler and a Disney fan visit the following beautiful places to find yourself amidst the streets, structures and incredible natural wonders that will transport you to the real version of the fascinating Disney world.

10 Real Destinations That You Can Relate With Disney

We all have had fantasies in our childhood, especially of going to the places that we saw in various Disney movies. But growing up comes with the realization that Disney is not for real. But you can live your fantasies in these 10 real destinations that are very similar to the ones you saw in your favorite Disney movies

Hotel de Glace, Canada
Image Source
If you were inspired by Elsa’s rendition of ‘Let it go’ as she created her ice castle, all you need is an air ticket to Canada to feel the chill. Elsa’s Palace drew its inspiration from the Hotel de Glace near Quebec City in Canada and is made primarily of ice.

Must Read: 11 Rich Wedding Destination Ideas : Which One’s On Your List ?

Taj Mahal, India
Image Source
Aladdin had to take a magic carpet ride to the Sultan’s palace. But you can just fly to Agra to gawk at its inspiration. In Aladdin, the Sultan’s palace is loosely based in look on the famous Taj Mahal in India.

3. Paradise Falls in Up

In Up, Carl Frederikson tied helium balloons to his house to reach the famed Paradise falls. In real life, you can find the inspiration with a trip to Angel Falls in Venezuela, the world’s tallest waterfalls.

Must Read: 10 Waterfalls in India You Need to Explore This Summer

4. Beast’s Castle in Beauty and The Beast

Even though the Beast was trapped in the castle, you couldn’t help but gaze at its beauty in the film Beauty and the Beast. The Beast’s luxurious castle in the popular film got its real life inspiration from the Chateau de Chambord in France, one of the most recognisable châteaux in the world.

Must Read: 9 Best Honeymoon Destinations in Europe In May, June and July

Sleeping Beauty lay asleep inside it for many years waiting for her Prince. See the colourful and majestic inspiration behind the castle in Germany’s famous landmark, the 19th-century Neuschwanstein Castle.

Must Read: 38 Most Colorful Places In India That Will Make Your Heart Skip A Beat

If there was one thing that was the most rememberable about Finding Nemo, it was the bright colors and sights of the ocean as Marlin the clownfish searches for his son. Get mesmerized by the sights you remember in the Great Barrier Reef in Australia, which was the inspiration behind the animated world.

Must Read: The Most Amazing Instances of Scuba Diving in Andaman Islands

7. Pride Rock in The Lion King

Who can forget Simba’s adventures and the beautiful forests in the epic film The Lion King? The art for the film is largely based off of Serengeti plains in Tanzania, famous for it’s incredible animal migrations, the Baobab trees and of course for its lion prides.

Must Read: 10 Reasons why you should spend your next family vacation in East Africa

8. New Orleans in The Princess and The Frog

City Streets in The Princess and the Frog
Image Source

The Princess and the Frog is one of the rare Disney film to actually recreate a real city instead of settling for a fictional town. From the French Quarter to the Bayou, you will see all of New Orleans and the Mississippi River Delta in the film.

Must Read: 18 kickass destinations which greet Indians with a Visa On Arrival. Let’s just Leave

One of the most important scenes of the film Brave is at the stone circle which Merida finds herself in. Brave’s creators travelled far to visit the Callanish Standing Stones in Scotland to find the right inspiration for their film’s look.

Mont Saint-Michel, France
Rapunzel’s palace in the film Tangled was situated on an island. And even though it was inspired from many castles, its main source was the enchanting French commune of Mont Saint-Michel set in Normandy. A major pilgrimage destination in Europe, it is formed on a rocky islet along with many hotels, restaurants, and boutiques for tourists.

11. Mistery Spot – Can You Identify This?

This is of course few of the many beautiful locations across the globe that you can visit to fulfill your craving for Disney inspired adventure.

With so many more places left, tell us which is your favourite Disney film whose real-life counterpart you really want to see. We are listening!

Reservations Now Open: The World’s First Luxury Space Hotel Is All Set To Welcome You!

Experience Luxury Travel On Budget By Making Use Of These 20 Easy Tips And Hacks!