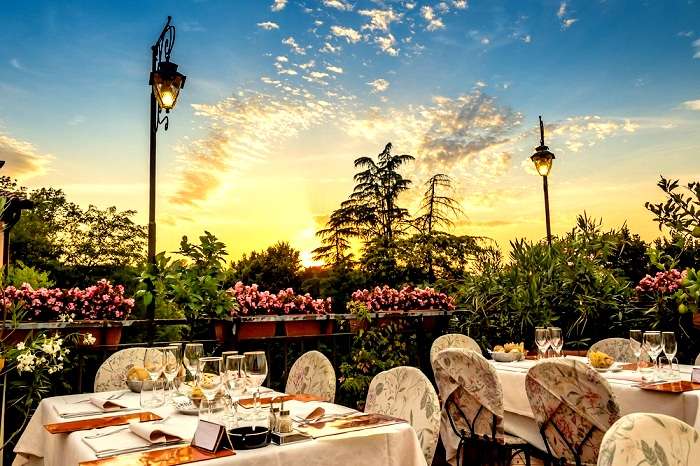 If your belly rules your mind and you are the infamous foodie traveler, then Bologna will sweep you off your feet. What can be better than visiting a city famed as the Food Capital of Italy? Italy is well-known for its iconic Italian dishes and Bologna is the go to destination to try the delectable cuisines. Go crazy relishing Italian delicacies in the gastronomical city of Italy. Being the food capital of Italy, Bologna has many restaurants that serve heavenly food and mostly all restaurants in Bologna are amazing. And, so many choices will surely put you in a dilemma. Don’t worry, go through this list of hand-picked restaurants that you must walk into for having a meal like the locals!

To help you savor the best cuisines of Italy, here is a list of some of the best restaurants in Bologna, Italy which will surely the satiate the foodie in you! Keep scrolling down and read along!

An authentic Italian style restaurant, All’Osteria Bottega is one of the best restaurants in Bologna. The word ‘Bottega’ in Italian means ‘ shop’ and the restaurant literally looks like a shop. Painted with hues of green and peach, Osteria Bottega is an exquisite restaurant which has the vibes of a homely place. If you are wondering how is the food here? Stay assured that you are going to step in a place which serves outstanding Italian dishes like Culatello Di Zibello ham, Petroniana-style veal cutlets and many more that you ought to try. The dessert menu as the owner says and also prepares is quite simple with options like fruit sorbet and Ciambella.

Must Read: 10 Things To Do In Bologna For Experiencing The True Charm Of Italy

Thinking about dining at the Michelin restaurants in Bologna? The one and only Michelin star restaurant in Bologna, Ristorante I Portici is the modern setting restaurant in the famous I Portici hotel. No gastronomic should miss out on this one on their vacay. The food here is as modern as the interiors of the restaurant. Delicious Italian dishes with a touch of modernity in them is served with love to the customers. Some of the must-try dishes made by the most skilled chef are Lasagna with Rabbit, Baked Red Onion, and Olive Ragout.

Suggested Read: Italy In December 2018: Top 5 Places That Take You Through The Best Of This Winter Paradise!

Caminetto D’Oro has been serving traditional Italian food since 1950 and it’s existence dates back to 1930s when it used to sell only breads. Being one of the oldest restaurants in Bologna, Caminetto D’Oro is a renowned restaurant which till date serves original Italian food. If you want to try the food which still has the real essence of how the perfect blend of Italian spices and pasta creates a traditional pasta you should definitely visit it. The restaurant is located at the main street of Bologna and the interiors are as artistic as they can get. As far as the not to miss out on dishes served are considered, Tagliatelle al Ragù will beat everything else on the menu. Don’t forget to try the freshly made bread!

Visited by international celebrities, Drogheria Della Rosa is a chic restaurant opened in place of a pharmacy. Once, where on the wooden shelves medicines were kept now vintage wines are kept and aromatic Italian dishes are served as medicine to relax your hungry stomach. Drogheria Della Rosa is an interesting place where the menu is not set and you are welcomed with a glass of wine. You are personally attended by the owner and you can place your order from the dishes available. You must try their Bolognese Tagliatelle and Cheese tortellini with artichoke.

Located at the well-known twin towers in Bologna, Al Pappagallo is counted among the most famous Bologna restaurants. The interiors are classy and the walls are decorated with the signed photographs of the celebrities who dined here. Even the menu of the restaurant is unique and old styled. The restaurant has a special menu for ladies on which the prices are not mentioned as that’s Italian way. Relish true Italian flavors, by trying their Tortellini in brodo which is the local’s favorite. Other dishes that you must try are green lasagne and Beef tagliata with grilled vegetables.

A marvelous restaurant known for its red meat, Ristorantino Il Tinello is placed in the heart of Bologna. Locals, as well as tourists, love to hangout at this spot. A simple dish like lamb cutlets called the scottadito is prepared in such a way that it pleases every gastronomic who is a fan of cutlets. Don’t forget to add this one on your bucket list as if you are a lover of red meat.

When the streets full of excellent restaurants in Bologna calls all foodies, they must go! This list will surely help you while you explore the streets of Bologna and relish Italian cuisines. So, get packed, pick this guide , plan your vacation in Italy and leave right away!

18 Best Restaurants In Andaman 2020 That Prove The Island Has A ‘Paradise’ For Every Foodie!

4 Exotic Restaurants Near Marina South, Singapore That Are Perfect For Your 2020 Trip!

Traveling To Italy In September 2020? Take A Look At This Quick Travel Guide

13 Restaurants In Himachal Pradesh That Brings The Delectable Taste Of The Himachal Food!