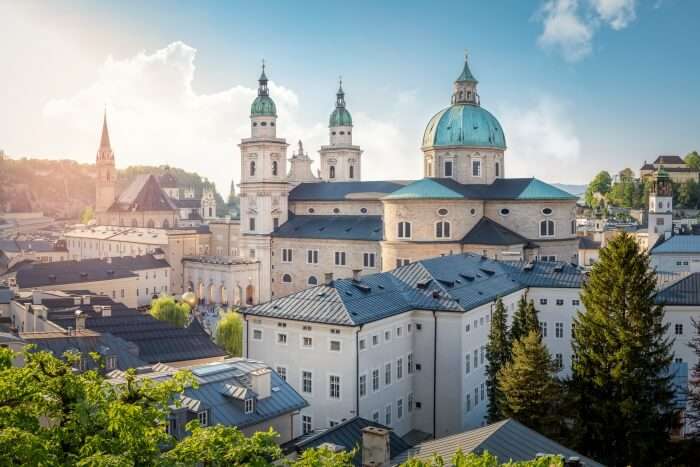 Salzburg had managed to conserve a vibrant urban aura that has evolved over the years from the Middle Eras to the Nineteenth century when it was used to be a city-state governed by a prince-archbishop. Its Resplendent Grotesque art pulled various artisans and craftsmen before the town turned out even famously recognized through the work of the Italian architects. We are here to make you aware of the Salzburg castles that will surely add pleasure and joy to your trip here. Let’s have a look at the most famous castle in and around Salzburg.

Following the ancient piece of art, the city still has lots of castles near Salzburg that are the main spots of attraction for the tourists visiting here from around the places.

Rising high over the town of Salzburg, the fabulous Hohensalzburg overlooks the city, being its central point of attraction for tourist. This castle is the most significant fortification in Europe and plausibly the most wonderful.

Hohenwerfen Castle is an ancient rock fortress, located on a 623 meters mountain facing the Austrian market hamlet of Werfen in the Salzach valley, around 40 km south of Salzburg. The castle is enclosed by the nearby Tennen Mountains and the Berchtesgaden Alps. This is among the most famous castles near Salzburg.

This 900-year-old Fortress lies exalted hovering above Salzachtal. Those who are fascinated for adventure and keen on religion and culture will surely receive the worth of your money in Hohenwerfen. There is a broad variety of recreation and activities for travelers, from the stylish castle inn, guided castle trips with weaponry presentations, a bachelors destination above the traditional state falconry which has hovering displays every day, the primary state falconry museum in Austria, immediate through to individual exhibitions, which varies routinely.

Inside the castle, audio guides are available in 8 distinct languages: German, English, Italian, Spanish, French, Portuguese, Chinese, and Russian. There is the panoramic restaurant to the fortress Hohensalzburg and this Salzburg castle opening hours is 10:00 AM and closes at 9:00 PM.

Must Read: 10 Places That Exhibit Salzburg Nightlife In Full Glory

This incredible historical infrastructure placed just right at the core of the town and utilized for recreation persistence by the Royal family for decades, is now dominated by the Salzburg territory.

It has 3-capacious courtyards and more than 180 rooms. The government utilizes the staterooms, placed on the 2nd floor, to organize crucial state functions, receptions, official meetings, and international conferences. Also situated on the 2nd floor is an art collection - the Residenz Gallery.

Salzburg Residenz is a central point of attraction for tourist; the place is owing to its historical and cultural importance. The palace is situated under Residenzplatz 1 in the city of Salzburg.

Suggested Read: 7 Indian Restaurants In Salzburg With Food That Will Make You Drool

The Middle Eras are hooked to life at the Mauterndorf castle, the old toll plaza and the temporary vacation residency of the Salzburg prince-bishops. It is located on rocks to the northwest market of Mauterndorf. Get to recognize the head of the home Leonhard von Keutschach and his attendants in person and take pleasure of a memorable day.

Far separated from the frenetic pace and the bustle and hustle, yet simple to get to, Mauterndorf Castle in Lungau region of Salzburg is a bizarre gem in art memoir and is placed in an enthralling mountainscape. This is among the most dominating castles in Salzburg, Austria that date back to the thirteenth century. An exhilarating journey through time anticipates you into the late Middle Ages at Mauterndorf Castle. Get to acknowledge the landowners, Archbishop Leonhard von Keutschach and his followers in person. A tour to the 44 meters reinforced tower and Lungau Landscape Museum which has a breathtaking view to Mauterndorf and the bordering mountainscape crosspieces the series on offer for the tourists.

Schloss Aigen is a castle or palace in the south of the city of Salzburg, in the district of Aigen. It is privately-owned property and in postulate not accessible to the ordinary public, but its church is open for the locals and is profoundly honored as a traditional venue for weddings and the parks encompassing it as entertainment.

Schloss Aigen Castle is located right at the root of Mount Gaisberg, which appends to its charm - besides with a popular eatery in among the former government infrastructures of Schloss Aigen. The great Schloss Aigen parks are not as well-maintained as they supposed to be, but the idyllic scenery with a gorge and waterfall is still a valid justification for a short hike there.

Since the year 1921, the palace is occupied by the descendants of the once royal family - Counts von Revertera yet holds it even today also; alas, they do not stay there, as the palace itself is in somewhat poor condition.

Suggested Read: 10 Super Awesome Things To Do In Salzburg, The Birthplace Of Mozart

The considerably famous Mirabell Palace is constructed across a north-south axis and turned towards the Salzburger Dom cathedral and the Hohensalzburg Fortress. It is among the most favorite Castles near Salzburg that is an excellent point of attraction for the visitors around the globe. The opening gardens were renovated as per the plans proposed by Johann Bernhard Fischer von Erlach supporting the Prince Archbishop Johann Ernst Thun's reign in the year 1689.

Only a few decades later, Franz Anton Danreiter changed them again in the year 1730, casting what is now contemplated to be one of Europe's most magnificent Baroque gardens. Then after the Mirabell Gardens were again modified in the 19th century, various parts were destroyed, such as the older dwarf garden (Zwergerlgarten), the well-known Sala Terena in the Northwest of the Mirabell Castle and a few arcades addressing Mirabell square.

The Mirabell Gardens oldest part - Grand Parterre is yet protected. If you get into the pit from the Makartplatz (where the Doppler birthplace and Mozart′s living house are), you will meet an outer and inner balustrade that is bordered by portraits of the 2 Borghesian fencer couples belonging to the late seventeenth century. The outer couple is prepared by M. B. Mandl, and inner one by A. Götzinger.

Further Read: 10 Places To Visit In Salzburg For A Perfect Holiday In The Most Musical City Of Europe!

The castles and fortresses here at Salzburg have added a new wing to the charm of the town by making it rich in ancient architecture and buildings. These architectural beauties allow us to experience the exclusive piece of building art that is rare to notice in the construction of the modern world. We have discussed above some of the most famous Salzburg castles, the tourists who are here are requested to must visit them for a wholesome experience on their trip to Europe.