All You Need To Know About Sanchi Stupa in Bhopal 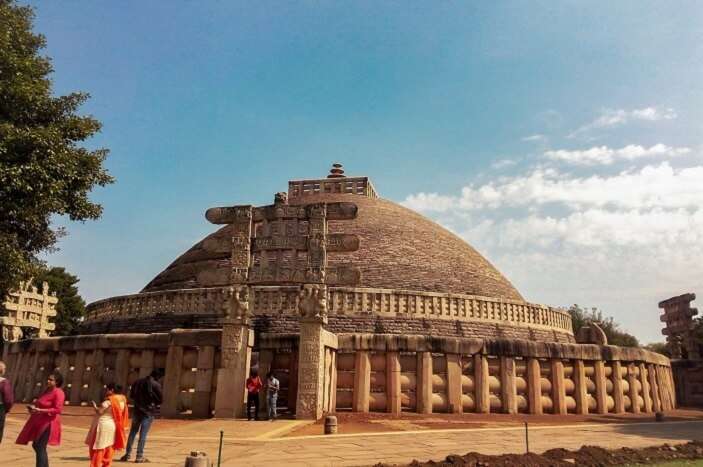 “Better than a thousand hollow words is the word that brings peace.”- Gautam Buddha

Buddhism shares the goal of overcoming the suffering and attainment of Nirvana, the ultimate state of soteriological release. Why not experience the sterling teaching of Gautam Buddha at the great Sanchi Stupa, the monument reflecting gem of Buddhist art and architecture?

Sanchi Stupa is one of the oldest stone structures in India built during the Mauryan period. The sculptures, monuments and lush gardens of Sanchi Stupa have been designated as the World Heritage site by UNESCO.

Sanchi, a small village is located at the foothill very close to the capital city of Madhya Pradesh, Bhopal. The place attracts wanderers from across the world with its ancient Stupas, monasteries and prosperous Buddhist culture. The Great Stupa at Sanchi is one of the best-preserved Stupas with its ornamental gateways attracting thousands of pilgrims and travellers. Following is a complete guide of Sanchi Stupa that will uncover interesting facts about the place.

Must Read: 8 Enchanting Resorts In Bhopal That Prove Simplicity Is Beautiful Indeed

Read on to know in brief about Sanchi Stupa and get better insights into the renowned architecture of India.

The foundation stone of Shanti Stupa was laid by one of the greatest emperors of India, Ashoka, the instigator of the Maurya dynasty. He commissioned the inception of Stupas to redistribute the mortal remains of Lord Buddha in the third century BCE. This huge hemispherical dome is 54 ft. high, comprising of a central chamber where the relics of Buddha have been placed.

The hemispherical edifice of present-day Sanchi Stupa is double in diameter. The wife of Ashoka, Queen Devi and their daughter Vidisha supervised the construction of this monument. A sandstone pillar that has the inscriptions of Schism Edict by Ashoka along with ornated spiral Brahmi characters resembling conch shells referred to ‘Shankhalipi’ was also established in the site. The lower portion of the Sanchi Stupa architecture is still grounded, whereas, the upper portions are kept under a canopy called Chattra.

Pushyamitra Shunga, the general of the Maurya Empire killed Brihadratha Maurya, the last Mauryan Emperor in 185 BCE and established the Shunga Dynasty. It is believed that the Stupa was destroyed during the second century BCE, the period when Shunga Dynasty came into power. Later it was reconstructed by his son, Agnimitra.

During the reign of Shunga Dynasty, the expansion of the Stupa was nearly doubled than its original size. This time a flattened dome was constructed using stone slabs that covered the actual brick Stupa. The dome is crowned by three superimposed umbrella-like structures which symbolize the ‘Wheel of Law’ that’s Dharma. The seat of the dome is a high rounded drum that can be reached through a double staircase.

Sanchi Stupa is known for its unique architecture. Anda, Harmika, Chhatra, and many other constituents of the Great Stupa can be experienced by visiting the site. This place is also surrounded by some of the most captivating places in Bhopal. Following are the three fundamental features of Sanchi Stupa.

Suggested Read: 7 Picnic Spots Near Bhopal For All Those Seeking Relaxing Retreat With Loved Ones In 2021

The domed shape Anda with green highlights portrays the mound of dirt that was used to cover Lord Buddha’s remains. It has a solid core that cannot be entered. The earliest Stupas contained the actual relics of the Buddha where the relic chamber was buried deep inside the anda, called tabena. With the passage of time, the hemispherical mound has taken the symbolic association characterizing the mountain home of the gods at the centre of the universe.

Suggested Read: 10 Captivating Places To Visit In Bhopal – The City Of Lakes…

The Harmika that’s the red highlights is inspired by a square railing that surrounds the mound of dirt, making it a hallowed burial place.

The Chattra was procured from the umbrella, placed over the mound to protect it from elements. As the symbolic value of Anda expanded over time, the central pillar that holds the umbrella was set to represent the pivot of the universe. The three circular umbrella-like disks represent the three jewels of Buddhism; that’s Buddha, Dharma and Sangha.

Around these three fundamental blocks of Sanchi Stupa, the following are some secondary establishments:

It’s the wall with trademark i.e. three horizontal stone bars, surrounding the entire site. The wall is marked in light blue highlights with toranas in yellow.

It’s the terrace surrounded by a three-bar railing. It supports the Anda and raises it off the ground. It serves as the platform for ritual circumambulation.

Suggested Read: Monsoon In Madhya Pradesh: 5 Best Places To Visit In The ‘Heart Of India’

Sanchi Stupa facts lure history lovers from across the globe. From its inception till the present-day the Great Stupa endured numerous modifications. The following are the interesting facts and features of Sanchi Stupa in Bhopal:

The best time to visit Sanchi is from November to March, as the temperature of this place is quite high during summers. Visiting Sanchi in the monsoon will also give you a majestic experience, though you may find difficulty in travelling around the city.

Sanchi Stupa Timings: One can visit the Sanchi Stupa from sunrise to sunset. You can also experience this place on a road trip from Bhopal.

As Sanchi Stupa is located near Bhopal, Travellers prefer to take a cab from Bhopal to the Stupa complex. The nearest Airport to Sanchi is the Raja Bhoj Airport in Gandhi Nagar, Bhopal. Sanchi has its own railway station that’s Sanchi Railway Station which is well-connected to the different part of the country. The Sanchi Stupa is merely 1.5 kilometres away from Sanchi railway station.

The magnificent structure of Sanchi Stupa attracts travellers and pilgrims from across the world. Plan a trip to Bhopal to experience the historical palaces, magnificent monuments, ancient shrines, engaging museums and enticing natural beauty.

Why was the Sanchi stupa built?

Sachi Stupa was commissioned by Ashoka in the third century. The emperor was closely connected to Sanchi as he married the daughter of a local banker there who gave birth to the two sons of Emperor Ashoka. According to the texts, the stupa was erected by the efforts and dedication of the emperor’s wife.

What are the best places to visit near Sanchi Stupa?

There are numerous beautiful and interesting places to visit near Sanchi Stupa. You can take any of the tourist circuits in Madhya Pradesh for a perfect vacation.

Where is stupa at Sanchi?

The Sanchi Stupa is located nearly 46 kilometers in the northeast of Bhopal, the capital city of Madhya Pradesh. The stupa is quite popular amongst the history lovers and has been entitled as the World Heritage Site by the UNESCO.

How many stupas are there in Sanchi?

There is one stupa in Sanchi which is known for its magnificent architecture and enormous structure.

How do I get to Sanchi Stupa?

The nearest airport to Sanchi Stupa is the Raja Bhoj Airport located in Bhopal. If you are planning to travel via rail then Sanchi Railway Station is the nearest one.

What does the great stupa at Sanchi symbolize?

The great stupa at Sanchi symbolizes enlightenment. The circle or wheel depicts the unmoving center which can be attained by a follower in the form of stillness and peace by following Buddhist teachings.

What do the gateways of Sanchi Stupa depict?

The northern gateway of Sanchi Stupa depicts the miracles connected to Buddha through a beautiful wheel of law. The southern gateway showcases the birth of Buddha. The easter gateway foresays the stories of Gautam Buddha’s life and the fourth gateway that is the western gateway exhibits the seven incarnations of Buddha.

What does stupa symbolize?

The stupa is a symbol of Buddha and more precisely the symbol of enlightened mind and presence.

Sakshi Awasthi, an ardent traveler by heart is a Research Scholar from the University of Delhi. Unveiling the untold story of historical sites and encountering the impeccable beauty of nature, turned her to be a Travel Blogger. Currently, working as a Senior Content Writer with TravelTriangle.