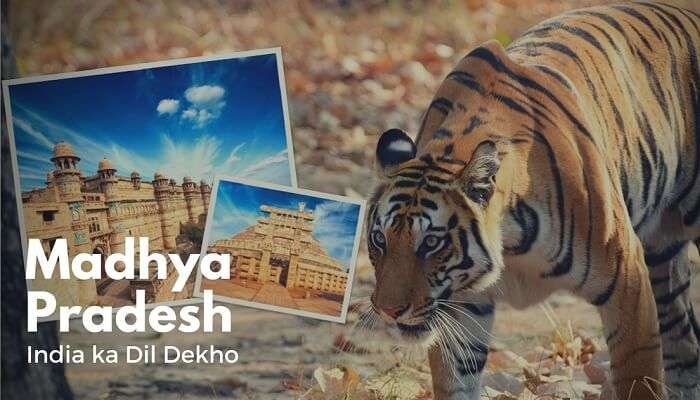 It takes more than just the physical location of a state to be called the Heart of India. Madhya Pradesh tourism justifies the title of Hindustan ka Dil with the state’s grand forts, varying topography, exhilarating wildlife, numerous caves & rock structures, and myriad temples. But the huge state that MP is, it is almost impossible to cover it in one trip.

Thus, planning for tourist circuit in Madhya Pradesh seems a better idea. Have a look at these most popular MP tours before you plan a holiday in the central state of the country.

Here is a map for Madhya Pradesh tourism.

October to March is the best time to visit Madhya Pradesh. During these winter months the average temperature ranges between 5° Celsius and 27° Celsius.

The most appropriate time for visiting a place differs for everyone and thus can last round the year. If you are considering various essential aspects then weather is one of the most vital factors which can lay an impact on your travel. Madhya Pradesh is acknowledged as hot so it is advisable to carry warm clothes with you.

Must Read: 10 Best Things To Do In Gwalior: The Glittering Gem Of Madhya Pradesh

The best tourist circuits in Madhya Pradesh is what makes it stand out owing to splendour and radiance of temples, forts, stupas and hill stations. Check out the following lists for an idea about the tourist circuits.

Of all the tourist circuits in Madhya Pradesh, this tour lets you explore the various colors of the state. Regardless of your nature of visit – honeymoon, family tour, or a trip with friends – to the central state of India, you will surely be mesmerised. There are caves, temples, historical monuments, lakes, and waterfalls that are covered in this MP tour.

Suggested Read: 10 Captivating Places To Visit In Bhopal – The City Of Lakes

If you wish to cover the most popular tourist places in Madhya Pradesh, you must take this tour. The history buffs, in particular, will love the visit to the some of the best monuments of the MP tourism that the trip has to offer.

Suggested Read: 20 Most Famous Historical Places In India: You Think You Know Them Well Enough?

This popular circuit of MP tourism is a delight for the nature lovers. Travelers can have the best wildlife experience in India with the Kanha national park and the Bandhavgarh national park. The white marble caves & the splendid Dhuandhar waterfall of Bhedaghat and the tourist attractions of Mandla & Jabalpur only add to the wonderful experience of this MP tour.

Which of these MP tours are you planning next? Take a tour of Madhya Pradesh and share your experiences with us. These were some of the marvels and best tourist circuits in Madhya Pradesh which will surely charm your spirits. Madhya Pradesh will essentially enliven your senses by giving you relaxing and comforting getaway from your monotonous stressful life.

20 Picturesque Places To Visit In Tawang You Can’t Skip In 2021!

25 Best Beaches In Andaman And Nicobar Islands Water Babies Must Visit In 2021!