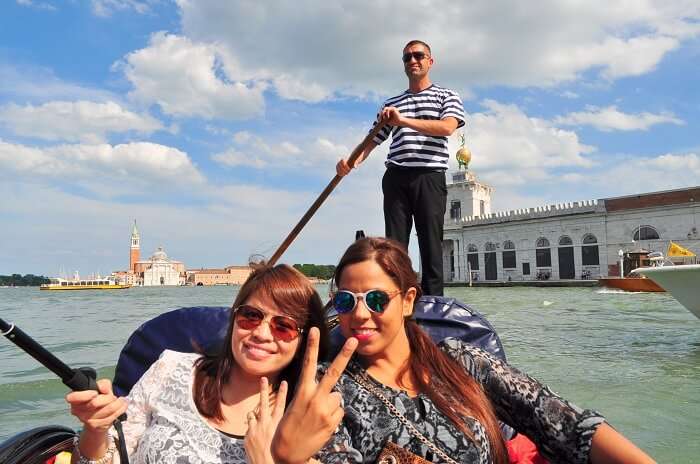 Shreshth and his family pick up their hats and step out under the Tuscan sun for a week-long vacation to Italy. Read his journey to experience the rich and diverse history of Italy,  filled with stories that are narrated by the Italian architecture in a very dynamic and cultural manner. He took a package via TravelTriangle for INR 303000 that included the tickets, accommodation, breakfast and transfers.

I got myself in a dilemma when my family asked me to plan a trip to Europe. The idea of hopping countries in every few days across an open border continent didn’t look like an appealing idea to me. Traveling to a country like Italy and spending a week there with my sister and mother looked like a very exciting prospect.

After searching on the internet for various travel packages to Italy, I came across the Travel Triangle website which provided me with an option to customize packages according to my needs. I found this feature really handy to develop a personalized vacation experience.

Soon I was contacted by a representative from Travel Triangle who linked me to various agents providing me with packages from Italy. I found the best package via Memorable Vacation & Holidays. The excitement was building up as we were all set for our family vacation to Italy.

We boarded our flight to Venice from Delhi early in the morning and had a layover in Dubai. We reached Venice in the afternoon, after which we were met by a representative from the Travel Agency who took us to the hotel.

We checked into the hotel in the evening. The beautiful architecture and functioning of this unique city amazed us. To see people living in a city of canals and not roads is truly distinctive. We thought of exploring the streets of Venice in the evening by taking a small boat ride. Later on in the evening, we went out for dinner before calling it a day.

Having rested and shaken off our jet lag, we woke up fresh in the morning, had some breakfast and got ready for the Venice Tour. We were scheduled to visit Murano, Burano, and Torcello.

Our tour started with a visit to Murano. It is a group of Islands in Italy which is famous around the world for its glass making workshops. Many of the glass factories and workshops are artisanal in nature and offer a live demonstration of their work.

Onward we went to Burano. The colourful and vibrant archipelago that is renowned for not only its colorful houses but also for its school of lace-making. Seeing so many colors splattered all over the houses in that Island was a treat for sore eyes. We felt a very positive vibe around Burano. I guess all the colors lit our mood up.
The final stop of our tour was Torcello. It is a quaint and scantily populated Island in the Venetian area. The main attraction in Torcello were the beautifully crafted mosaics on the walls. After visiting every island in Venice, I became ever so surprised at the unique identity every small place has in this city despite being in close proximity.

In the evening, we were transferred to the St. Mark’s Square which happened to be the most popular sightseeing spot in Venice. Later on, we took a Gondola ride around dinner time to explore the back lanes of Venice. Dinner for us was the usual pizza and some pasta, as finding vegetarian food in Italy can be a task.

Suggested Read: Honeymoon In Europe: We Wanted To Go Back In Time Without Compromising On Comfort & Luxury

The Venice experience had us filled with excitement and anticipation for things to come. After having a quick breakfast, we were transferred to the train station where we took the 11 am train to Florence.

We checked into our hotel in the late afternoon and immediately went looking for a cafe around our hotel for lunch. Finding variety in food for vegetarians in Italy can be a tough task. It feels pretty monotonous after a few days of constant Margherita pizzas and plain pastas. We found some time to rest in the afternoon and catch up on some lost sleep as our schedule for the later half of the day was free.

The atmosphere in Florence was very different to that of Venice. The people in Venice were very cold. The experience could have differed for others but, at least that’s what my family and I observed. Even little things like room service in Venice is also provided only if people pay extra for it.

Florence, on the other hand, had a more young and enthusiastic crowd. The party atmosphere was very much visible as late in the evening we witnessed a parade which was very lively and enjoyable. It was almost as if the Florentines were the flag bearer of spirit and vibe in the country.

We got ready for our next adventure which was scheduled to take us to visit the Leaning Tower of Pisa. We were clubbed along with few other tourists and sent on a bus trip to Pisa. It was a total delight passing through the picturesque and almost surreal hills of Tuscany. It felt as if the great painter Michelangelo painted these hills themselves.

Upon reaching the Leaning Tower, the bright and sunny weather added to our experience. Seeing the world famous monument and learning about how it’s leaning structure became so popular was informative and fascinating. After a few hours, we returned to Florence via the tourist bus.

Later in the afternoon, we had time to visit the famous spots of Florence. Due to the long summer days and sun setting after 8.30pm, it gave us plenty of time to cover the popular tourist spots.

Visiting the picturesque Florence Cathedral was next on my list. The dome of the Florence Cathedral could be visible from anywhere in Florence. The Cathedral situated in the Piazza del Duomo was the hallmark of the city. The sculptures and carvings on the outside and the paintings on the inside walls are absolutely breathtaking. I think by far this was the best church I’ve ever seen in my life.

Getting a chance to catch the sunset near the River Arno was a delight. After it grew dark, we had dinner and proceeded back to the hotel for the night.

Arguably, the most popular city in Europe awaited our arrival. After breakfast and checking out from Florence, we bid farewell to this beautiful city and head to Rome. The amount of history associated with Rome, as one would imagine, is intriguing. The city is filled with monuments of historical significance.

The hotel in which we stayed in Rome was called the Gioberti Art Hotel. This place was by far the most unique and stylish hotel I’ve ever been to. I was really impressed by the artwork and the chic design with which the hotel was constructed.

The first evening we had in Rome, we planned to take it easy and settle in. Around dinner time we got a chance to explore the place around the hotel where we managed to find an Indian restaurant for dinner. The food although, not being up to the mark, was a welcome change from the standard Italian cuisine.

Suggested Read: Europe Tour: The True Essence Of Europe Captured In A Span Of 8 Days

Our day began with breakfast at the hotel and then we got ready for the city tour. We got ourselves a 2-day pass for the Hop-on Hop-off Rome Bus Tour.

The city tour covered the important tourist destinations. Starting the tour with Termini Station, Santa Maria Basilica, and Circus Maximus. Moving on to the major locations we spent our time on, were St Peter’s Square and the Basilica in Vatican City which is also home of Catholicism and the Residence of the Pope.

Walking around in the stone-brick St Peter’s Square gave us a panoramic view of the Papal residency and the St Peter’s Basilica. The Square was apparently made this big so that the maximum number of people can take the Pope’s blessings from his balcony.

The insides of the Basilica were absolutely massive. The grandeur of being inside the largest and the most important Basilica in the world was truly moving. Later on, we ended our Hop-on Hop-off bus tour and proceeded back to our hotel and retired for the night.

Our final day in this glorious country was here. Although, we had a little time on us to explore a little bit of Rome which we chose to skip yesterday. We decided to visit the Colosseum as a part of our Hop-on Hop-off City Bus tour.

The Colosseum is a very impressive architectural marvel which has been preserved for thousands of years. The most astounding fact about the place is that it is still the largest amphitheater ever built in the world. We returned from the Colosseum in the afternoon and checked out of the hotel. We were transferred to the international airport in Rome from where we took our flight back to India.

Looking back, I’m really satisfied with the output of the vacation. I got to spend some quality time with my family which otherwise becomes difficult in our day-to-day environment. Going on a family vacation to Italy instead of country hopping in Europe for 10 days is certainly the better way to travel.

After spending the week in Italy, I feel I have a better understanding and appreciation of Italy and it’s different cities. Italy, very much like India, is rich in culture and tradition.

Turn back time with a magical adventure to Italy  For an experience unlike no other, Book your package to Italy now!

3 Girls, INR 3000 And One Wonderful Trip To McLeod Ganj! #HacksIncluded